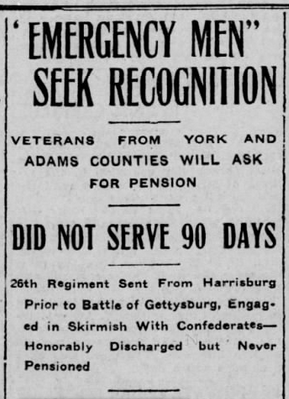 The problem was that the governor had called for 50,000 men, more than seven times the number that actually showed up to serve. Part of the unexpectedly weak turnout was confusion over whether the volunteers would really only serve during the emergency and then would be mustered out back into civilian life, or would they be forced into 3-year regiments? Another factor was the season of the year. It was summer harvest time, and many Pennsylvania farmers and farm workers wanted to stay home and gather their crops and hay. Others had already served in the military and figured they had performed their duty. And, finally, anti-war sentiment was growing in Pennsylvania. Judge George Woodward, a “Copperhead” pro-peace Democrat was gaining support in southern Pennsylvania.

A company of the new 26th Pennsylvania Volunteer Militia had been raised in Hanover from men from the surrounding area as far south as Union Mills, Maryland. They traveled to Harrisburg, mustered in, received their weapons and training, and were soon on a train heading back through Hanover to defend Gettysburg. On a rainy, dismal June 26, west of Gettysburg, they retreated in the face of Jubal Early’ oncoming veteran Rebels. At least 175 of their number, including more than a dozen York Countians, were taken prisoner in separate skirmishes at Marsh Creek, Gettysburg, and the Henry Witmer farm. They were eventually paroled, minus their shoes and equipment.

Years later, the surviving emergency men sought formal pensions as Civil War veterans, much like their counterparts in the longer-term regiments. Here is an article on the subject from the February 6, 1908, issue of the York Daily.

“Believing that they should have some recognition for their services during the Civil war, the surviving members of the Twenty-sixth Regiment of volunteers, or “Emergency Men,” living in York and Adams counties, have started a movement toward having a special pension bill passed by congress. A petition will be sent to Congressman [Daniel F.] Lefean requesting him to take some step in behalf of the members of this regiment, the members of which are debarred from a pension because they did not see ninety days of service.

“The ‘Emergency Men,’ one company of which was raised in Hanover and another in Gettysburg [the latter were mostly students from the local college], was sent from Harrisburg to Gettysburg on the 2[6]th day of June, 1863. The regiment had a skirmish with an advanced guard of Confederate cavalry [Lt. Col. Elijah V. White’s 35th Battalion,  Virginia Cavalry] about two miles west of Gettysburg [and then retreated northeasterly to the Witmer Farm], at which time 125 of their men were captured by the Confederates [in this second skirmish, the antagonists were the saddle soldiers of the 17th Virginia Cavalry]. The regiment formed in line of battle, fired three volleys at the Confederate cavalry, and caused them to retreat. The ‘Emergency Men’ then went to Harrisburg, where they remained until the term of their enlistment expired, namely when the Confederates had left Pennsylvania. [Actually, the emergency men helped in the pursuit of Robert E. Lee’s retreating Army of Northern Virginia down into Maryland before being recalled.]

“For this service, some of the veterans who were members of the regiment believe that they should have some recognition from the government. A few of those who served in  the regiment were Colonel Jennings, of Harrisburg; Lieutenant Colonel Joseph Jenkins, of Hanover; Captain [John S.] Forrest, of Hanover; ex-Governor Pennypacker; George E. Sherwood, of York; and B. E. Himes, of Glen Rock.” John Forrest had been one of the men taken prisoner during the 26th PVM’s retreat from Witmer Farm toward Good Intent School.

In April 1911, three years after the article appeared in the York Daily, the state legislature debated the Gray bill, which stipulated formal pensions for emergency men to the total of $1,300,000. It failed to gain sufficient support. Efforts were renewed in June 1911, when a new bill asking for $810,000 to give each emergency man $7.50 per month finally passed. In 1915, the state tried passing the buck, sending a resolution to Washington asking that Congress approve the pensions from Federal funds.

To read much more about the Hanover emergency men and their comrades in the 26th Pennsylvania Volunteer Militia, pick up a copy of Scott Mingus’s book, Flames Beyond Gettysburg: The Confederate Expedition to the Susquehanna River, June 1863 (Savas Beatie, 2009).