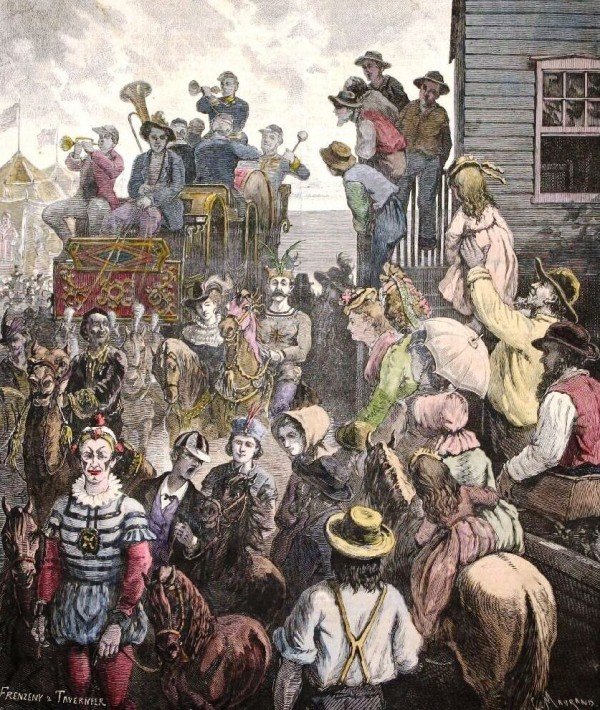 On June 30, 1863, several thousand veteran cavalrymen clashed in and around the streets of Hanover, Pennsylvania, in the largest battle known to have been fought in York County, Pennsylvania. Occurring the day before the Battle of Gettysburg began, the Battle of Hanover pitted a division of Union cavalry under Brig. Gen. H. Judson Kilpatrick (an ancestor of CNN broadcaster Anderson Cooper) versus the Confederate brigades of famed Maj. Gen. Jeb Stuart of Virginia.

More than 300 soldiers were gunned down or slashed with sabers in fighting that at times was hand to hand, particularly in the opening stages of the battle along Frederick Street. It marked one of the deadliest fights in the week before the massive battle at Gettysburg, but the battlegrounds are long gone, swallowed up by suburban sprawl in the 2oth century.

Among the victims was an Ohioan who before the war was a clown with a traveling circus. Here is his story…

Henry Holman was born in 1838 in Steubenville, Ohio, a bustling town along the Ohio River in the eastern part of the Buckeye State. Not much is known of his early life, but as a young man Holman lived a life of adventure that most lads could only dream about. He performed in a circus, traveling the region and entertaining countless numbers of spectators.

When the Civil War erupted, Holman and several of his friends and neighbors in Steubenville enrolled in what became the 1st West Cavalry (it was not uncommon in the Civil War for regiments to accept companies from neighboring states).

During the fighting at Hanover, Holman suffered a gunshot wound to his face in the fighting near Baltimore Street. He was taken to the home of Mrs. Agnes Spangler and laid on the porch, where Dr. John Culbertson dressed his wound and made him as comfortable as possible.

Hanover was the last time Henry Holman fought in a Civil War battle. His injury was too severe for continued service, so on September 8, 1863, the commander of the Middle District, Maj. Gen. Robert F. Schenck (a fellow Buckeye) signed an order granting Holman a medical discharge from the Union army.

Holman returned to Steubenville to recuperate. He became a prominent citizen and lived for many years, actively participating in veterans events as a proud member of the 1st West Virginia Cavalry. He contracted a severe case of pneumonia in February 1898, dying in his home in March. He was buried in Steubenville’s Union Cemetery.

His bereaved widow, Rebecca E. (Prosser) Holman, soon placed an ad in the local newspaper, thanking the community for its outpouring of support and sympathy for her and her late husband, and also publicly thanking her husband’s life insurance company for its prompt payment of her claim. Mrs. Holman lived until 1937, dying at the age of 90.

Henry Holman may be the only known circus clown shot in the entire Gettysburg Campaign, and it happened here in York County.

Adapted from the upcoming book More Civil War Voices from York County, Pa., by Scott L. Mingus, Sr. and James McClure, to be published in 2013 by Colecraft Industries of Orrtanna, Pa.

Volume 1 of this planned 2-part series can be purchased from the publisher, or at local bookstores in the York, Gettysburg, and Mechanicsburg areas, or from the Internet at amazon.com.