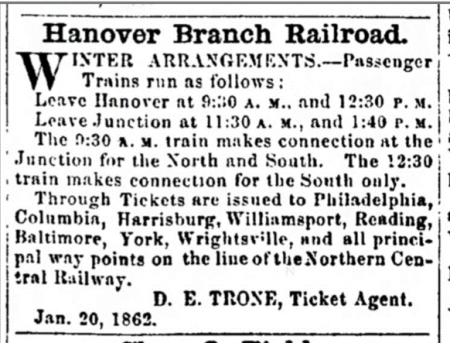 The Northern Central Railway ran from Baltimore north through Harrisburg to Elmira, New York. The NCRY dominated railroad transport in York County throughout the middle and latter part of the 19th century. Enjoying major contracts with the U. S. government, it carried tens of thousands of Union troops. The railroad also shipped massive quantities of coal, lumber, grain, ammunition, weapons, uniforms, tents, cannon, limbers, horses, mules, tents, blankets, and more. In 1863 alone, the NCRY shipped 107,000 tons of low-smoke anthracite coal to Baltimore, largely destined for the U. S. Navy. The Northern Central served as the main link for passengers headed to Maryland or upstate New York, or to the many connections available at Harrisburg and Columbia.

At Hanover Junction in southern York County, the NCRY tracks intersected those of a former subsidiary, the Hanover Branch Railroad. The HBRR, headquartered in Hanover, connected the NCRY with the Gettysburg Railroad. A spur line ran from Hanover to Littlestown. Residents  could get on a train in those towns and subsequently ride down to Baltimore or northward to dozens of locations. The HBRR carried freight (mostly grain and produce) but did not have much in the way of military traffic during most of the war.

The major exception was October 1862 when two regiments of Union infantry rode the NCRY to Hanover Junction. Then, they took the HBRR to Gettysburg. They were headed there to thwart J.E.B. Stuart, who had led more than a thousand Confederate cavalrymen on a raid on the Cumberland Valley Railroad’s facilities in Chambersburg. He had headed east toward Gettysburg after burning the CVRR rail yard facilities. Colonel James Beaver (the namesake of Penn State’s Beaver Stadium) and his troops returned to Baltimore via the HBRR after Stuart turned southward near Fairfield in western Adams County and returned to Virginia.

The Hanover Branch Railroad traced its history back to 1851, when investors received a charter to construct a line from Hanover through southern York County. As I write in my book on the Northern Central Railway, the HBRR would intersect it “at a point 46 miles north of Baltimore and 12 miles south of York. In April, the HBRR purchased property, including a two-story, wood-frame house owned by Reuben and Mary Reiley in North Codorus Township. Crews soon began constructing a three-story, wooden-framed depot at Hanover Junction… The Hanover Branch Railroad became a separate entity in 1855 with Adbiel Wirt Eichelberger as president. The HBRR maintained its strong working relationship with the Northern Central, including selling through tickets good on either line.”

During the Gettysburg Campaign in late June 1863, Confederates of the 35th Battalion, Virginia Cavalry burned bridges on the Gettysburg Railroad and HBRR. They also torched the Hanover Branch’s turntable at Hanover Junction and several company-owned railroad cars. Fortunately, the locomotives escaped damage, with all but one having been previously moved to safety. That one, sitting at Hanover Junction, was ready to leave after a telegraph arrived on the morning of Saturday, June 27, with news that the Rebels were in Hanover. As I wrote in Soldiers, Spies & Steam: A History of the Northern Central Railway in the Civil War, “Conductor John Eckert reportedly ordered the engineer of the Heidelberg to put on more steam and hurry away to Baltimore. Eckert exclaimed that the Rebels ‘shall not have the train if we can help it.’ The depot’s senior telegrapher jumped on board as the train roared south toward Glen Rock.”

In the weeks after the battle of Gettysburg, the Hanover Branch Railroad carried more than 11,000 wounded men (Union and Confederate) from Gettysburg to Hanover Junction or Littlestown. The U. S. Christian Commission, a relief group, manned stations at the junction to pass out snacks and drinks to the injured soldiers. Perhaps the best-known passenger was Maj. Gen. Daniel E. Sickles, taken on a stretcher from the battlefield to Littlestown. There, soldiers laid the stretcher across two seats on a passenger car, and the train soon whisked the general and scores of other wounded men to Hanover Junction. Sickles was then taken south through Baltimore to Washington, D. C., to recuperate from an amputated leg. The HBRR carried hundreds of coffins to and from Gettysburg, their eastbound contents headed for graveyards across the North.

On November 18, 1863, the HBRR carried President Abraham Lincoln and a 100-person contingent of politicians, bandsmen, choir members, and soldiers from Hanover Junction to Gettysburg. Lincoln was scheduled to deliver a few dedicatory remarks at the ceremony the following day to dedicate the new national cemetery before returning that evening to Washington via Hanover Junction and Baltimore. Several reporters and ceremony attendees who also rode the HBRR complained bitterly about the roughness and unevenness of the tracks. It resulted in an uncomfortable, jostling ride. Photographs reportedly taken on or about November 18 may show Lincoln, though likely not.

Following the battle of Gettysburg, the HBRR transported large numbers of battlefield visitors, including thousands of veterans who returned after the war for quiet personal visits or for more formal large-scale reunions and anniversary remembrances. Freight trains brought some of the sculptures and government-issued markers destined for the post-war battlefield park. Eventually, the HBRR became part of the Western Maryland Railroad system and ceased independent operations.

Researchers Robert L. Williams and Ray Kinard have recently been studying the Hanover Branch Railroad in preparation for a planned book. If any York Daily Record or Cannonball readers have documents, photographs, or articles related to the HBRR, please contact me at scottmingus@yahoo.com.