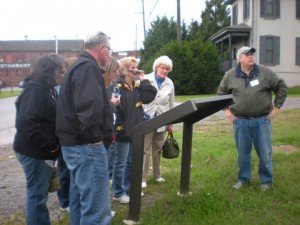 Author and tour guide Scott Mingus explains the historic significance of the pre-Civil War lime kilns along Front Street in Wrightsville, Pennsylvania on September 17 to members of the Greater Pittsburgh Civil War Round Table. Photo courtesy of Ulli Baumann.

Join author Scott L. Mingus, Sr. and us for a tour based on his book, “Flames Beyond Gettysburg: The Confederate Expedition to the Susquehanna River, June 1863.”

While the Battle of Gettysburg remains the centerpiece of the June/July 1863 campaign, there is an increasing interest in less-studied peripheral events that were an integral part of the operation. One such event occurred on June 28, 1863 – the action at Wrightsville, Pennsylvania.

Come join Scott Mingus for a special guided tour of the sites in and around Wrightsville associated with the Gettysburg Campaign. More than 4,000 combatants fought at Wrightsville, making it the second largest military engagement in York County’s history in terms of numbers.

In issuing his orders for the Confederate invasion of Pennsylvania, General Robert E. Lee instructed Lt. General Richard S. Ewell to capture the state capital of Harrisburg if it ‘comes within your means’. One of the Confederate objectives to do this was to seize the long covered bridge across the Susquehanna River between Wrightsville in York County and Columbia in Lancaster County. Ewell later ordered Major General Jubal Early to destroy the bridge, but Early instead decided to send Brigadier General John B. Gordon’s brigade to try to capture the bridge intact, cross into Lancaster County, and attack Harrisburg from the rear. Among the defenders in the horseshoe-shaped line of earthworks just west of Wrightsville were the soldiers of the 27th Pennsylvania Volunteer Militia, an emergency regiment hastily raised in the counties northeast of Harrisburg. What happened became a night to remember for soldiers and civilians alike.
While the action at Wrightsville was extremely minor in military terms, it is important to remember that a goal of the Confederate invasion of Pennsylvania was to ‘bring the war’ to the North. With this vital bridge destroyed, the Susquehanna River prevented the Confederate Army from advancing on Harrisburg from the south and the cities of Lancaster, Reading and Philadelphia to the east.

Our tour will provide an overview of the tactics of the Skirmish of Wrightsville, Gordon’s attack plan, and the burning of the Columbia Bridge to prevent Gordon from entering Lancaster County. We will stop at Strickler’s Ridge, Bair’s Mill, and a few other sites associated with the fighting.

The tour will involve both walking and driving with minimal parking areas at certain locations, so car-pooling will be necessary. (Optional side-trip after lunch to the unknown Confederate’s grave along the river, or to Columbia’s Zion View Cemetery depending upon interest levels)

Location: Meet in the northern parking lot adjacent to the John Wright Restaurant at 234 North Front Street in Wrightsville just off U.S. Route 30 (take the Wrightsville Exit and head east about a mile to Route 462 / Hellam Street. Turn left and follow the road to the riverfront. Make a left onto Front Street. The restaurant will be on the right).

Tour Fee: $15.00 per person (includes admission to the Wrightsville Diorama, tour handouts, light refreshments, and a “Meet and Greet” afterward)

Additional Info: Light refreshments will be provided before and after the tour (bottled water, small bags of potato chips and pretzels, and chocolate chip cookies)

“Meet and Greet”: Scott will be available after the tour’s conclusion for further discussion at the John Wright Restaurant located at 234 North Front Street in Wrightsville. Copies of his book will be available for $20.