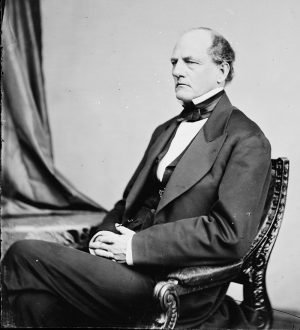 Gubernatorial election in 1863 led to violence in York, Pa.

Pennsylvania’s gubernatorial election in the fall of 1863 proved to be bitter and divisive, with the two candidates at polar extremes of their core beliefs. Incumbent Governor Andrew Gregg Curtin, a Republican from Bellefonte, was a staunch supporter of President Abraham Lincoln and his war policies. That summer, Curtin’s leadership and support for Washington had been put to the test when 75,000 Confederate soldiers invaded the state. Robert E. Lee had sent powerful columns through five counties in south-central Pennsylvania in a massive incursion that resulted in the battle of Gettysburg. As the fall election approached, many of Curtin’s political opponents questioned his decisions and, more importantly, the war effort itself. Passions ran high on both sides of the argument.

Judge George Washington Woodward was an avowed anti-Lincoln Peace Democrat (a so-called “Copperhead” in Republican terms) from Wayne County. He opposed Curtin in the election for governor. Woodward was a former nominee to the U. S. Supreme Court but the Senate had failed to confirm him. He had delivered the Democratic platform at the December 1860 state convention in Harrisburg. In his speech on that occasion, Woodward strongly advocated negotiating with the South to avoid “the irrepressible conflict.” He was quite willing to be flexible on the issue of slavery if it kept the Union together. He traversed Pennsylvania throughout the summer and early autumn, making fiery speeches against prolonging the war.

His proponents often clashed with the Lincoln/Curtin supporters. At times, the harsh rhetoric turned to vandalism, armed violence, and physical confrontation (including a threat to the chief burgess of York).

Here’s one such incident from here in York. The account is from the October 17, 1863, Baltimore Sun, citing the York Press.

“A Row at York, PA. — On the night of the election in York, Pa. [October 13], a row occurred between a few persons attached to the two political parties. The York Press says: A number of windows in the Democratic Cub room, in Centre Hall, were broken in, besides several in our office and in that of Mr. Bittinger’s, the prosecuting attorney, in the building adjoining, owned by Mr. Welsh. Several pistol shots were fired, and it is said, some persons narrowly escaped with their lives. We have not learned who the leaders of this disgraceful affair are, or what caused the riot.”

Curtin went on to handily defeat Woodward 51.5% to 48.5% statewide when the ballots were counted and confirmed. York County, as usual, heavily supported the Democrat. Citizens gave 59.4% of the 13,581 votes cast to Judge Woodward.

A few days later, Republicans and other Lincoln supporters staged a raucous parade to celebrate several recent Union successes across the country. Here is the story from the October 31, 1863, National Republican, an influential paper based in Washington, D. C.

“Celebration of Union victories in York — York, Pa., Oct. 29 — The torchlight procession and illumination which took place this evening in honor of the Union victories achieved in this and other States, was the most extensive and brilliant affair ever gotten up in York. Delegations from all parts of the county were in attendance. The greatest enthusiasm was manifested by the thousands in line and the throngs crowding the sidewalks. Flags, wreaths and Chinese lanterns were profusely displayed.”

Blogger’s note — For those Cannonball readers heading to the annual Remembrance Day parade in Gettysburg this Saturday, I will be signing books at the Gettysburg Heritage Center from 11 a.m. until 2 p.m. You may also pick up signed copies of my Civil War and Underground Railroad books before and after my talk on “The Northern Central Railway in the Civil War” at the Manchester Township Municipal Building at 3200 Farmtrail Road on Monday evening, November 19. The talk is free, as is parking.

For more on Civil War politics — York Countian Scott E. Rosenau will present a free talk on Lincoln and the Founders at the November 14 meeting of the York Civil War Round Table. For details, click here.