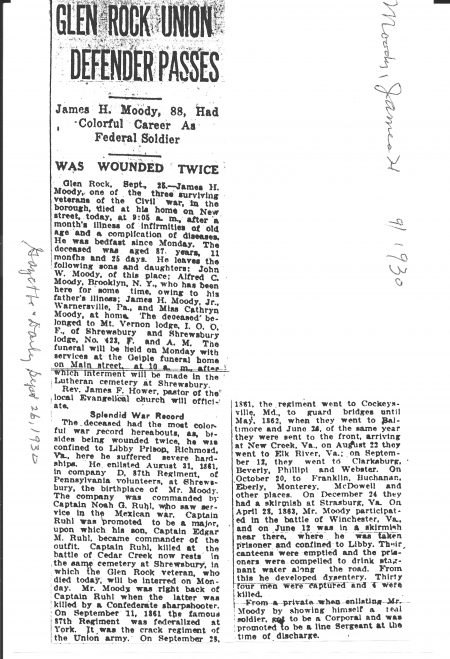 John Hufnagel of the Glen Rock Historic Preservation Society graciously sent me the above newspaper clipping from the York Gazette of January 24, 1930, about a local veteran who had recently died. With the recent focus on the 87th Pennsylvania with the publication of my latest book, The Second Battle of Winchester: The Confederate Victory That Opened the Door to Gettysburg, John’s timing was perfect in sharing this st0ry of one of the thousands of prisoners of war taken in that Union debacle three weeks before the battle of Gettysburg.

At his death in 1930, James H. Moody was one of only three Civil War veterans left in Glen Rock. The 87-year-old Shrewsbury native had been bedfast the last few weeks of his life.

On September 11, the 87th was mustered into Federal service in downtown York. On the 28th, the regiment traveled by rail through Hanover Junction and Glen Rock down to Cockeysville, Maryland, where the men guarded the bridges of the Northern Central Railway until May 1862 when they went to Baltimore.

On June 24, Moody and his comrades were sent to the front lines, arriving in New Creek, Virginia. Over the next few weeks, they guarded railroad lines, bridges, and other important military targets variously in Elk River, Clarksburg, Beverly, Phillipi, Webster, Franklin, Buchanan, Eberley, Monterey, McDowell, and several other places. On December 24, the 87th engaged in a minor skirmish with Rebels at Strasburg in the Shenandoah Valley before wintering in Winchester.

On June 12, Moody was taken captive in a skirmish near Winchester and later transported with a long column of other prisoners to Libby Prison in Richmond. According to his obituary, “their canteens were emptied and the prisoners compelled to drink stagnant water along the road. From this he developed dysentery. Thirty four men were captured and 4 were killed.

“From a private when enlisting Mr. Moody by showing himself a real soldier, got to be a Corporal and was promoted to be a line sergeant at the time of his discharge.”

Moody, upon his release from prison, rejoined his regiment and fought again in the Shenandoah Valley at the October 1864 battle of Cedar Creek. He was standing near Captain Edgar Ruhl when the latter was killed by a Rebel sharpshooter. Ruhl’s body was taken back to Glen Rock for burial in the Lutheran Cemetery.

In 1930, James Moody’s remains would also be buried in the same cemetery.

To read many more stories of the local men of the 87th Pennsylvania at the Second Battle of Winchester, pick up a copy of Eric Wittenberg’s and Scott Mingus’s new book! Copies will be available at the gift shop of the York County Heritage Trust, 250 E. Market Street in York. Co-author Scott Mingus will present a free talk on the 87th at Second Winchester at YCHT at 7 p.m. on Wednesday evening, June 15. The public is welcome!