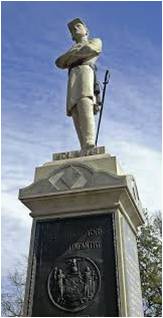 On December 13th, the Harrisburg Civil War Round Table is proud to have one of our own members Ms. Linda Meeneghan give us an overview of Augustus Van Horne Ellis, colonel of the 124 New York Volunteers. He was killed at Gettysburg on July 2nd while charging on the 1st Texas regiment as they attacked the union line near Devil’s Den. Ellis’ life was a series of adventures that culminated in his dramatic death.

Born at West Point Army Hospital and raised in Rockland County, New York, Ms. Meeneghan had a life long interest in military history that was nurtured by her father, a career marine who was permanently disabled in the Korean War. Interest in the Civil War specifically began when she found a Civil War letter written by a relative that had been preserved in the family bible.

Linda received a Bachelors of Music Degree in Music Education from Houghton College and a Masters of Science in Education from the College of New Rochelle. She then worked in adult services for people with developmental disabilities for 18 years. Linda was a charter member of the Rockland Civil War Round Table. After moving to Pennsylvania in March of 2000, she joined the Harrisburg Civil War Round Table in June. Linda is currently employed by Cumberland Valley School District as a special education teacher and works in the high school. When not out on a battlefield or attending a lecture, Linda can be found playing in the Carlisle Town Band and the Frederick Flute Choir.

The Harrisburg Civil War Round Table meets at the Radisson Penn Harris Hotel & Convention Center, Camp Hill, PA, Camp Hill Bypass @ Routes 11&15. An informal reception starts at 6:00 PM, followed by dinner at 6:45. The cost of dinner is $22.00 and reservations must be made no later than 9:00 PM Tuesday, December 10th, by calling 717-512-9250 or email EllieKFeld@comcast.net. The program begins at 8:00 PM and is free to the public.