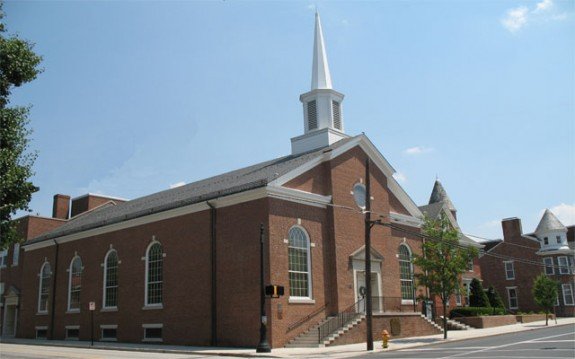 Historic Church Walking Tours of Gettysburg celebrates its 10th season of providing local residents and tourists alike with visits to their historic churches.  On Wednesday evenings during the summer months, church volunteers provide short programs about their church and how it played a crucial role during and after America’s most significant Civil War battle.

When the Battle of Gettysburg ended on July 3, 1863, the two armies left behind more than 22,000 wounded and dying soldiers in this small town of only 2,400 residents. Like most of Gettysburg’s buildings, churches became surgical hospitals. Churches became scenes of both tragedy and heroism.

The visitor will get to see the beautiful features of each church, hear about its history and, in some cases, its use as a field hospital.  Stories of heroic acts by brave citizens will be told through narratives and short skits. Those on the tour will see the pew that President Lincoln sat in when he visited Gettysburg, the stained glass window given in tribute to the Sisters of Charity, plaques and engraved stones dedicated to Union and Confederate soldiers, and the original Methodist Church building which later became a GAR Hall. These and other items of interest will be explained during the tours.

Tours take approximately 90 minutes and begin in front of the Gettysburg Presbyterian Church, 208 Baltimore St., two blocks south of Lincoln Square. Park free at the rear of the church. No reservations are required and the cost of the tour is $5, with children 12 and under free. Two tour times are provided each Wednesday, one departing at 6 and the second at 6:30 p.m. Ticket sales begin 20 minutes prior to each tour.