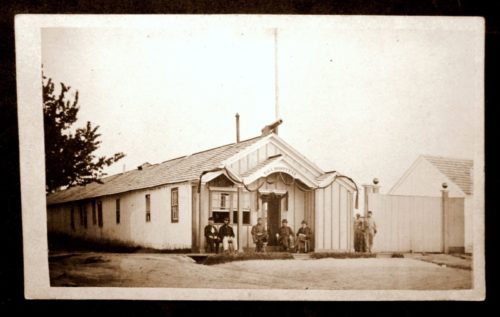 One of the buildings of the US Army General Hospital complex in York, PA (the York County History Center has extensive files on the history of the hospital)
Posted by Scott MingusDecember 4, 2018October 3, 2020 Army Hospital, Civil War people, Yankees, York

In early- and mid-May 1863, many newspapers in the divided North and South carried stories of the savage fighting at Chancellorsville, a significant Confederate victory over the poorly-led Union Army of the Potomac. As the month progressed, most of these same papers spread reports of the stunning death of one of the Confederate army’s most iconic figures, Thomas J. “Stonewall” Jackson. His own troops had nervously shot at Jackson and his party in the darkness at Chancellorsville, erroneously believing them to be advancing Union cavalrymen. Jackson’s personal surgeon, Dr. Hunter Maguire, had amputated his left arm but Jackson eventually succumbed at Guinea Station to pneumonia and weakness.

Tens of thousands of other soldiers, both blue and gray, had fallen at Chancellorsville in what was regarded as one of Robert E. Lee’s most daring and successful battles. Railroad cars had carried some of the wounded Federals north into Maryland and Pennsylvania for treatment, including at the 1,000-bed U. S. Army General Hospital on Penn Common on the south side of York, Pennsylvania. There, Dr. Henry Palmer and his staff of surgeons and stewards provided competent care for the recent arrivals. The new patients blended in with the existing populace of convalescents in what came to be regarded as one of the most efficient military hospitals in the country.

Relief groups and compassionate individuals throughout the Union often sent boxes of supplies, food, books, hometown papers, letters, Bibles, and other useful materials to the sprawling York hospital. The task of sending letters of gratitude usually fell to the medical facility’s well-regarded chaplain, the Rev. James A. Brown. A native of Lancaster County, PA, Brown was the president of Newberry Lutheran College and Seminary in South Carolina when the Palmetto State seceded. He and his family soon returned to the North and, for a while, Brown was the chaplain of the 87th Pennsylvania before joining the hospital’s staff.

Toward the end of May, the Ladies’ Relief Association of Gettysburg dispatched a box of comfort supplies to the York hospital. Little did anyone know at the time that Gettysburg, the quiet but prosperous seat of Adams County some 30 miles west of York, would by the end of the first week of July be receiving wagon loads of relief supplies from York County. More than 1,000 wounded men would arrive in York via rail after falling at the battle of Gettysburg.

That was in the future, however. For now, in late May, it was the Reverend Brown’s duty to send his thanks for relief supplies to Gettysburg. He did so on June 1. Here is his brief letter, as first recorded in the June 9, 1863, edition of The Adams Sentinel.

Transcribed Article from the Adams Sentinel and General Advertiser

The Ladies Relief Association of Gettysburg, a week or ten days ago, sent a box of delicacies to the sick and wounded soldiers in the York Hospital, which has been gladly received, and politely acknowledged by the Chaplain, as follows:

Dear madam — Your letter has just come to hand. The box came on Friday. Some of the articles have already gladdened the hearts of the Soldiers in the Hospital. I design yet, to-day, to make a special application of some of the good things to several men from Gettysburg. Your kindness is duly appreciated, and I will endeavor to see that it reaches needy and deserving objects.

Please present our thanks to the donors.

With Christian regard, I am your’s,

Blogger’s note: A lengthy article I wrote on the U. S. Army General Hospital in York will be appear in the January 2019 issue of Gettysburg Magazine. Watch for it at leading bookstores in Gettysburg or at the popular Civil War and More bookstore in Mechanicsburg, Pa.!