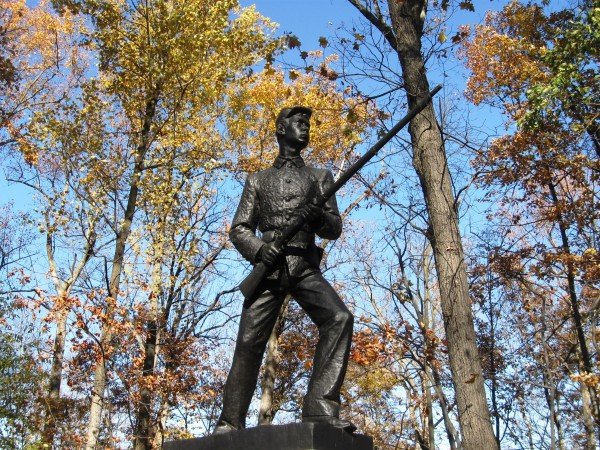 The Gettysburg National Military Park has announced its 2013 schedule of winter lectures and PowerPoint presentations. As usual, this promises to be a fascinating blend of talks not only on the 1863 Battle of Gettysburg, but also on other Civil War topics of general interest. All events are free and the public is welcome and encourage to attend.

Each talk will begin at 1:30 on the date scheduled and will be held inside the GNMP Visitors Center. Programs will be held in theaters January 5 – February 24, and in the Ford Education Center, March 2 – 10. Schedule is subject to change.

The Siege of Vicksburg took place for 47 days as the control of the Mississippi River hung in the balance. Come join us as we explore assaults, siege warfare, mining operations, naval actions, and yes, rats.

Three problems plagued the Confederacy as 1863 opened, and drove its strategic considerations. These were: the continuing limitations of terrain; the growing economic turmoil, and the completely dysfunctional command structure of the Western Department. These three aspects combined to contribute to the army options and inevitably to the downfall of the Confederacy.

Saturday, January 12 Despair, Defeat, Redemption & Determination: The Army of the Potomac in 1863 with D. Scott Hartwig

1863 proved a stern tested of the Army of the Potomac’s resiliency. It emerged from Fredericksburg and the subsequent “mud march” disgusted, angry, and demoralized. Joe Hooker rebuilt the army and restored its pride and discipline then led it to defeat at Chancellorsville. But the army shook this disaster off, soldiered on, and recovered to find its redemption at Gettysburg, its greatest victory. Great as Gettysburg was, a hard, grim road lay ahead of the army. It spent the fall sparring with the enemy and readying itself for the death grapple that would come in the spring.

Saturday, January 19 If These Things Could Talk” with Tom Holbrook

Original objects from the park’s museum collection are examined for the larger stories they tell about the Battle of Gettysburg.

Sunday, January 20 “On Campaign with Fighting Joe” – Joseph Hooker and the Army of the Potomac in 1863 with Chris Gwinn

For five critical months Maj. Gen. Joseph Hooker commanded the Union Army of the Potomac, taking it from the brink of collapse to the height of its power. From the crossroads of Chancellorsville to the eve of Gettysburg, follow this misunderstood and enigmatic general and explore his triumphs and disasters through the eyes of the men he commanded.

Sources on the battle of Gettysburg abound, but it is the cultural meaning of words, in those sources, that add another layer of understanding. A closer analysis of the descriptive language associated with the town and battle uncovers a rich texture of cultural meaning below the surface.

Sunday, January 27 We are having a grand time right now!” The Army of Northern Virginia in 1863 with John Heiser

Not quite a year after its organization, the Army of Northern Virginia had emerged as the premier fighting force in the Confederate States Army. There was no other army like it; this army marched farther and faster than any army before, accomplished victories despite inadequate supplies, and managed to outwit and outmaneuver a larger and better equipped army. What was it about this one Rebel army that gave its commander and those who witnessed it such confidence as it marched into the North in the summer of 1863?

Saturday, February 2 The Bloodless Campaigns in Tennessee with Bert Barnett

Following the Union army’s victory at the Battle of Stone’s River both sides prepared to renew the struggle for control of Tennessee in the spring of 1863. What followed was a campaign of maneuver between the armies of Braxton Bragg and William Rosecrans that resulted in no major battles, yet ended with Rosecrans’ army in almost complete possession of the theater and its vital rail center of Chattanooga. Maneuver, abetted by a cohesive command structure, had carried the day, not fighting. Rosecrans’ success posed a direct threat to the heart of the Confederacy that it reacted to vigorously.

Having been pushed out of Chattanooga, TN by the Union Army of the Cumberland in early September, Braxton Bragg’s Army of Tennessee, reinforced by two divisions of James Longstreet’s corps from the Army of Northern Virginia, mounted an offensive to retake the city. It resulted in a two day battle on September 19-20, 1863 along Chickamauga Creek, that was the bloodiest battle in the western theater during the war and the only victory for Bragg’s Army of Tennessee.

Sunday, February 10 “We Shall be Wiped Out of Existence” – From Calamity to Crisis: Oliver O. Howard, Out of Chancellorsville and into Gettysburg- with Chuck Teague

One of the great debacles of the Civil War occurred at Chancellorsville, when Major General Oliver O. Howard’s 11th Corps was struck with such devastation by the Rebels he felt he “wanted to die.” It would not be long afterwards he would find himself on another battlefield where he said he thought he indeed would die when facing overwhelming enemy forces again. We will ponder what he expected, what he intended, and what he did, including lessons learned coming out of Chancellorsville and into Gettysburg.

Following his pivotal role in the Confederate victory at Chickamauga, in September 1863, General James Longstreet was sent north with 12,000 men into East Tennessee to contend with a Union force commanded by General Ambrose Burnside, with both sides vying for control of this critical region and especially the city of Knoxville. The campaign that followed, undertaken in the most wretched of conditions, witnessed Longstreet and his men utterly defeated while Burnside and his soldiers emerged triumphant, securing Knoxville and East Tennessee firmly for the Union. Learn more about this long overshadowed but critically important campaign with all its attendant battles.

Sunday, February 17 With Porter on the Mississippi – Union Naval Operations in the Vicksburg Campaign with Karlton Smith

Although Ulysses S. Grant deserves high praise for the success of the Vicksburg Campaign, it is often forgotten that the U.S. Navy played a critical role in helping him capture Vicksburg, and that to be successful Grant needed to forge a relationship and work closely with Admiral David Dixon Porter, the naval commander. Porter and Grant formed a winning combination that led to one of the Union’s greatest successes of the war.

The Chancellorsville Campaign began with great promise on April 30, 1863 for Joe Hooker and the Army of the Potomac. Six days later, after the bloodiest fighting yet seen in the war, Hooker and his army were in retreat and Robert E. Lee and his Army of Northern Virginia had achieved Lee’s most remarkable victory.

Sunday, February 24 Gettysburg Redeemed: Bristoe Station, Mine Run, and the Fall Campaigns of 1863 with Dan Welch

For Robert E. Lee, Gettysburg marked the end of a string of strategic and tactical victories with a bloody and discouraging defeat. And when General George G. Meade and his Army of the Potomac failed to destroy the Rebel army during its retreat, its tactical success at Gettysburg lost much of its luster. Both commanding generals tendered their resignations. Both were rejected. Would either of these generals find redemption in the coming fall campaigning?

Saturday, March 2 – Second Battle of Winchester – “The Thermopylae of my Campaign” with Matt Atkinson.

Nestled behind Cemetery Ridge in 1863 was an unassuming white farm house owned by Lydia Leister. Within this one room structure, decisions were made that determined the fates of armies and men, and information became the crux on which those decisions were made. However, controversy would soon follow and questions arose debating their soundness. What happened within those four walls, and how did it affect the men upon whose shoulders those burdens fell?

The story of Pickett’s Charge is so steeped in mythology that a logical rendering of what happened on July 3, 1863 is difficult to comprehend. This lecture will engage in the tricky task of separating symbolic truth from real time events; of demystifying and de-fanging the allegorical other-world of high water mark in favor of rational revelation.

Sunday, March 10 (Ford Education Center) The greatest amount of human suffering known to this nation since its birth: The Fields of Gettysburg Through the Eyes of Battlefield Surgeons with Barbara Sanders.

The third and final installment of the story of the medical corps in the Civil War, this lecture will explore the improved system of transport, supply and treatment as established by the time of the Gettysburg campaign and battle, and will look at the fields on the evenings of June 30, July 1,2,3 and 4 from the perspective of a Union Army surgeon – Barbara Sanders

Jim Schmick at the Civil War and More Bookstore is sponsoring a FREE contest with a chance to win a $50 store gift card! Huzzah!