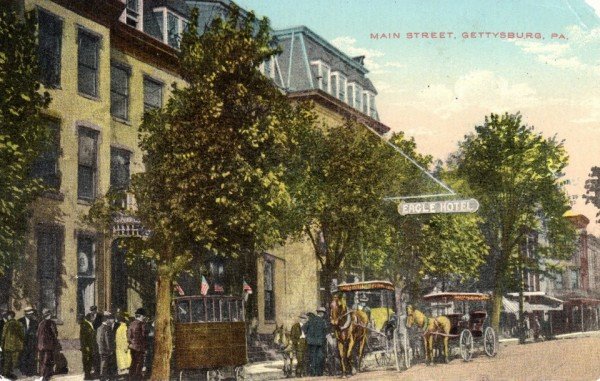 Today in the town of Gettysburg, a 7-11 convenience store and its parking lot occupies the northeast corner of the intersection of Chambersburg Street (US Route 30) and Washington Street. Back in the 19th century, however, this was the location of one of Gettysburg’s leading attractions, the Eagle Hotel.

A historical marker in the current parking lot recounts a little of the venerable hotel’s long history.

“From 1834 to 1960 this site was occupied by the Eagle Hotel building. It was Gettysburg’s premier hostelry for most of the 19th century. The advent of automobile and cheaper motels were the source of its downfall midway in the 20th century.

It was always the soldier’s favorite. When his cavalry division arrived in Gettysburg on June 30, 1863, General John Buford placed his headquarters at the Eagle Hotel until the battle opened the following morning. For years following the war it was the hotel of choice for Union veterans returning for reunions.

During the retreat of Union forces through the town to Cemetery Hill the intersection here in front of the Eagle was the scene of considerable confusion and brief fighting between pursued and pursuers. While they occupied the town the Confederates ransacked the hotel’s liquor and food supply but did no harm to the building.”

Before the Battle of Gettysburg, the Eagle Hotel was the personal headquarters of Maj. Granville Owen Haller of the 7th U.S. Infantry. Haller was a native of York, Pa., who had considerable experience as an Indian fighter in the Pacific Northwest. He had commanded the headquarters guard for Maj. Gen. George B. McClellan in the Maryland Campaign and at the Battle of Antietam. He had contracted a disease while in the field and had returned to York to recuperate. When the Rebels threatened Pennsylvania in June 1863, he took the Northern Central Railway from York to Harrisburg and volunteered his services to the commander of the Department of the Susquehanna, Maj. Gen. Darius N. Couch.

Couch instructed Major Haller to raise militia troops in Adams and York counties and then to defend the region against any Confederate raiding parties. Haller made his HQ in the Eagle Hotel, which had been newly renovated. From his room, he directed the movements of two volunteer cavalry companies which scouted many of the roads emanating from Gettysburg for any signs of oncoming Rebel forces.He and his officers likely stabled their horses in the Ziegler and Holtzworth Livery located behind the hotel.

On June 26th, the Confederates arrived in mass from the west on the Chambersburg-Gettysburg Pike. Haller beat a hasty retreat on his horse to Hanover, Pa., leaving the newly arrived 26th Pennsylvania Volunteer Militia, an emergency regiment with scarcely three days of training, to fend for itself. His actions would spark a war of words with the colonel commanding the militia.

During the Battle of Gettysburg a few days later, the Eagle Hotel was behind Confederate lines for the last two days of serious fighting. For decades after the battle, returning veterans often would book rooms in the hotel. In July 1893, the guests included the commissioners of the Gettysburg Battlefield Memorial Association, among them generals Daniel Sickles, Henry Slocum, and Joseph Carr, all of whom fought at Gettysburg. A year later, the original hotel burned down, but was soon rebuilt.

The second hotel, which operated under various names, was razed in 1960.