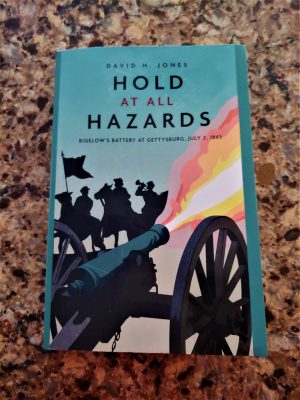 The Trostle Farm at Gettysburg is a popular and well-known spot on the Gettysburg National Military Park. Its now iconic barn features a hole from an artillery round that smashed through the bricks during the fighting of July 2, 1863. A wayside marker along the park road in front of the house includes a famous photograph showing many dead artillery horses lying in the farmyard. Licensed Battlefield Guides explain the background story of Capt. John Bigelow’s 9th Massachusetts Artillery, a relatively inexperienced battery (combat-wise) that had been recently added to the United States Army of the Potomac after being stationed for months in Fort Ramsay guarding the approaches to Washington, DC.

Hastily added to the army, the Bay Staters marched north into Pennsylvania, where they took position along the Wheatfield Road after being called up from the Reserve Artillery park. Under heavy enemy pressure, they “retired by prolonge” (a military technique of hauling cannons rearward using tow ropes and pausing occasionally to fire) to the Abraham Trostle farm. There, they held “at all hazards” to buy time for a fresh US line to form on Cemetery Ridge. Bugler Charles W. Reed, a noted sketch artist of army life, rescued a critically wounded Captain Bigelow, a gallant feat that later resulted in a Medal of Honor being awarded to Reed. 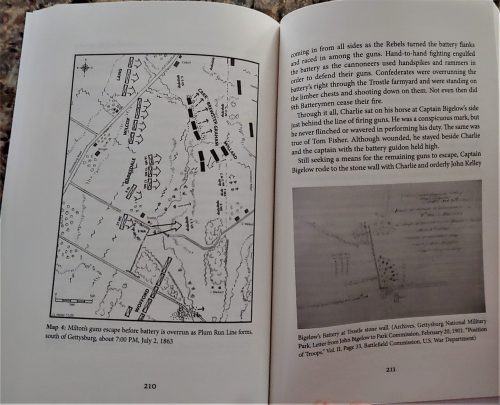 Novelist David H. Jones has written a new book about the 9th Massachusetts and its combat at Gettysburg.  Appropriately titled “Hold at All Hazards: Bigelow’s Battery at Gettysburg, July 2, 1863,” the historical fiction is well done, with believable dialogue and characters based on the actual participants in the artillery battery. Based upon written memoirs, letters, and battery records, the settings and situations that Reed and Bigelow find themselves in, and the soldiers and family members with whom they interact, are credibly recreated, with the added touch of a talented novelist’s imagination.

The novel begins with the 9th Massachusetts chafing under a foreign-born captain who appears more interested in self-indulgence and interacting with Washington’s society than in drilling his men and making them proficient in the art of warfare. When protests reach the War Department and the governor of Massachusetts, the army relieves the erring captain and replaces him with Bigelow. His steady drilling and insistent on adherence to military protocol at first brings resentment, especially to Bugler Reed and his comrades. However, over time, the artillerymen begin to realize that they are becoming far more proficient under the training, resulting in an improved morale and sense of pride in the battery.

Jones, while focusing on Bigelow, Reed, and their comrades, interweaves side stories of farmers Abraham and Catherine Trostle; Confederate Generals Robert E. Lee, James Longstreet, and William Barksdale; US Generals George Meade and Daniel Sickles; and others to add background depth and context to his story line of the embattled Massachusetts artillerists.

The book is an easy read. Over a leisurely three-hour stretch, I found myself drawn into the dialogue, despite knowing the historical outcome of the 9th Massachusetts’s journey into history at Gettysburg. I only had a few scattered historical nits, such as using the term White House instead of the more common Executive Mansion for Lincoln’s home, but these were quite minor and did not detract from the tale that Jones colorfully weaves. The author clearly did his homework on the battery’s morale, training regimen, daily routine, journey to the Keystone State, and their now-storied defense at Gettysburg. The Bay Staters truly did “hold at all hazards,” and Jones’s new book is a worthy legacy of their valor in the face of overwhelming odds against a seasoned and determined foe.

Hold at All Hazards: Bigelow’s Battery at Gettysburg, July 2, 1863, by David H. Jones checks in at 262 pages, including acknowledgements, bibliography, and multiple appendices. Casemate published the book in the late summer of 2021. For those Cannonball readers wishing to purchase a copy, the ISBN number is 978-1-63624-060-2 for the paperback edition (with an MSRP of $22.95 in the US). 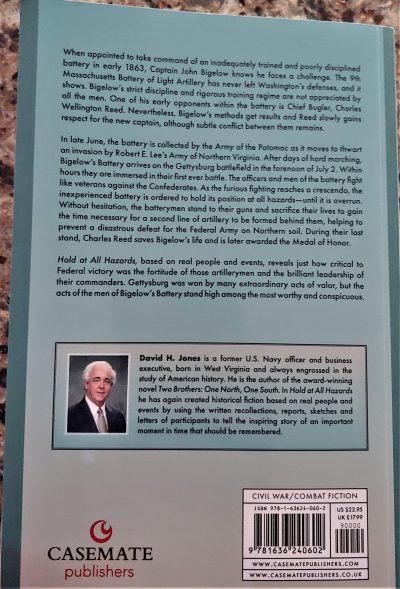