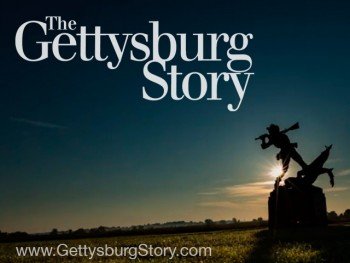 Lancaster Civil War Round Table welcomes acclaimed documentary filmmaker Jake Boritt who will deliver a special presentation at Lititz Public Library on Thursday August 15 at 7:00 p.m. Boritt will be discussing his film ‘The Gettysburg Story’ which will air on PBS stations this November in commemoration of the 150th anniversary of the famed Gettysburg Address. He will be speaking about the challenges of bringing history to life via film and the power of new cinematic technology, showing the new film in the process.

‘The Gettysburg Story’ film dramatically tells the history of the greatest battle fought in the Western Hemisphere. Narrated by actor Stephen Lang (known for films Avatar and Gettysburg) and directed by Jake Boritt, the stories of characters who experienced the battle come alive through dynamic, innovative imagery that captures the historic battleground as you have never seen it before.

Over the last 150 years, the Battle of Gettysburg has become the stuff of legend, told and retold using contemporary technologies of each generation: from glass plate negatives to woodcut prints, black and white silent films, bestselling novels and TV miniseries.

The film captures Gettysburg – a unique, timeless American place – in a new way. Through years of preparation and close cooperation with the National Park Service, the film crew was granted unprecedented access to the 6,000-acre battlefield. And the latest imaging and editing technologies allow the presentation and reinterpretation of the timeless Civil War narrative, capturing the iconic landscape of the town and battlefield, for a new generation of viewers.

The presentation, which is free and open to the public, is sponsored by the Lancaster Civil War Round Table. For more information, email lancastercivilwarroundtable@gmail.com or call Micky at 717-397-4976.