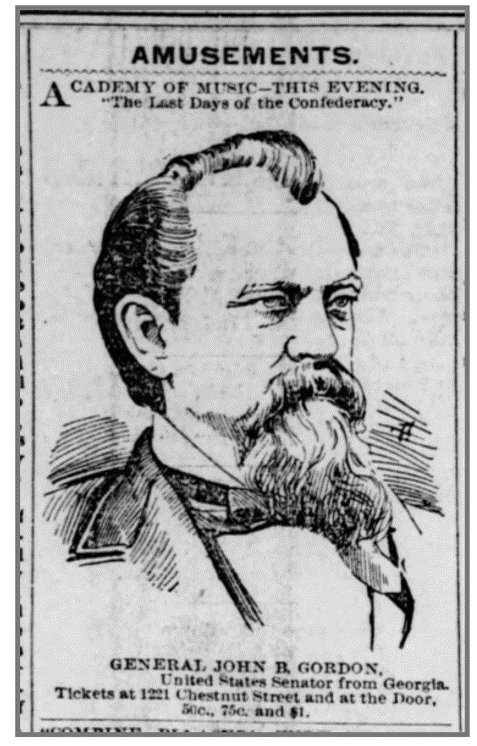 Tens of thousands of soldiers, both those wearing blue and those wearing gray and butternut, tramped or rode through York County during the Gettysburg Campaign. Some were prominent in civilian life, although the majority were “common folks” who would disappear from the stage of history once their military service was over. Jubal Early’s Confederate division, J.E.B Stuart’s and Judson Kilpatrick’s opposing cavalry, scores of Union infantry regiments in southwestern York County en route to Gettysburg, state militia, crews and officers from the U.S. Military Railroad, medical personnel – all spent at least some time in this area.

For some of these soldiers, the march through York County would lead them to death or injury at Gettysburg or on future battlefields. For others, it would be another step in life’s journey that would lead them to post-war obscurity or fame and public awareness. A few of the men who traversed York County would go on to political fame, including holding their respective states’ highest office.

Brigadier General John B. Gordon led a force of more than 2,000 men who marched across York County from Abbottstown to Wrightsville before returning to Adams County. He served as a U.S. Senator from 1873 to 1880 and was the Democratic Governor of Georgia from 1886 to 1890. Some historians believe he served as the Grand Dragon of the state’s Ku Klux Klan in the early years of Reconstruction, although the issue has never fully been resolved.

Colonel James Milton Smith commanded the 13th Georgia Infantry in Gordon’s Brigade. Not long after the Gettysburg Campaign, Smith was elected to the Second Confederate Congress and resigned his commission. After the war, he serrved in Georgia’s House of Representatives. A staunch opponent of President Grant’s Reconstruction policies, Smith governed Georgia from 1872-77, being acknowledged for retiring the state’s debt. After an unsuccessful run for the U.S. Senate, the Democrat served on the state’s Railroad Commission for six years.

Colonel Russell Alger fought at the Battle of Hanover as the leader of the 5th Michigan Cavalry in George Armstrong Custer’s brigade. The Republican’s impressive post-war resume included stints as the Governor of Michigan from 1885-87, a U.S. Senator in the 59th Congress, and the Secretary of War in the administration of President William McKinley. He also served in the Michigan state legislature.

Brigadier General Wade Hampton III was also present at the Battle of Hanover. His brigade brought up Stuart’s rear guard during much of the wearisome nighttime ride northward from Hanover to Dover. He later camped near Dillsburg on a fruit farm. He governed South Carolina from 1877-79 before resigning to become a prominent senator for the next twelve years. He later served on the United States Railroad Commission.

Brigadier General Fitzhugh Lee, another of J.E.B. Stuart’s brigade commanders at the Battle of Hanover, became the Governor of Virginia in 1880. He was later a diplomat to Cuba. During the Spanish-American War, Lee was one of a handful of former Confederate generals who served as generals in the U.S. Army in that conflict.

Not all the future governors were prominent officers during their brief sojourn in York County. Teenaged Private Samuel W. Pennypacker was a member of the 26th Pennsylvania Volunteer Militia, which briefly formed a battle line to defend Dillsburg against Confederate mounted infantry. As the Governor of Pennsylvania from 1903 until 1907, he was noted for creating the Pennsylvania State Police department, and he oversaw the construction of today’s State Capitol building.

In future blog entries, we will briefly look at some other soldiers in the Gettysburg Campaign who later served as state governors or held other prominent political offices..