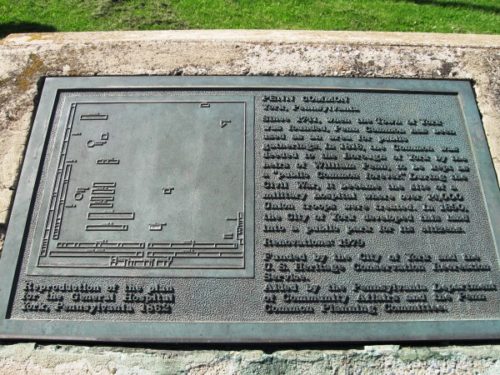 From the hills of western PA to graves in York

York’s Penn Common was the site of a major U.S. Army Hospital, where more than 14,000 sick, injured and wounded Federal soldiers passed through its wards. Most of the patients eventually recovered and either went home with medical discharges or rejoined their regiments. However, for scores of men, the white walls and ceilings of the hospital rooms would be the last things they would see on Earth. A scouring of regimental histories, letters, diaries, journals, and other contemporary accounts occasionally gives brief glimpses into the lives (and deaths) of these young men.

In November and December 1862, the 148th Pennsylvania Infantry was camped in Cockeysville, Maryland, before marching off to join the Army of the Potomac. The regimental historian later recalled, “The sick, five in number, were sent to the hospital in York, Pennsylvania, one of whom died there; three were discharged [from the army] and but one rejoined the company.”

George Roland was a farmer from South Bend, Pennsylvania. His military records indicate he had brown eyes and black hair. He was only 24 at the time of his death.

A couple of other ill soldiers from this regiment would also die in York:

Illness claimed far more lives in the Civil War than bullets, and these western Pennsylvania men were just three of the hundreds of thousands of soldiers who would perish from sickness. A few of them remain buried in the sprawling cemetery along North George Street.