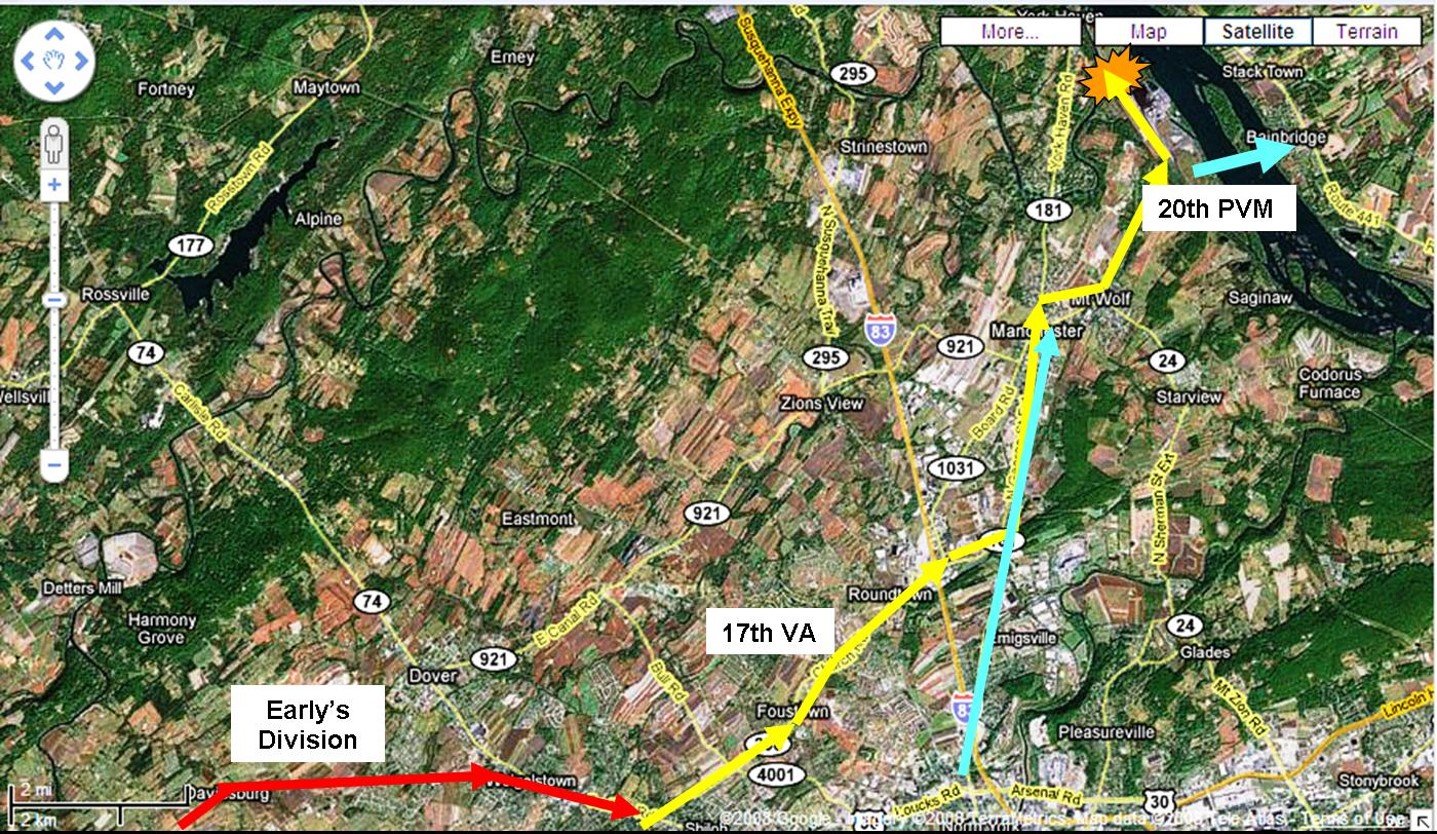 Background posts: Fire on the Conewago!; More on the York Haven bridges.

On June 28, 1863, Confederate cavalry from the mountains of West Virginia conducted a daring raid in unfamiliar enemy territory to destroy a pair of the Northern Central Railway’s wooden railroad bridges over the Conewago Creek just south of York Haven in northeastern York County, Pennsylvania. The map shows the likely route, pieced together from surviving Confederate and civilian accounts, as well as from studying the postwar damage claims filed with the court system. These sworn testimonies were from farmers and residents who were trying to recoup their losses in horses and property taken by the Rebels.

At Weigelstown (at the intersection of Davidsburg Road and Carlisle Road (today’s S.R. 74), Major General Jubal A. Early ordered Colonel William H. French, an antebellum personal friend, to take his cavalry up to York Haven and burn the twin bridges over the Conewago Creek. From records of damage claims in Harrisburg, the modern researcher may retrace the most likely route Colonel French and his mounted Rebels took. Local records indicate the Virginians accosted a farmer named Benjamin Miller and forced him to serve as a guide to York Haven.
The main body appears to have followed Carlisle Road southward to the intersection with Church Road, where it turned eastward. Patrols went everywhere, raiding farms for horses along the route. One detachment headed across Stillmeadow Lane to the Susquehanna Trail and turned northward there.

The various squadrons reunited at Manchester (then called Liverpool) and Mount Wolf, where they paused to buy shoes and merchandise from local stores and stealing horses along the way. Some soldiers bragged to townspeople that they were heading for Philadelphia before going on to New York. One party of Virginians ransacked George H. Wolf’s store and cut down nearby telegraph poles. Another group stole four mules, two horses, a colt, harnesses, and halters from Samuel Rutter’s Manchester Township farm.

About noon, the cavalrymen used coal oil to burn two railroad bridges over Conewago Creek after a 400-man guard detachment from Colonel William Thomas’s 20th Pennsylvania Volunteer Militia “skedaddled” across the Susquehanna River in rowboats to Bainbridge in Lancaster County. The Virginians fired at the last boatload of Yankees, but failed to hit anyone. They headed back to York and placed powder charges on the Black Bridge, destroying it. Early ordered French to head south to destroy the bridges and trestles near Hanover Junction that Elijah White had skipped over the day before.