First JEB Stuart strikes; then a triple murder near Round Top: Part 5 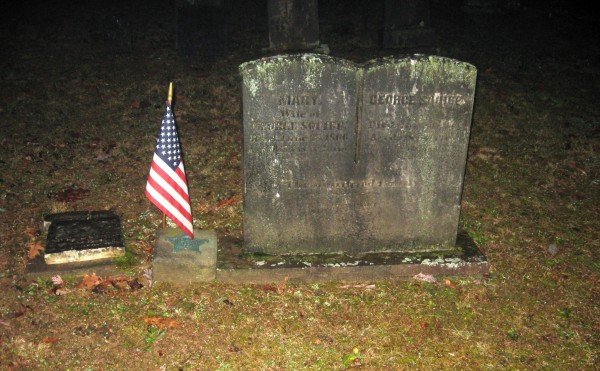 Sarah Emma Seifert, Mary (Bell) Squibb, and George Squibb lie side by side in the cemetery of Warrington Friends Meeting House. They are known in local history as “The Murdered Family.” But who killed them? (Photo by Scott Mingus, 12/6/14).

William “Irish Bill” Donovan was incarcerated in downtown York. Itinerant beggars Charles Wilkins and Martha Ann Pontel were being held in the Lancaster prison. Yet suspicions lingered that perhaps there was someone else. Both Donovan and Wilkins had proclaimed their innocence; at least there was some circumstantial evidence against Irish Bill. Wilkins was being held only on the word of the beggar woman.

Anxious to collect the $300 reward offered by the York County commissioners, several locals still kept an eye for any suspicious characters roaming the region and kept their ears open at the inns and taverns in case someone under the influence began bragging or talking too much about the slaughter.

By early July, at least ten different men had been arrested and interrogated.  Most were vagrants or travelers passing through the county who were held until they could produce a viable explanation of their reasons for being in the area. By late in the month, only four people (including Irish Bill) were still in custody awaiting the convening of the August session of the York County Court. Martha Ann Pontel and Charles Wilkins had been sent to the York jail, but she was eventually released; her name disappeared from the historical record, and it presumed she resumed her begging.

Public opinion was sharply divided on the issue as to the true killer.

And then yet another new set of suspects appeared on the scene. 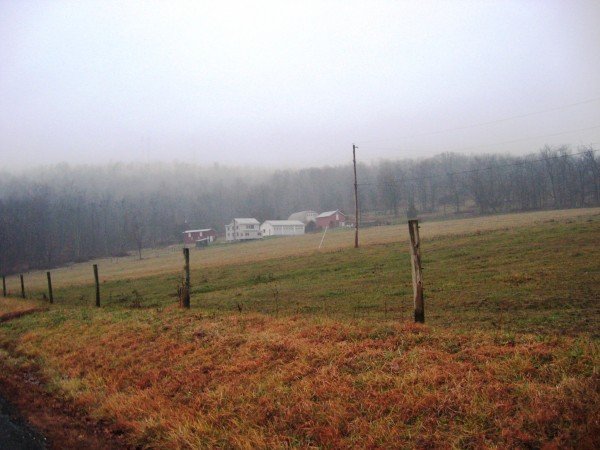 George and Mary Squibb and their granddaughter were murdered on this remote farm back in 1866. None of the original buildings are left.

Rumors had circulated from the beginning about a man which Irish Bill had brought with him from Harrisburg on the day before the killing. On July 24, 1866, authorities in the capital city interviewed one John McGranigan, like Donovan of Gaelic extraction. He had had confessed that he had killed three people and he expected to be executed for his crime.  Hence, he was arrested and and taken down to York to be incarcerated in the same jail as the other four alleged murderers. It was said that he had much earlier made a similar admission, dating from the day of the murders, and McGranigan’s possible role in the sordid event became a parlor topic.

In August, Judge Robert J. Fisher convened a grand jury. Fisher was well known in the York area, having firmly negotiated with invading Confederate Major General Jubal A. Early back in June 1863 when the Rebel commander threatened to burn the courthouse records. He was considered intelligent, firm, and fair in his judicial dealings. After hearing the testimonies and reviewing the evidence, the grand jury found sufficient reason to issue true bills (a form of indictment) against McGranigan, Donovan, and two other men, Edward Boyle and his father John Boyle. Charles Wilkins was never indicted despite Pontel’s earlier statements to the police and to the Lancaster Intelligencer reported. He too, disappeared from the record.

The Boyles were early suspects but had avoided arrest for several weeks. According to news accounts, he tried to implicate others and told the sheriff frequently to arrest the Boyles. He also told the jailor, when the Boyles were finally brought into prison, that they had the right parties now.

Donovan was the first of the quartet of suspects to face a jury trial. Three local lawyers, Pere L. Wickes, James B. Zeigler, and Silas H. Forry, were to represent his interests. Wickes was the lead attorney. Raised in Baltimore, he had been educated at Princeton and was considered as an up-and-coming legal star. He had been admitted to the bar of York County in 1859. In fact, Wickes in the years to come would succeed Fisher as the county judge upon the latter’s retirement. No one seems to have questioned that Wickes as  lead defense attorney was a nephew of Judge Fisher. 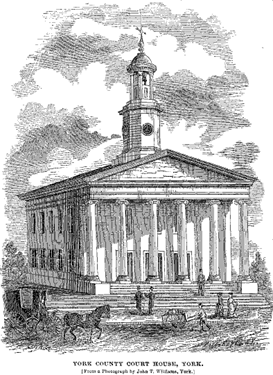 The trial of William “Irish Bill” Donovan was held in the York County Courthouse, shown here in this antebellum sketch.

Donovan’s trial lasted for ten full days. It attracted large crowds every day, reflecting the intense interest taken in the case. Spectators varied in their opinions, but the majority thought that yes indeed, he was one of the killers. When the court clerk read the guilty verdict, Donovan did not flinch. Upon receiving the death penalty, according to a reporter, “he received his sentence with perfect coolness. There was not the slightest change upon his countenance and not a word escaped his lips.” His team of attorneys filed a motion for a new trial, to which Judge Fisher deferred until the other prisoners could be tried. Donovan went back to his cell, the death penalty hanging over him.

In the 1860 U.S. Census of Warrington Township, Donovan (whose name in various accounts is spelled as Donavin, Donavan, and Donovin) was listed as 31 years old, a day laborer worth $300 and Ireland as the birthplace of both he and his wife Ann (also 31). They had two children, William Donovan Jr. and Ellen; both were still under the age of ten as their father was convicted in a court of law by his peers for the brutal murders of the Squibb family.

He continued to protest his innocence. Some observers believed him, thinking him harmless other than his penchant for strong language and even stronger drink.

However, on the evening of his conviction, as he was walking from the Courthouse to the prison, Donovan remarked to the deputy sheriff that “if they would put him on the stand he would let the whole thing out.” He continued to blame the Boyles as the true killers.

Now the county’s attention turned to ferreting out whether his fellow Irishman John McGranigan or the father-son team of John and Edward Boyle were equally guilty.

To be continued in Part 6…