First JEB Stuart strikes; then a triple murder near Round Top: Part 4 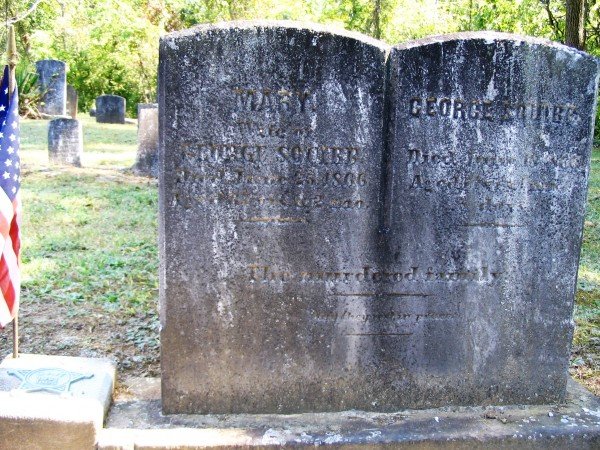 The weathered gravestone of Mary (Bell) and George S. Squibb is shown in this  photograph courtesy of York Countian Jeremy Easton. It is in the southwestern section of the cemetery of the Warrington Friends Meeting House along PA Route 74 near Wellsville, Pa. Note the inscription “The Murdered Family,” which is how the Squibbs unfortunately came to be known.

As news spread throughout the region of the shockingly brutal assaults on George and Mary Squibb and their young granddaughter, residents began casting wary eyes on every stranger which passed through York County, and especially on those bent on crossing the Susquehanna River into Lancaster County or to Harrisburg. While one suspect, William “Irish Bill” Donovan, was safely behind bars, many people believed he could not have committed the hideous crimes without assistance. Mary Squibb had, after all, indicated that two persons were involved in the crime.

The commissioners of York County offered a reward of $300 for the arrest of the murderer or murderers. They soon had plenty of candidates, including a pair of traveling beggars who were arrested in the village of Manheim in Lancaster County on Wednesday afternoon, June 2o, 1866, and interrogated about the slayings.

Did the authorities now have all of the killers in custody?

If so, the community could rest easier knowing they were off the street.

The suspects were quite an odd couple. The man was Charles Wilkins (or Wilkes in several accounts), a 28-year-old immigrant from the Kingdom of Hanover in what is today northern Germany. He at times had used the alias Henry Myers. His traveling companion was a 51-year-old woman born four miles from Chambersburg, Pennsylvania, by the name of Martha Ann Pontel (Mary Ann Pontell in some  newspaper accounts).

Wilkins had initially denied to the authorities in Manheim that he had ever been to Rosstown (now Rossville) or the region where the Squibbs lived.

However, a cooperative Pontel told a different tale.

She stated that the pair had left the county poor house in Carlisle together and had then had reached the Rosstown area on Saturday the 16th. She claimed she had indeed gone to the Squibb house and begged something to eat. She and Wilkins remained in the vicinity all night and well into Sunday. Wilkins insisted on going back to Squibb, but Pontel refused to go with him, saying that by the time they walked there all of the family would be in bed.

Martha Ann claimed that Wilkins then abused her, struck her, and dragged her along with him to the farm. Arriving about 8 p.m. Wilkins burst the door open and went in, lighting a candle on a nearby table. At that point, Pontel claimed, she ran away but stayed sufficiently nearby to hear screams. About 3:00 a.m. on Monday morning, Wilkins came to her. When she demanded to know what he was doing, he retorted that it was none of her business and violently struck her.

At daylight, Pontel noticed blood on his hands, shirt, and pants. He compelled her to wash the shirt and cut the bloody parts out of his pants and then patch them. For quite some time he persisted in not telling her how the blood came to be on his hands and clothing, but ultimately admitted that he had certainly killed the girl and thought the old man as well, but the old woman would get over her injuries. He had a knife which he said he had used and a hatchet he found in the house. Although Wilkins had no money when they left the Carlisle Poorhouse, Martha Ann saw that he now possessed a five-dollar bill.

The authorities readily believed Pontel. Despite her low standing in life, she had told her story consistently in a straight forward, convincing manner. Was Charles Wilkins the “desperate-looking” stranger who had been spotted on Monday morning traveling through Weigelstown? That would have been on the route described by the beggar woman.

Based upon her information, the officials escorted the couple to the Lancaster jail. 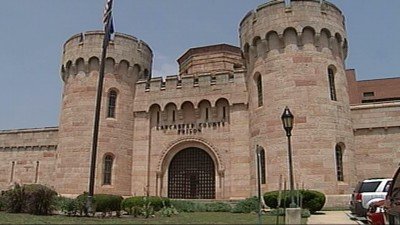 On Friday, June 22, a reporter for the Lancaster Intelligencer newspaper visited the beggar couple in the prison (shown above in this Wikipedia photograph). The first interview was with the immigrant Wilkins in his holding cell. After confirming his name, age, and birthplace, he recounted his travels since leaving the Carlisle Poorhouse with Martha Ann Pontel.

In his version, the couple had traveled south to York on Wednesday, June 13, stopping on their way at Dallastown. From York, they headed east across the river to Columbia, arriving on Friday. They continued their journey over the weekend to Manheim where they were arrested. He again denied having ever been to Rosstown.

However, when Martha Ann Pontel met with the newsman, she reiterated and expanded her story which she had previously told to the sheriff. Both she and Wilkins agreed they had left the poorhouse together and journeyed to York County, but she insisted that they had indeed visited the residence of the murder victims, near Rosstown, on Saturday and that she had begged for food. She added quite a few more details, mentioning that the old lady had given her some bread and meat, as well as a new ten-cent scrip with which to buy matches and tobacco.

Pontel told the reporter that she had went out and shared the food with Wilkins and they had then walked on together for some two miles before resting in a barn. While there, a man named John Baker came along and engaged Wilkins in conversation. Something did not seem right, so she urged Wilkins to travel farther. However, he refused, saying that Baker and he were “going to have some fun together.” Baker afterward left and Pontel did not see him again.

Because of the rain on Sunday, they did not leave the shelter of the barn until the evening when Wilkins insisted on returning to the Squibbs’ residence. She repeated the story of being beaten and forced to accompany the German on his errand, as well as all of the other particulars she had earlier told the authorities. She added that after arriving in Manheim on Wednesday, she went to a farmhouse a short distance from town on the Schaefertown Road and begged some meat, all the while under threat from Wilkins that he would kill her if she divulged the story of the killings.

Upon her return to him with the meat, she found Wilkins conversing with some black men to whom he had given his pants. As they told him the latest news on the murders over in York County, he turned quite pale. Martha Ann slipped behind Wilkins and using hand gestures indicated to the men that he was the one who had committed the murders.

After a while, Wilkins and Pontel had moved on to another farmhouse (the home of a farmer named Daniel F. Hamaker) where she begged some potatoes and half a loaf of bread. However, Wilkins became engaged in a heated argument with one of the hired hands. It gave her the opportunity to inform Hamaker that the man with whom she was traveling had committed the murders.

She borrowed a pot and went into the woods with Wilkins, where she washed the meat and pared the potatoes before cooking them. After lunch, the German immigrant fell sound asleep until about 4:00 p.m. when Daniel Hamaker and two other local men, Daniel Shreiner and George Kile, found the vagabond Wilkins lying alongside the road near Hamaker’s house. They arrested the couple and escorted them to David May, the Justice of the Peace, who interrogated them. Manheim constable Josiah Gipple escorted the prisoners down to Lancaster, where they were held at the county prison.

All the while, not knowing that Wilkins and Pontel had been arrested, in a jail in York County sat the alleged mastermind, Irish Bill Donovan.

Interestingly, Pontel at no time had mentioned him, or that he had anything at all to do the gruesome slaughter at the Squibb farm.

Could William Donovan actually be an innocent man?

Only time would tell.

To be continued in Part 5…