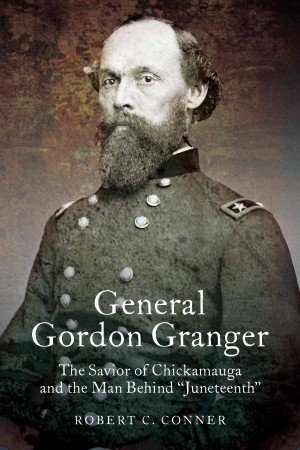 Civil War buffs familiar with the battle of Chickamauga likely are familiar with the name Gordon Granger. Commanding the Reserve Corps, on his own initiative and without orders, he moved his force to Snodgrass Hill to reinforce Maj. Gen. George “Pap” Thomas and his Fourteenth Corps. This helped solidify the position and buy time for the army to extricate itself from a possible debacle. Thomas gained great fame as “The Rock of Chickamauga” while Granger’s contributions faded from popular knowledge for the most part.

In fact, despite Granger’s repeated successes on the battlefield, his star never rose as high as some of his peers in the Western Theater such as John Schofield, James McPherson, and John Logan.  Part of that was his strong personality, which could be abrasive and self-centered at times. He was outspoken and quick to criticize others. These factors contributed to the War Department and General Grant passing over Granger when it came time for promotions to higher command. Postwar, Granger played a large role in Texas in starting the “Juneteenth” tradition during Reconstruction.

In the intervening nearly 150 years, Granger fell into relative obscurity. No one even bothered to write a full length biography of the general who performed well as a corps commander under some difficult circumstances. Now, author Robert C. Conner has corrected that oversight with his new biography, General Gordon Granger: The Savior of Chickamauga and the Man Behind “Juneteenth.”

Conner brilliantly uses a solid array of primary sources to paint a good portrait of this complex man, whose military acumen was overshadowed often by his personal shortcomings. He often got on the nerves of General Grant and other senior leaders, and at times tended to pay more attention to personal whims such as firing his artillery while he should have been tending to command details.

In this new book, we are introduced to a general whose self-assurance, boldness, and quick-thinking proved to be a major asset on the battlefield, but whose propensity to disregard cooperation with his peers kept him from army command when his martial performance rivaled men who rose to that position.

Conner divides his book into 11 chapters, effectively covering Granger’s Civil War career and postbellum actions. Granger was a “controversial, cantankerous Union general,” but his actions at Chickamauga may have saved the army.

The book is relatively short and concise, yet the author succinctly gives a comprehensive overview of Granger’s life and major activities. It’s an excellent and long overdue addition to the historiography of the Western Theater of the Civil War, as well as to the Reconstruction movement and the relations of the military with the freed slaves of the Old South and the Southwest.

General Gordon Granger: The Savior of Chickamauga and the Man Behind “Juneteenth”