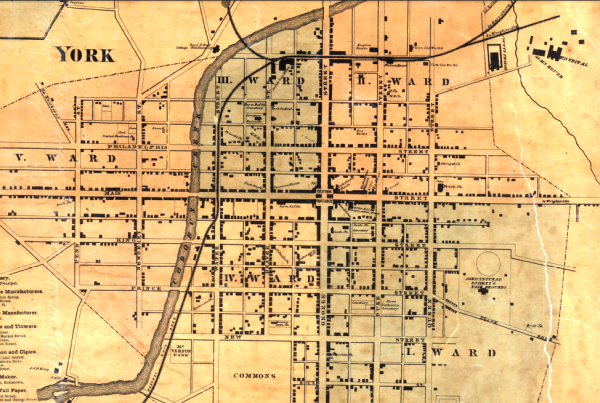 More than 700,000 soldiers died during the American Civil War, a staggering total given the relatively small population of the country as compared to WWII or to today. Far more men (exact numbers vary widely) were wounded, captured, or otherwise injured during their term of service. And, many injuries were likely never reported, especially those that occurred away from the battlefields.

In York, Pennsylvania, the presumed first casualty of the war had nothing to do with Confederates versus Union soldiers. It had to do with carelessness and being in the wrong place at the wrong time.

Here is the story, as taken from the April 23, 1861, issue of the York Gazette, the county’s highest-circulation newspaper during the Civil War.

The bombardment of Fort Sumter in the harbor of Charleston, South Carolina, and newly-inaugurated President Abraham Lincoln’s call for 75,000 troops to quell the rebellion led to many political and military demonstrations across the North and South.

In York, the editor of the Gazette, David Small, reported the town was filled with “intense excitement” at the recent events, “and the pervading topic of the community was, War! War! War! The telegraph office was beseiged by anxious crowds, while the daily papers and extras were seized upon with avidity by all classes.” Flags flew everywhere, all over town; “Nothing of the kind was ever seen in York before…” Small noted. The local milita units were called out and began drilling in preparation of joining the new volunteer Union army.

The Worth Infantry kept busy attending various flag raisings as more and more businesses and citizens displayed the colors. Seamstresses were busy fashioning even more. An imposing wooden flag pole, “nearly 100 feet high, and straight as an arrow,” now adorned the borough’s center square. As the home-grown soldiers practiced their craft and drilled in the Centre Square beneath the massive flag that flew over the town from this giant pole, not everything went as smoothly as planned.

“On Wednesday evening as the Worth Infantry were practicing the bayonet exercise in Centre Square,” the Gazette reported, “Mr. Edward L. Schroeder, one of the members of the company, was accidentally cut in the back part of his head by one of his comrades. He was taken to the office of Dr. Fisher, who rendered the necessary surgical aid.”

The 25-year-old Schroeder recovered quickly and went on to a star-crossed career as a Civil War soldier. The pre-war cabinetmaker from York borough enrolled on April 20 as a private in the 16th Pennsylvania Infantry, a three-month regiment. After his discharge on July 30, he enlisted in the 5th Maryland in Baltimore with the rank of sergeant-major. Promoted to second lieutenant in March 1862, he was so fed up with “the utterly demoralizing and degenerate condition of the regiment” that he tried to resign. Instead, he was given a promotion to 1st lieutenant in December 1862 and stayed with the 5th. Like so many others of the 5th Maryland (and many other York Countians in the 87th Pennsylvania), Lieutenant Schroeder was captured in the fiasco at Carter’s Woods during the Second Battle of Winchester in mid-June 1863. The Rebels incarcerated him in the infamous Libby Prison in Richmond. He spent time in three other prisons in Virginia, Georgia, and South Carolina before being paroled in Charleston on December 10, 1864. He returned to his regiment and was discharged honorably on January 28, 1865, when his term of enlistment expired.

After the war, Schroeder married Katie Laucks in Womelsdorf in Berks County July 1, 1878. He later returned to York and served as president of the local General John Sedgwick Post #37 of the Grand Army of the Republic (a leading Union veterans organization). On September 15, 1915, the old veteran collapsed in the street while marching in a G.A.R. parade in Washington, D.C., and died that evening. His body was brought back to York and buried in Prospect Hill Cemetery.

Edward Laucks Schroeder goes down in history as one of the first, if not the very first, casualties of the Civil War among York County soldiers.

Details from his service are from the Dennis Brandt Database of Civil War Soldiers, York County History Center.