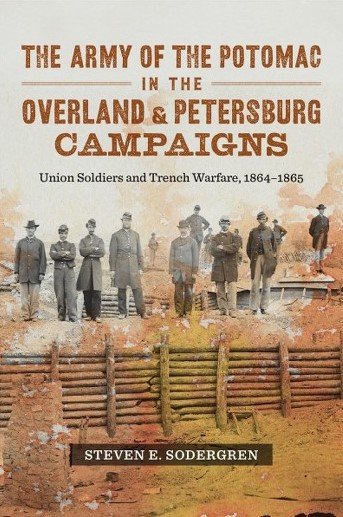 The 1864 Overland Campaign, and the subsequent Petersburg Campaign, changed the course of Civil War history. For much of the previous year and a half, Confederate General Robert E. Lee had been the aggressor, send his troops toward or into Pennsylvania in September 1862 (Maryland Campaign), October 1862 (Stuart’s First Raid of Pennsylvania), and June 1863 (Gettysburg Campaign). In the spring of 1864, it was the Yankees’ turn to take the offensive, a role that they largely would never relinquish.

Ulysses S. Grant had come to the east to take control of all the Union armies; he made defeating Lee’s Army of Northern Virginia a priority. He traveled with the Union Army of the Potomac, guiding and directing it through its titular head, Gettysburg victor George Meade, and slowly pushing Lee back from the Wilderness area near Fredericksburg south to Richmond and Petersburg in what became known as the Overland Campaign.

Many books, most notably by Gordon Rhea, have been written on the Overland Campaign and/or the Petersburg siege. Now, the talented Steven E. Sodergren has produced what is likely to become a new standard, examining the role of the Army of the Potomac in the trench warfare that developed over the summer and fall of 1864. It is an excellent study, one that deserves a place on the shelves of Civil War readers interested in the Grant vs. Lee maneuvering and battles.

Sodergren focuses his attention on the common Union soldier and his perspectives of the combat and the ensuing trench warfare that marked the beginning of the end of the opposing Army of Northern Virginia. In what some writers have deemed as a forerunner to World War I, the two armies faced off for months within range of one another. It could be dangerous work, as sharpshooters abounded, but often was tedious and monotonous. Many soldiers wrote home about their experiences. The author has examined hundreds of these first-person accounts and weaved their stories into a finely-crafted narrative that flows well and is quite enjoyable to read. What he reveals is that, unlike the common perspective that life in the trenches was miserable for both armies, that, at least on the Union side, many of the soldiers quickly adjusted to the situation and even thrived in it.

“Dig, dig, & keep digging,” one Yankee infantryman wrote concerning his daily routine. The hard work in constructing, then expanding, and finally improving the fortifications kept the men busy, interspersed with the occasional maneuvering to battle. Letters from home were a welcome respite, but as 1864 progressed into winter, it became evident that Lee’s days of threatening the home front were over permanently and it was only a matter of time, numerical superiority, and better supply lines until the Confederacy fell. Sodergren uses a representative sampling of these letters well in painting the word picture of the morale, attitudes, hopes, fears, and occasional frustration of the average Federal soldier in the Overland and Petersburg campaigns.

“Absolutely outstanding,” is how noted Civil War scholar Ethan S. Rafuse has deemed Sodergren’s new work. “Groundbreaking,” Gordon Rhea had written. “Splendid,” is the pertinent description from Pulitzer Prize finalist Brian Matthew Jordan. All are quite correct; this indeed is a compelling book and a welcome addition to the historiography of the last full year of the Civil War. My only suggestion would have been to include more maps, but the prose certainly can stand alone in this magnificent treatise.