Fear in the Susquehanna Valley – the Emergency of 1862: Part 3 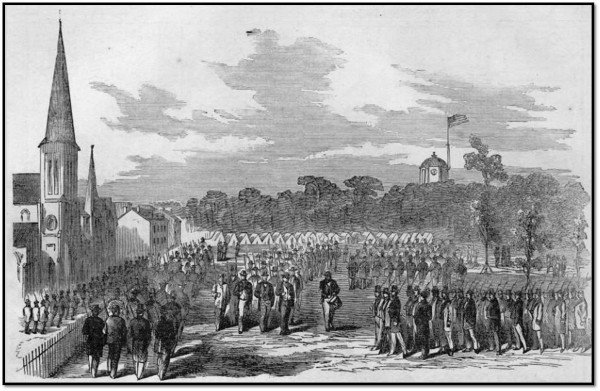 The Pennsylvania Legislature had created laws concerning the creation and utilization of a state militia back during the American Revolution, with periodic updates over the next eighty years. During the threatened Confederate invasion in September and October 1862, Governor Andrew G. Curtin used the Militia Act of 1858 as legal grounds  to call out the militia for the duration of the emergency (he would again call them out in 1863 during the Gettysburg Campaign).

On September 4, the governor issued this directive:

Whereas, in the present position of affairs, it is expedient that measures should be taken to arm and prepare our people for defence. Now, therefore, I do earnestly recommend the immediate formation throughout the Commonwealth of volunteer companies and regiments, in conformity with the Militia act of 1858. Arms will be distributed to organizations so to be formed, agreeably to the provisions of that act.

It is further recommended that, in order to give due opportunities for drill and instruction, all places of business be closed daily at 3 o’clock in the afternoon, so that all persons employed therein may, after that hour, be at liberty to attend to their military duties.

The cheerful alacrity with which the men of Pennsylvania have hitherto given themselves to the service of the country, has pressed heavily on her military resources.

I am reluctant to ask her people to assume further burdens, but as their safety requires that they should do so, it is in their behalf that I put forth the recommendations herein contained and urge a prompt compliance with them.

Given under my hand and the great seal of the State at Harrisburgh, this 4th day of September, in the year of our Lord, 1862, and of the Commonwealth the eighty-seventh. By the Governor.

Among the men who responded in downtown York was a company with some of the leading young businessmen and civic leaders. Captained by Dr. Charles Nes (son of a former U.S. congressman), the company included Arthur Briggs Farquhar (a young industrialist who a year later would play a key role in the surrender of York to Confederate generals Jubal Early and John Gordon), John Rutter (of the family which founded the Rutter’s dairy chain), businessman/farmer John Brillinger, merchant Samuel Waring, and others. Several other companies also contained a sprinkling of local luminaries including members of the Loucks family (for which Loucks Road is named).

According to Prowell’s History of York County, “When the enemy threatened to invade Pennsylvania, Home Guards, were organized at York, for the defence of the town. These companies were sworn into the service on September 12 and continued to drill and practice until September 24. The danger of the enemy approaching York had been averted by the battle at Antietam. These companies, which were fully armed and equipped, were mustered out of service on September 24. The following is the muster roll of the different companies of Home Guards at York: