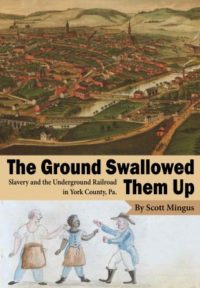 Excerpted from my popular book, The Ground Swallowed Them Up: Slavery and the Underground Railroad in York County, Pa. (available from the York County History Center; not sold on amazon).

“Lewisberry and surrounding Newberry Township had long been a safe haven for escaped blacks. With a strong influence from early Quakers and other English settlers, slavery had never taken a strong foothold. Refugees found shelter, food, clothing, and a welcome spirit, and several put down roots and found work. Ellis and Ruth Lewis had been among the earliest settlers in the Red Land valley, named for the red sandstone in that region. Their son, Major Eli Lewis, founded the village of Lewisberry in 1798 when he was 48 years old. An early member of the Pennsylvania Abolition Society, Eli was outspoken in his anti-slavery views. The prosperous merchant/poet and his wife raised four sons, all of whom later became public leaders.

“One of them, the well-read and cultured Dr. Webster Lewis, known as “a man of public spirit and independent thought,” abhorred the very idea of slavery. The multifaceted Lewis, who was married to a descendant of colonial landowner John Rankin, also practiced law in York County, operated a profitable store, and managed a sprawling farm where he grew poppies to extract opium for his patients. He is believed to have helped organize the early Underground Railroad efforts in the Red Land region. He connected his covert activities with fellow Quaker operatives William and Phebe (Wierman) Wright and their relative Joel Wierman in northeastern Adams County. Two different William Wrights were prominent in the early Underground Railroad movement in southern Pennsylvania, one living near York Sulphur Springs (now York Springs) in Adams County and the other in Columbia in Lancaster County. William and Phebe soon began funneling fugitives to Lewis.

“One of his sons, Dr. Robert Nebinger Lewis, later joined him in his medical practice, as well as in his secretive assistance to the black refugees. It was not without peril, particularly as slave catchers began to target the region. At one point, an angry slaveholder pointed a loaded pistol at the younger Lewis and squeezed the trigger. Luckily for the physician, it failed to discharge. Robert later moved to Dover and established a secret way station in his spacious home there. He would face more several attempts on his life by angry pro-slavery sympathizers before he died of natural causes in 1846.”

Dr. Webster Lewis’s younger brother Ellis Lewis served as the chief justice of Pennsylvania’s Supreme Court from 1854-1857. Another brother was a prominent York merchant, railroad executive, and banker and the fourth brother was an attorney.

Were any of your ancestors involved in the Underground Railroad? What stories do you have that have been passed down over the years?