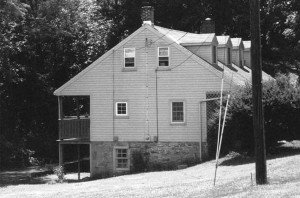 This historic old house off Locust Lane in Farmers, Pa., is where Confederate Brig. Gen. John B. Gordon met with a delegation of civic leaders from York on Saturday night, June 27, 1863. Their topic? Discuss the specific terms by which the Rebels would enter York peacefully the next morning. Those terms in some Southern accounts are deemed a surrender, but few York Countians used that wording.

An eyewitness to the meeting penned a letter after the war which ended up being published in the New York Herald on May 25, 1868.

The attendees from York were Chief Burgess David Small (the editor of the local Democratic newspaper), Committee of Safety members Thomas White and W. Latimer Small, influential businessman A. B. Farquhar, and Col. George Hay of the 87th Pennsylvania (off-duty while recovering from illness).

Earlier in the day, Farquhar had met with General Gordon at Abbottstown for preliminary (and unauthorized) talks. He had ridden back to York and reported the discussion. The five-man delegation piled into Farquhar’s carriage and rode westward to locate Gordon and finalize the terms.

Here is the rarely seen account from the New York paper. Several new details of the dialogue between the Georgia general and the delegation are brought forth.

“On the day before the Rebels reached York, a leading businessman and a member of the Committee of Safety[Farquhar]  ‘drove out to reconnoiter,’ and, passing the Rebel pickets, met Gen. Gordon (late Conservative candidate for Governor of Georgia) not eight but eighteen miles from the borough, where a promise was obtained from the General that he would “protect persons and property,” on condition that the Rebels should be provisioned while they remain in or near York. Returning, this member of the Committee of Safety passed the Rebel pickets only five miles from York (they were subsequently drawn back two or three miles) , and hastened to the borough, being sharply chased by Rebel horsemen–Gen. Gordon not intending to let him go back in advance of his men. He was thus enabled to warn a small militia force under Major Haller so as to enable it to escape capture by flight.

A town meeting was thereupon held, at whose request Chief Burgess Small and others were sent to negotiate with Gordon “for the safety of our citizens” and their property. Said deputation fully expected to meet the Rebels just out of town, but did not until seven miles distant. Our correspondent proceeds:

‘At this audience, our mayor had but little to say, and that was to arrange for the control of the place; this was soon fixed, Gordon suggesting that all the rum shops be kept closed, and promising that his men would ‘be shot like dogs if they insulted a lady,’ &c., &c. The next speaker, Col. Hay, commenced by assuring the General that it would be much more in accordance with our feelings to have met him at the head of an armed force–‘that even the few fighting men our little town could raise were on duty across the river; and, as we were powerless to resist, we desired to make the best terms possible.’ He went on to say we did not propose to surrender, but on the contrary they would find our flags up, and waving such little defiance as we could show (or words to that effect).

This sentiment was cordially endorsed by the committee, and evidently respected by the General, for he gave them a pass back again to town through the lines, remarking as he did so (to the Committee)–‘It is unusual to pass strangers before us when invading an enemy’s territory; but I cannot refuse to believe men who have spoken as you have, and, if your sentiments are true, there is no danger. I ask nothing more than you remain in town until our arrival.’

Not one word was said about ‘compounding the safety’ of the place, nor was a word said of surrender, except to ignore it. The Rebels reached town the following morning ; and I may say that they kept faith better than we expected.”

So who was this correspondent? Farquhar, Hay, and David Small are mentioned, or alluded to in the case of Farquhar, so that would leave W. Latimer Small and Thomas White (a known Copperhead). The language and sentiment would suggest Latimer Small.