Eyewitness accounts from Texans who fought at Antietam 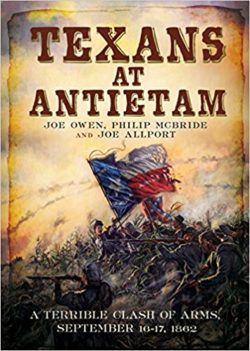 “Known as the Battle of Antietam by the Union and the Battle of Sharpsburg by the Confederates, the day-long battle near Antietam Creek on September 17 [1862] is widely recognized as the single bloodiest day in American history. On that one day, 3,911 American soldiers died in battle… As horrific as all those death numbers are, this author is compelled to note that Civil War deaths were caused by Americans engaged in war with other Americans. In 1862, we did not need a European army opposing us,  a suicidal terrorist enemy, or modern weaponry to inflict the single most horrendous death toll in our nation’s history. We did it to ourselves.”

Authors Joe Owen (a park ranger at the Lyndon B. Johnson ranch in Texas), Philip McBride, and Joe Allport have scoured old Texas newspapers (and some from other states) to assemble what is undoubtedly the most comprehensive collection of first-person accounts of the tragedy at Antietam written by Texans who participated in the fighting on the tidy farms near the meandering creek.

In Texans at Antietam: A Terrible Clash of Arms, September 16-17, 1862, the trio present hundreds of newspaper articles by and about the men of the Texas Brigade concerning their service at Sharpsburg. These are unfiltered and unchanged from their original publication, and are offered without annotation. The authors include short biographies of leading personalities and letter writers, as well as offering background setting and commentary.

The accounts given in the book include that of Russell Crawford Mitchell, the grandfather of famed novelist Margaret Mitchell (the author of Gone With the Wind). Sergeant Mitchell, the son of a Methodist minister, served at Sharpsburg in the 1st Texas Infantry. He survived a head wound that fractured his skull in two places during the battle and never fought again. After recovering, he was the general ward-master for the Institute Military Hospital at Atlanta. He married and raised a family in Georgia, and never moved back to the Lone Star State. He died in 1905.

Another wounded Texan, Amos Hanks, reportedly spoke with President Lincoln when he visited the Rebel field hospital, telling the Yankee leader that “We’re kin, Abe, shore’s you’re born. I’m a Hanks, and so was your ma. Mighty glad to see you, Abe, old boy: but would prefer that it would have been under circumstances more of an equality between us.” Lincoln smiled and moved on.

The book is filled with similar human interest stories as related to the press by the old soldiers about themselves and their long-ago comrades. Most were written in the late 19th century; a few originated well into the 20th century. Some are humorous, but most are terse prose concerning the battle and the exploits of individual soldiers.

This is a worthy addition to the pantheon of recent books written about the battle of Antietam, and is sure to be of strong interest to those readers who enjoy first-person accounts written by participants. A companion to Joe Owen’s earlier Texans at Gettysburg, this book is the second in what will be a series of similar books of newspaper accounts of the famed Texas Brigade. Owen is hard at work on the third volume, which will cover the fighting at Gaines Mill during the 1862 Peninsula Campaign a few months prior to Antietam.