Excellent new book on the Battle of Allatoona Pass released 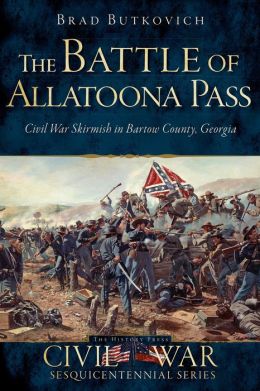 Brad Butkovich is well known in the hobby of Civil War miniature wargaming for his series of outstanding, well researched scenario books which gamers use to recreate battles in the Western Theater. He has developed a well deserved reputation for accuracy and deep research in his presentations. A few years ago, Brad translates his skills for research and story telling into a full sized book on the battle of Pickett’s Mill in Georgia, easily the finest treatise on this long-forgotten but strategically important battle. His battle actions are crisp; his prose compelling and interesting; and his interpretation spot on.

Now, Brad has continued in this same vein with a new book released in late June 2014 by The History Press on The Battle of Allatoona Pass: Civil War Skirmish in Bartow County, Georgia. This is also part of The History Press’s popular Civil War Sesquicentennial Series, which has explored scores of smaller battles and regional topics.

Fought on October 5, 1864, the battle was a fight to control the vital Union supply lines north from the recently captured city of Atlanta toward supply depots in Tennessee. As Confederate General John Bell Hood pushed forward, his old corps (now under Alexander Stewart) engaged the Yankees in a series of small engagements along the Western Atlantic Railroad. The largest and most important of this fights was at Allatoona Pass.

A Confederate division under General Samuel G. French attacked the Union supply depot at Allatoona Pass, a gap in the North Georgia mountains created for the passage of the railroad in the decades before the War Between the States. French moved into position near sunrise on October 5, 1864. He had a dozen cannon, which soon opened fire. After a two-hour bombardment French demanded the surrender of the Union defenders, whose commander Gen. John M. Corse, readily refused to do so.  He and his men trusted their strong fortifications and favorable terrain. Farther south near Atlanta, Corse’s superior, famed Gen. William T. Sherman, also had confidence in Corse’s ability and determination to hold the pass in the event of a Rebel advance: “He will hold it: I know the man.”

French ordered his men forward, attacking from the north and west and heavily pressuring the Federals. However, about noon Confederate cavalry scouts erroneously reported that fresh Union troops were arriving. Not wanting to risk enduring a flank attack, General French withdrew in the early afternoon, ending the battle at Allatoona Pass.

In this brief, 190-page new book, Brad Butkovich brings the story of the fight to life, using dozens of primary sources (many rarely before or never used) as well as official records and military reports, contemporary newspaper accounts, diaries and letters, etc.  He liberally sprinkles the book with modern photographs of the battlefield, as well as with informative maps which augment the prose in helping the reader understand the key terrain features and troop movements.

He also examines the use of innovative weapons such as the Henry Rifles used by the 7th Illinois Infantry at Allatoona. These lever-action guns provided significant firepower on the battlefield, and a trained soldier could fire three shots per minute. This was one of the earliest uses of the Henry in the Western Theater (they had been used by an Ohio regiment at the Second Battle of Winchester back in June 1863).

The book is extremely well researched, well written, and concisely captures the essence of this battle. Like Butkovich’s previous work on Pickett’s Mill, it is an important addition to the historiography of the War Between the States in northern Georgia, and one can only hope that Brad will continue to add to this with future volumes on other fights in this region.

He maintains a Facebook page for the new book. In the publisher’s words, “In the 1840s, engineers blasted through 175 feet of earth and bedrock at Allatoona Pass, Georgia, to allow passage of the Western & Atlantic Railroad. Little more than twenty years later, both the Union and Confederate armies fortified the hills and ridges surrounding the gorge to deny the other passage during the Civil War. In October 1864, the two sides met in a fierce struggle to control the iron lifeline between the North and the recently captured city of Atlanta. Though small compared to other battles of the war, this division-sized fight produced casualty rates on par with or surpassing some of the most famous clashes. Join author Brad Butkovich as he explores the controversy, innovative weapons and unwavering bravery that make the Battle of Allatoona Pass one of the war’s most unique and savage battles.”

Marie Nesmith of the Daily Tribune News interviewed Brad recently for a column in the local Bartow County newspaper. Click here to read this to gain more background on the author and his latest book.

The Battle of Allatoona Pass by Brad Butkovich (The History Press, June 2014)