Ex-slave of Confederate officer died in Hanover in 1910 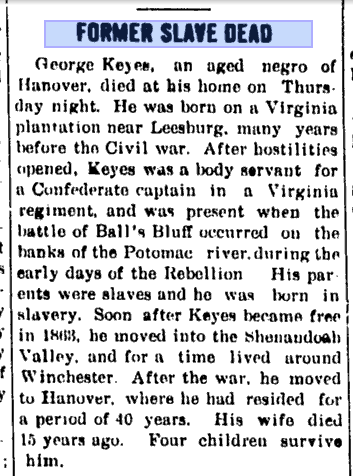 In the years following the Civil War, hundreds of former Southern slaves seeking a fresh start settled in the Susquehanna Valley. Among them was George Keyes, a Virginia-born slave who was present at the 1861  battle of Ball’s Bluff near Leesburg VA. His master was a Confederate captain. After being freed two years later and moving to Winchester in the Shenandoah Valley, Keyes moved to Hanover in southwestern York County PA after the war. He lived there for 40 years, raising a family.

Click here to view several photos of the Ball’s Bluff battlefield taken during a private tour by Jim Morgan III for the York Civil War Round Table. Here are parts 2 and 3 of the virtual tour of Ball’s Bluff.