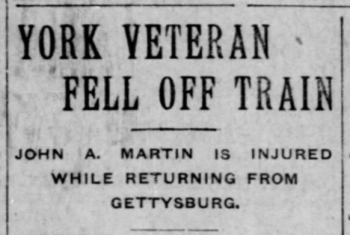 John A. Martin, like many other local veterans of the Civil War, made plans in late June, 1913, to travel to Gettysburg to attend the 50th anniversary commemoration of the battle of Gettysburg. The invitation was open to any Civil War veteran, blue and gray alike, and they did not have actually participated in the battle. Martin and a friend and fellow veteran from York attended the ceremonies, which included a visit by President Woodrow Wilson (from Virginia, one of the Southern states that had lost so many men at Gettysburg).

After the event, Martin took a train from Gettysburg to Hanover Junction, where he transferred to a northbound train on the Northern Central Railway to York. He did not quite make it to  the depot.

“Among the first accidents attending the Gettysburg anniversary celebration was that last night to Veteran John A. Martin, seventy-nine years old, 747 South Court avenue, who accidentally fell from a Northern Central train on which he was returning home.

“Veteran Martin is a member of Company A, Eighty-seventh regiment, Pennsylvania infantry, and had been attending the reunion on the historic battlefield. He was returning to his home in this city with William Brown, of Company B, Twenty-first regiment, Pennsylvania cavalry, also of this city. The veterans had left Gettysburg abut 4 o’clock yesterday afternoon [June 30, 1913] and while nearing this city Mr. Martin stepped upon the rear platform of the car.

“Just as the train rounded the curve at the bridge, just west of North Beaver street, the old soldier was seen to plunge from the platform. It was a narrow escape, considering that the bridge spanning the Codorus creek, had just been passed. The train was brought to a standstill and the crew lost no time in placing the veteran in the rear coach, after which the train proceeded to the local station. The injured man was placed on a stretcher and taken to the office of Assistant Trainmaster S. B. Drensling, where a company surgeon was summoned.

“An examination on the part of the surgeon disclosed a badly injured right hip, lacerations to the left hand and minor contusions about the body. After the injuries were temporarily dressed by the company surgeon, Mr. Martin was conveyed to the York hospital in the Laurel ambulance. It was said last night that he will be able to leave that institution some time today or tomorrow.”

A follow-up article in the July 3 paper states, “John A. Martin, 747 South Court avenue, Civil War veteran, who fell from a Northern Central passenger train on which he was returning to this city from Gettysburg last Tuesday afternoon, is greatly improved.”

Sadly, that initial optimism quickly faded, and on July 11, Martin passed away from his broken hip. The next day, the York Daily announced his death.

“John A. Martin, the aged Civil War veteran who fell from a Northern Central railway train on Monday evening, June 30 last, while returning from the 50th anniversary reunion at Gettysburg, died yesterday morning at the York hospital from the injuries he suffered. Mr. Martin was aged about 76 years. He served during the entire period of the rebellion as a corporal in Company A, 87th regiment, Pennsylvania volunteer infantry. Surviving him are his wife [Malinda] and the following children: Elmer J. Martin, South Water street, York; John E. Martin, Baltimore, and Miss Louise Martin, West York. The body was taken in charge by Undertaker Boll, who prepared it for burial and removed it to the family residence, 747 South Court alley, from where the funeral will be held.”

On June 14 at St. Mary’s Catholic Church on S. George Street, the pastor, George A. Boeckel, officiated at the high mass of requiem for Mr. Martin, who was then buried in the church’s cemetery in Spring Garden Township.

Note: John A. Martin does not appear on the roster of Company A, 87th Pennsylvania as listed in Bates’ History of Pennsylvania Volunteers. According to Dennis Brandt’s database of York County Civil War soldiers (on-line at the website of the York County History Center), Martin actually served as a corporal in Company K, 101st Pennsylvania. He was captured on April 20, 1864, at New Plymouth, North Carolina, and subsequently held at the infamous Andersonville prison in Georgia. He received his parole a year later in February 1865 and returned home to New Oxford. He moved to York County after the war and became active in the General John Sedgwick  Post No. 37 of the Grand Army of the Republic. He was a mason in Dover for several years before moving to York borough. His brother Charles of New Oxford was in the 87th.