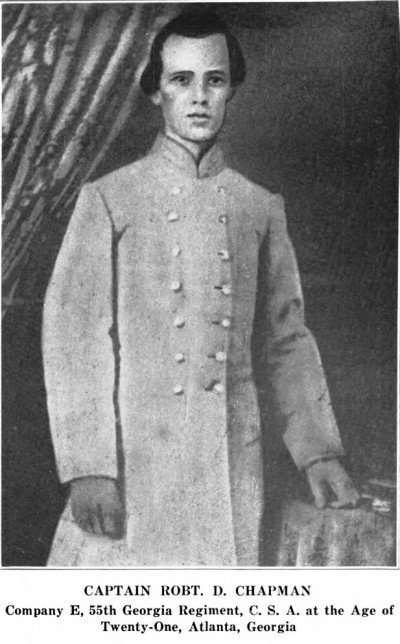 Confederate Captain R. D. Chapman, a prisoner of war being transported from Ohio to Maryland, leaped from a train just south of York, Pa. and escaped into the night. He planned to travel southwesterly to Emmitsburg, Md., but unknowingly he has been wandering for two nights through southern York County toward Manchester, Md., well east of his intended destination. He needs directions, food, and a warm place to stay.

Let’s pick up his fascinating story.

Late in the night, Chapman passed through a countryside finally devoid of farm dogs. It was a relief not to be challenged by barking canines as he pushed forward in the icy cold night of February 12, 1864. The road was rough and rocky, and the night dark and bitter. By now, the fugitive soldier was suffering greatly from blistered feet, physical exhaustion, and hunger, having not eaten anything since his train stopped in Harrisburg two days ago.

Dawn would only compound his problems. The daylight “would soon expose me to the criticism of an unfriendly people, but I could no longer wander in darkness or hide during the day in secret places without food,” he wrote. “…I had no knowledge of when or how I would get relief. I had been wandering all night in darkness among crossroads and forked roads, through a rough, hilly country; lost and misled from any desired course…”

He sought rest in a secluded place beneath the frost-covered boughs of some fallen trees a short distance from the road. There he could recover some of his strength as he made plans for the day’s travel. For the first time since leaping from the train’s window, he examined his injuries and bruised. They were “healing up nicely but I was a little disfigured.”

He soon made up his mind on a course of action.

While resting in seclusion, Captain Chapman decided on a “bold, aggressive plan of action,” at least in his opinion. He had no idea of his location or any geographical feature, but he decided to rise and strike out in the morning sunshine. He would take his chances with any passersby, “trusting Providence with the result.” A chance encounter that went bad could result in him being returned to captivity and eventually hauled off to Point Lookout after all of his exertions.

He entered the roadway and “started out with all the manly courage that circumstances would warrant.”

Soon he saw a man coming in the opposite direction riding a white mule. The stranger was whistling a familiar tune, to which he was keeping time by tapping a stick on his old mule. Because the man “exhibited a careless, indifferent disposition,” Chapman decided to strike up a conversation with him.

“Good morning,” came the reply. So far, so good. Chapman decided to carry on the conversation.

“Please tell me me how far it is to,” he paused as if searching for a forgotten name. Of course, he had no clue what town might be nearby.

Chapman was pleased. The Georgian believed that meeting a white mule on a cold frosty morning was a sure sign of good luck. Now his spirits rose as his prospects brightened.

He decided to go to Manchester, spend some of his $5 gold piece which he still carried in his pocket, buy a book, and pretend he was a traveling book salesman trying to drum up interest in his company’s latest title. He would take the fake name of Charlie Duncan (he had previously used several other aliases in his adventure).

Just before he walked into Manchester a very cold blizzard developed, adding to his travel difficulties. It was afternoon when he came into sight of the little town. He stopped at “an old dilapidated settlement” just out of Manchester, where an old lady and little boy lived. They proved to be kind hosts, and soon the road-weary refugee was sitting in a cozy old arm chair by a roaring fireplace drinking coffee and eating a much needed meal. He also learned the names of the local prominent citizens, ascertaining which ones were Copperheads (southern sympathizers) who might assist him. He tried to pay the old lady for her kindness, but she refused.

It was now late in the evening of February 13. The storm had abated somewhat, so Chapman resumed his trek. As he started out, a messenger boy overtook him; the old lady had sent him a knit woolen scarf, further bolstering his spirits. With a full belly, warm neck, and renewed hope, he would make it into Manchester, buy a book, take on the fake ID, and sleep that night in a hotel bed as “Charlie Duncan from Baltimore.” He got a ride the next day to Westminster to another hotel. The weather was bad again and the lobby was packed. A nearby Union soldier began eyeing him and sought the hotel manager in quiet conversation.

Believing he had been discovered as a Rebel soldier, Chapman paid his bill and departed in the storm for Emmitsburg, now with only 35 cents left. He hiked 15 miles through six-inch snow on the highway before stopping at a farmhouse to warm up. Just outside of Emmitsburg, the deteriorating weather forced him to stop for the night at the house of a farmer named Bowers, who proved to be a strong pro-Union man. However, he had a beautiful daughter named Sallie, so the conversation around the supper table was relaxing and enjoyable.

The next day the weather was not conducive to walk the four miles to Emmitsburg to seek out the McBride family, so Mr. Bowers invited “Duncan” to stay. During the day, Sallie had a friend come over who grew up in Baltimore. Chapman had to scramble to avoid blowing his pretense he was a Baltimore book salesman.

He finally made it to the McBrides, where he revealed his true identity as an escaped prisoner and friend of the Confederate soldier Miss Annie McBride had treated after Gettysburg. The McBrides and a long series of Confederate sympathizers over the next few days helped Chapman make it through Frederick down to Baltimore, where he checked into a hotel as “Henry R. Jackson from Ohio”. Armed with money from his new friends in a few days he caught a train to Harper’s Ferry, arriving on February 26 and taking the false identity of a “R. A. Clayton from Baltimore.”

He spent the next few days hiking south into the Shenandoah Valley, finding shelter and help from people his Copperhead friends in Baltimore had recommended. Finally on February 28, nearly two weeks after escaping the trainload of prisoners in York, Pa., Captain R. D. Chapman learned of a nearby camp of five or six Virginia cavalrymen home on furlough from the army. Chapman soon located them. When they departed to return to the army he rode 90 miles with them south to the Confederate lines.

Chapman passed through the Rebel lines on March 1 and reported to the commanding officer, ending his long quest for freedom which had begun hundreds of miles away in the Cumberland Gap of Tennessee the previous year. After traveling to Richmond, he was able to secure a new uniform and ID papers, and send a message to his anxious family and friends back home that he had escaped and was safe. He also received a new assignment closer to home in Georgia, starting in June 1864.

He became the adjutant at the Andersonville prison camp, ironic for a man who had been a prisoner himself for so long.

In the fall with the Union army threatening southern Georgia, Chapman escorted a large group of enemy prisoners over to Savannah, where he rejoined his regiment. He fought in the Carolinas Campaign in the army of General Joseph E. Johnston before surrendering in April 1865.

With the war over, he finally went home to his loved ones and resumed civilian life.

Chapman married and opened a retail store in Georgia. He moved with his family to East Texas in 1871 and opened another store the next year.  Prospering, he later became a postmaster in Huntington, Texas, and opened the largest general store and emporium in the entire region. He eventually moved to Dallas and then to Houston where well into his 80s he was the bailiff for the local court. His brother, a doctor, also moved to Texas.

Robert Duncan Chapman, after a very long and quite adventurous life, died in Houston on May 30, 1933, at the age of 93, yet he never forgot leaping out of a train window in York, Pennsylvania, on a cold February night during the War Between the States.

For more on Captain Chapman’s life and adventures, read his book A Georgia Soldier in the Civil War 1861-65. There is also considerable information on his antebellum life on a descendant’s webpage. See also this website with a summary of his escape from Cumberland Gap.