More than 11,000 Confederate soldiers passed through York County, Pennsylvania, in the last days of June 1863 during the Gettysburg Campaign. Days later, most of the men, other than 100 or so deserters picked up locally by Federal authorities, fought at the battle of Gettysburg.

None of the Southern soldiers was as colorful, or controversial, as Brigadier General William Smith of Virginia. He was widely known in the U. S. as “Extra Billy,” a sobriquet given to him by a political enemy on the floor of Congress back in the 1830s. Smith, at the time, was a young postal contractor who owned the main interstate routes from Virginia down to Georgia. Always aggressive in business and politics, he took advantage of a loophole in the law that enabled him to charge extra for mileage, excess baggage, and other services. Detractors deemed him “Surplus William” or “Extra Billy.”

The latter nickname stuck for all time.

Before the Civil War, Smith was a powerful attorney, state legislator, governor of Virginia during the Mexican War, the 49ers’ lawyer in California during the Gold Rush, and a five-term pro-slavery U. S. congressman. He had since become a Confederate congressman and had taken up arms against the government that he had so long represented.

At 65 years old, Extra Billy Smith was the oldest general at the battle of Gettysburg. He delivered a less-than-memorable martial performance.

However, on Sunday, June 28, 1863, he reportedly delivered a quite memorable speech during a military parade through York, Pennsylvania. At least, that is according to an eyewitness account by Confederate artillerymen Major Robert Stiles.

Here are the circumstances of that long-ago display of entertaining oratory.

Sunday, June 28, was a day of anxiety and high drama for the 8,600 citizens of York, the seat of York County and a major industrial and transportation hub situated between Harrisburg and Baltimore. At 10:00 a.m., more than 2,000 Georgia infantry and Virginia Cavalry marched eastward through York’s streets on their way to attack Union militia defending the world’s longest covered bridge. People in their Sunday finery on their way to church instead watched the martial parade, replete with marching bands, flags flying, and glistening artillery.

At noon, it was Extra Billy’s chance to amuse and entertain the locals. He was part of the main column of Confederates, which marched into York from the north on George Street from Emigsville. They had marched there from their overnight camp near Big Mount. Smith, always keen to be the center of attention, left his brigade of Virginians to camp on the hills north of York and rode into the borough at the head of Colonel Isaac Avery’s brigade of North Carolinians. Yorkers still filled the sidewalks to watch this second display of Southern martial arms.

Here is Major Stiles account of what came next. Extra Billy was at his rollicking best.

By this time the reader has doubtless learned that things were not likely to be dull when our old friend “Extra Billy” was about; that in fact there was apt to be “music in the air” whenever he was in charge. On the occasion below described, the old Governor seemed to be rather specially concerned about the musical part of the performance.

We were about entering the beautiful Pennsylvania town of York, General Smith’s brigade in the lead. Under these conditions, feeling sure there was likely to be a breeze stirring about the head of the column, I rode forward so as to be near the General and not to miss the fun. As we approached, the population seemed to be very generally in the streets, and I saw at a glance that the old Governor had blood in his eye. Turning to Fred, his aide,–who was also his son, and about the strongest marked case of second edition I ever saw,–he told him to “Go back and look up those tooting fellows,” as he called the brigade band, “and tell them first to be sure their drums and horns are all right, and then to come up here to the front and march into town tooting ‘Yankee Doodle’ in their very best style.”

Fred was off in a jiffy, and soon here came the band, their instruments looking bright and smart and glistening, in the June sunlight–playing, however, not “Yankee Doodle,” but “Dixie,” the musicians appearing to think it important to be entirely impartial in rendering these national airs, and therefore giving us “Dixie” by way of prelude to “Yankee Doodle.”

When they got to the head of the column, a band struck up “Yankee Doodle,” and the Governor, riding alone and bare-headed in front of his staff, began bowing and saluting first one side and then the other, and especially every pretty girl he saw, with that manly, hearty smile which no man or woman ever doubted or resisted–the Yorkers seemed at first astounded, then pleased, and finally, by the time we reached the public square, they had reached the point of ebullition, and broke into enthusiastic cheers as they crowded about the head of the column, actually embarrassing its progress, till the old Governor,–the “Governor-General,” we might call him,–nothing loth, acceded to the half suggestion and called a halt, his brigade stacking arms, and constituting, if not formally organizing, themselves and the people of York into a political meeting.

It was a rare scene–the vanguard of an invading army and the invaded and hostile population hobnobbing on the public green in an enthusiastic public gathering. The General did not dismount, but from the saddle he made a rattling, humorous speech, which both the Pennsylvanians and his own brigade applauded to the echo. He said substantially:

“My friends, how do you like this way of coming back into the Union? I hope you like it; I have been in favor of it for a good while. But don’t misunderstand us. We are not here with any hostile intent– unless the conduct of your side shall render hostilities unavoidable. You can see for yourselves we are not conducting ourselves like enemies today. We are not burning your houses or butchering your children. On the contrary, we are behaving ourselves like Christian gentlemen, as we are.

“You see, it was getting a little warm down our way. We needed a summer outing and thought we would take it at the North, instead of patronizing the Virginia springs, as we generally do. We are sorry, and apologize that we are not in better guise for a visit of courtesy, but we regret to say our trunks haven’t gotten up yet; we were in such a hurry to see you that we could not wait for them. You must really excuse us.

“What we all need, on both sides, is to mingle more with each other, so that we shall learn to know and appreciate each other. Now here’s my brigade–I wish you knew them as I do. They are such a hospitable, whole-hearted, fascinating lot of gentlemen. Why, just think of it–of course this part of Pennsylvania is ours to-day; we’ve got it, we hold it, we can destroy it, or do what we please with it. Yet we sincerely and heartily invite you to stay. You are quite welcome to remain here and to make yourselves entirely at home–so long as you behave yourselves pleasantly and agreeably as you are doing now. Are we not a fine set of fellows? You must admit that we are.”

At this point my attention was called to a volley of very heated profanity poured forth in a piping, querulous treble, coming up from the rear, and being mounted and located where I commanded a view of the road, I saw that the second brigade in column, which had been some distance in the rear, had caught up, and was now held up by our public meeting, which filled and obstructed the entire street, and that Old Jube, who had ridden forward to ascertain the cause of the dead-lock, was fairly blistering the air about him and making furious but for the time futile efforts to get at Extra Billy, who in plain sight, and not far off, yet blissfully unconscious of the presence of the major-general and of his agreeable observations and comments, was still holding forth with great fluency and acceptability.

The jam was solid and impervious. As D. H. Hill’s report phrased it, “Not a dog, no, not even a sneaking exempt, could have made his way through”–and at first and for some time, Old Jube couldn’t do it, and no one would help him. But at last officers and men were compelled to recognize the division commander, and he made his way so far that, by leaning forward, a long stretch, and a frantic grab he managed to catch General Smith by the back of his coat collar. Even Jube did not dare curse the old General in an offensive way, but he did jerk him back and around pretty vigorously and half screamed:

“General Smith, what the devil are you about! stopping the head of this column in this cursed town?”

“Having a little fun, General, which is good for all of us, and at the same time teaching these people something that will be good for them and won’t do us any harm.”

Suffice it to say the matter was amicably arranged and the brigade and its unique commander moved on, leaving the honest burghers of York wondering what manner of men we were. I should add that General Early had the greatest regard and admiration for General Smith, which indeed he could not well avoid, in view of his intense patriotic devotion and his other sterling and heroic qualities. I have seldom heard him speak of any other officer or soldier in the service, save of course Lee and Jackson, in such exalted terms as of the old “Governor-General.”

So, there you have it, the odd spectacle of a well-known enemy general, parading before throngs of bystanders in a conquered town, causing them to laugh uproariously at his amusing antics instead of cowering in fear or trying to take a pot shot at him. Some of the crowd likely were abolitionists who took exception with Smith’s long track record of racism and subjugation of black people. Some were pro-Union men anguished at the thought of the division of the country. Others were sympathetic to the South. Most, however, were simply there out of curiosity to watch the Rebels march into town. All appeared to be thoroughly entertained by Extra Billy Smith.

It goes down as one of the more memorable parades in York County’s long history.

Smith’s speech is taken from Robert Stiles, Four Years under Marse Robert, New York and Washington: The Neale Publishing Company, 1904, pages 202-205. Note that the speech is not mentioned in any local York accounts of the Rebel occupation. However, Stiles was a chronicler of Confederate activities during the war, so, considering Extra Billy’s penchant for speechmaking, it likely occurred somewhere between Emigsville and York’s Centre Square. 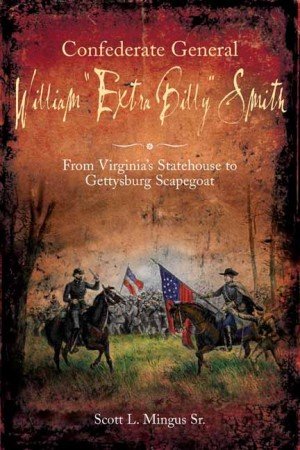