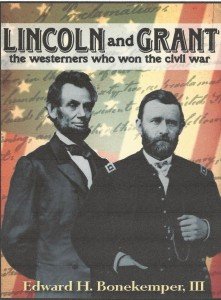 The York Civil War Round Table will feature Civil War & military history author Edward H. Bonekemper, III at its monthly meeting on May 16, 2012. The topic of the evening will be “Lincoln and Grant: The Westerners Who Won the Civil War.” This is Mr. Bonekemper’s fifth Civil War book to be published.

The meeting will be held at 7:00 p.m. on Wednesday evening in the auditorium of the York County Heritage Trust at 250 E. Market Street in downtown York, Pennsylvania. There is no charge for admission and the public is welcome! Parking is also free!

Incredibly, this is the first-ever book-length study of President Abraham Lincoln and General Ulysses S. Grant. It explores the reasons for their successful teamwork as commander-in-chief of the victorious Union forces in the American Civil War.

Its chapters tell the story of a president desperate to find a general with the courage and skills the North needed for a Civil War victory, a general who had difficulty even getting a command at the start of the war but rose through the ranks of senior generals with victory after victory, Lincoln’s protection of Grant when he came under political and public attack, and the full-blown development of one of the greatest civilian-military partnerships in history.

Ed is the author of four other Civil War books: “How Robert E. Lee Lost the Civil War,” “A Victor, Not a Butcher: Ulysses S. Grant’s Overlooked Military Genius,” ” McClellan and Failure: A Study of Civil War Fear, Incompetence and Worse,” and “Grant and Lee: Victorious American and Vanquished Virginian.” He is a dynamic, controversial and informative speaker who will both inform and challenge you as his programs always culminate in lively audience discussions. Ed will have copies of his books available for sale.

Bring a friend to this informative and enjoyable evening!