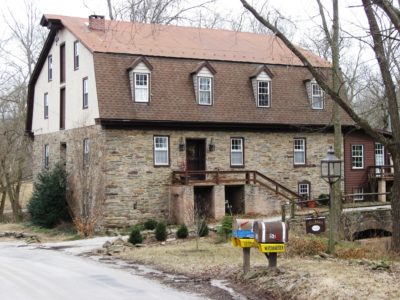 This old grist mill on the banks of the Big Conewago Creek in extreme southern Washington Township, York County, Pennsylvania, has a long and storied history, including playing a role in feeding Confederate troops in the Gettysburg Campaign during the American Civil War. Known for many years as the “Eisenhart Mill” for a post-war owner, during the War Between the States, the mill was owned and operated by a miller named Emanuel Butt.
On June 27, 1863, Confederate troops of the veteran division of Major General Jubal A. Early marched through Adams County to East Berlin and subsequently camped in nearby York County at the hamlet of Big Mount. Along the way, dozens of residents were victimized by foraging patrols which were seeking supplies, food, and, most of all, fresh horses and mules.

Confederate patrols, mostly from the 17th Virginia Cavalry which accompanied Early’s long column of infantry and artillery, roved for miles along the route of march. They stopped at nearly every farm, including the old brick farmhouse pictured above on Eisenhart Mill Road. In some cases, they were greeted by fearful residents who set out milk and bread for the passing soldiers in hopes of appeasing them (rumors were flying that the Rebels meant mischief). In other cases, the citizens had fled, taking their horses and livestock to safety. There were few instances in the region where it is known Rebels broke into locked houses, but it did happen a handful of times in York County. 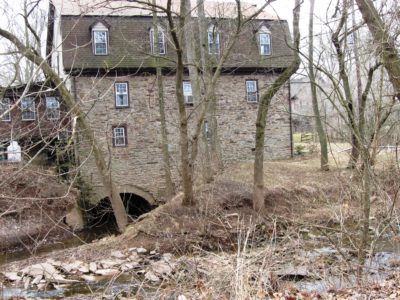 The mill was constructed in 1749, making it one of the oldest remaining mills in York County, Pennsylvania. It was bought and sold numerous times over the next 250 years, and is currently owned by a friend of mine from P. H. Glatfelter, a global paper company. The present owner has been researching the mill’s storied history, and I was glad to have contributed photocopies of the post-Civil War damage claim filed by miller Emanuel Butt’s son William (Emanuel Butt died shortly after the war before the claims commission met).
Confederate troops stopped by the mill and began to fill their empty supply wagons. They hauled out 38 barrels of freshly ground flour and hefted them into the wagons. They also went after the grain that had not yet been ground into flour and loaded18 bushels of shelled corn and 4 bushels of oats. How long the Rebels remained at Butt’s mill is unknown, but it would have taken a fair amount of time for the Confederates to empty the mill.
The grist mill is currently 3.5 stories, with the bottom two being the original field stone walls and the upper story and a half now being of wooden frame construction. At some point, a fire destroyed part of the mill, and the upper floors and roof were replaced. At 50’x60′ in dimension, this would have been a rather large mill for colonial days when it was constructed.
On April 3, 1824, a wealthy farmer named Conrad Eisenhart acquired the mill from the estate of its previous owner Jacob Welsh and integrated it into his sprawling farm. In 1846, Eisenhart sold the mill, the lands along the creek and the water rights, to Emanuel Butt. Thirteen years later, Eisenhart died, leaving his farm to his son Peter.
Emanuel Butt owned the mill through the Civil War until his death. On April 21, 1887, his son William sold the mill to Peter Eisenhart, who ran it into the 20th century. It saw a succession of subsequent owners, one of which converted it into a private home late in the century. 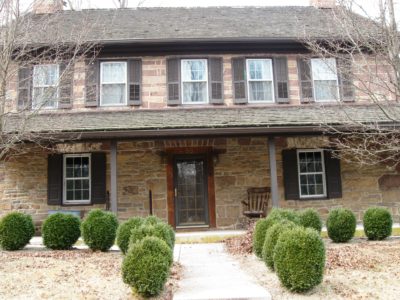 Across the street from the old mill is the miller’s house, which has also been beautifully restored and maintained.
A number of farms in the immediate area were raided by the Rebels on the same day as the mill, and, in a few cases, other farms were struck during Jubal Early’s return trip through East Berlin on June 30, 1863, as they were unknowingly en route to the Battle of Gettysburg, which started the next day. Among the nearby victims were farmer Peter J. Smith, who lost a three-year-old bay horse worth $150.
All photographs taken by Scott Mingus on Sunday, March 1, 2009.