U.S. government photo from 1979 of the heavily modified exterior of 21-23 West Market Street in downtown York, Pennsylvania. In 1863, this was the confectionery and store of prosperous merchant Valentine C. Erney.
Courtesy of the Library of Congress.
Valentine C. Erney was a Swiss immigrant who established a profitable confectionery company in downtown York. In the summer of 1863, his establishment proved to be very popular with Major General Jubal Early’s infantrymen who occupied York and its immediate vicinity.
Today, his long since demolished store is the location of York’s Cherry Lane park, a popular summertime outdoor spot to eat, look at the murals, relax with friends, and listen to live musical concerts.
What did the Confederates take from the 48-year-old Erney’s store?

Detail from from front facade of the Erney building.
Have been vacant for several years afer a long succession of stores occupied the site, it was demolished in 1978 by the City of York in order to implement a program of downtown improvements, including the construction of the Cherry Lane walkway.
Valentine C. Erney immigrated to the United States in the 1830s with his parents, Edward and Theresa. They eventually settled in York and entered the mercantile business in the thriving town.
In 1859 John Leiben‘s half lot in downtown York along the north side of West Market Street was sold at a sheriff’s sale by Samuel Forscht. Valentine Erney was the winning bidder.
At that time, the property contained a two-story home (probably frame) with a brick back building, rough cast, and a two-story, detached brick stable and slaughter house. Shortly thereafter, Erney replaced the frame house with a larger, three-story brick stone “business house” and made improvements on the brick stable. The Erneys, a well-to-do family, operated a candy company. The new building served as a store on the first floor with the family residence on the second and third stories.
Infantrymen from Major General Jubal Early‘s command raided Erney’s locked store on Sunday, June 28. They took $1500 worth of goods, including bottles of various wines and liquors, cutlery, combs, toys, notions, English pickles, pocketbooks, wallets, fancy gloves, baskets, coffees, baking powder, sugar, sardines, oranges, lemons, cigars, tobacco, and various confectioneries. Erney’s list of items taken by the Rebels is large and extensive, and it is clear he was visited multiple times.
His damage claim does not specify if the items were actually stolen, or, more likely, he sold them in exchange for what turned out to be worthless Confederate cash. Merchants and residents were allowed to file claims for such transactions if they resulted in a material loss. According to a local historian of the period, George Prowell, the Rebels “scattered their counterfeit trash around freely, paying $5 or $10 for a couple of cigars, and waiting for change.” Nearly every store in downtown York was visited at least once by the Southern soldiers.
The confectionery shop remained at 21-23 W. Market Street until l882 when Valentine Erney died.
In 1883 the property was awarded to Valentine’s brother, Joseph. Not having any need for the building, he sold it that same year to Amos Hoffman. Hoffman immediately opened his clothing store in the building and in 1886 demolished the old stable or renovated it to serve his own needs. The following year Hoffman conveyed half interest and ownership of the building to H.C. Brubaker.
In 1901, after Brubaker’s death, his widow sold her half interest in the building back to Hoffman. Hoffman’s Clothing Store continued in operation until the teens. By 1910 Charles Hoffman’s photography studio shared the premises with the men’s clothing store. The old warehouse was razed early in the 20th century, and the property later house a variety of shoe stores and other business ventures, the last of which failed in the early 1970s.

The back (north) side of the old Erney property seen from the alley way near the city market. Today, this is a nice park with sculptures and murals of old Lewis Miller paintings. 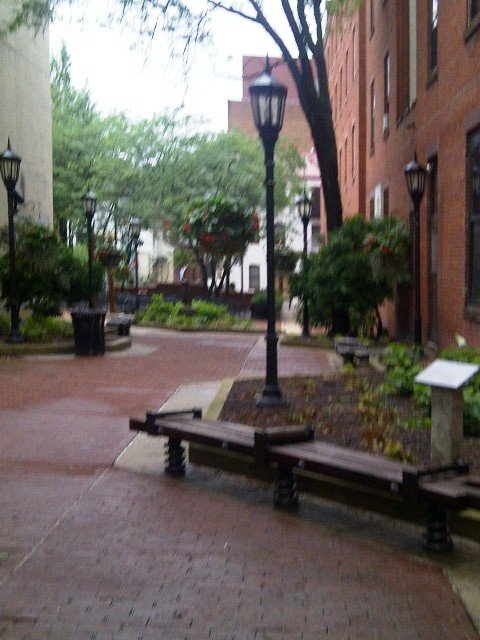