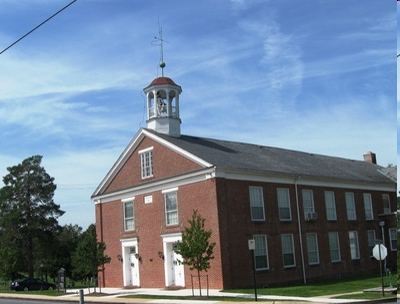 Salem Church (also called Strayer’s Church and Salem Union Church) celebrated its sesquicentennial in May 1907 at the same time the congregation honored its pastor for his 20 years of continuous service at the church. The church building, located on the north side of Canal Road near its intersection with S. Salem Church Road, has been rebuilt, remodeled, and expanded over the years. It started humbly as a log structure on a slight eminence about 3/4 mile southwest of what became the village of Dover. That site is now in the present-day cemetery. The antebellum church building, built in 1854, forms the superstructure of today’s house of worship, which is still in use.

The York Daily of April 20, 1907, examined the history of the church and its impact on the Dover community and surrounding environs. The article also briefly touched upon Salem Church’s role in the Civil War.

“At this cemetery on July 1 [1863], the day the battle of Gettysburg was begun, one of those little incidents occurred here that marked the Confederate invasion of Pennsylvania. A small squad of General [Alfred] Pleasonton’s Union cavalry, was stationed near the church, came face to face with the advance guard of Stewart’s [sic: Jeb Stuart’s] Confederate cavalry, which was then in Dover. An engagement was momentarily expected. [The Federal troopers, being in]ferior in numbers, withdrew toward Gettysburg. The Confederate force proceeded on the old state road toward Carlisle, taking with them 387 horses belonging to the farmers of Dover township.

“On the Sunday [June 28] previous to this encounter while the Rev. [Henry] Kehm was in the midst of the morning prayer, a horseman drove furiously up to the church, dismounting, he burst in upon the congregation, shouting, ‘The rebels are coming.” The whole region was then in a constant state of fear and excitement over the anticipated invasion, and the effect of the dramatic announcement was electrical. Most of the congregation being farmer folk, thinking of their stock, unceremoniously sought their teams and made for their homes, leaving only two or three scatterings of pews of worshippers to finish the service.”

Here are a few more details on the very brief skirmish of Dover, as taken from my September 19, 2008, Cannonball blog post:

On Sunday June 28, Jubal Early’s 5,000-man division had marched directly towards Dover before changing course. A horseman arrived at Salem Church (on Canal Road just west of the village) during Dr. Henry Kehm’s morning prayer. The rider dismounted, shouting that Rebels were coming. The congregants, mostly farmers, left quickly to hide their horses. However, the lengthy Confederate column Early turned southeast on Davidsburg Road and took Carlisle Road south towards York. Dover residents breathed a sigh of relief. However, their respite would be brief.

Two days later, Confederate Major General J.E.B. Stuart’s three brigades of cavalry had withdrawn from the Hanover area late on June 30 following the battle there and had marched through the night to Dover, where they camped. Union Brigadier General H. Judson Kilpatrick (a direct ancestor of both CNN newsman Cooper Anderson and socialite Gloria Vanderbilt) ordered a patrol of cavalry to bird-dog the tail of Stuart’s miles-long column as it headed northward. Commanded by Lieutenant Colonel A. J. Alexander, the detachment had managed to avoid detection as it monitored the Rebel movements.

However, as they crested the rise at Salem Church where South Salem Church Road intersects with Canal Road, they were spotted by advance pickets of Confederate Brigadier General Wade Hampton III. A firefight ensued, as the Yankees dismounted and briefly advanced toward the distant Confederate line (which likely was on the ridge just west of today’s Dover High School). Alexander withdrew down Canal Road out of sight. Later, he resumed his reconnaissance mission, trailing Stuart’s column as far as Rossville before finally turning back to report to General Kilpatrick.

No one is known to have been shot during the exchange of gunfire at Dover, an event so obscure it did not make it into the official records of the Gettysburg Campaign. However, the gunfire was remembered by local residents, and details of Alexander’s patrol have been mentioned in a few published works.