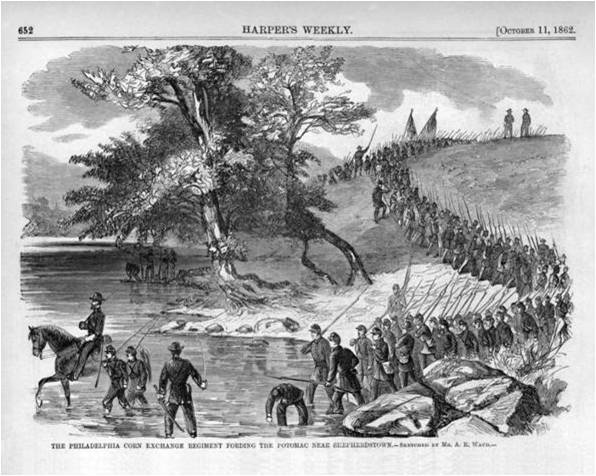 For our Friday April 12th meeting, the Harrisburg Civil War Round Table is proud to have Professor Thomas A. McGrath speak to us on the Battle of Shepherdstown, sometimes known as the Battle of Boteler’s Ford. In the days immediately following the battle of Antietam, both armies were badly bloodied and needed time to recover from their wounds. Nevertheless, a Union army feint across the Potomac resulted in a violent finale to the hard-fought 1862 Maryland campaign.

Although often overlooked by historians because, as one Union soldier termed it, Shepherdstown “was not much of a battle as modern battles go,” it had important consequences. First, it marked the end of Confederate general Robert E. Lee‘s first invasion of the North, which had been effectively repulsed at the Battle of Antietam on September 17, 1862. In addition, the Battle of Shepherdstown, where Lee’s army retreated back into Virginia, convinced Union general George B. McClellan that a second invasion of the North was possible, paralyzing the Army of the Potomac in Maryland for the next month and allowing Lee’s army time to regroup. It also contributed to U.S. president Abraham Lincoln’s disgust over McClellan’s lack of aggressiveness and the decision to remove McClellan from command of the Army of the Potomac. While the Battle of Shepherdstown paralyzed McClellan, it saved the Army of Northern Virginia. With minimal sacrifice, Lee was able to cross his army safely into the northern Shenandoah Valley, where it could rest to fight another day.

Thomas A. McGrath received his BA in History from the University of Massachusetts at Amherst and his MA in Civil War Studies from American Military University. He is currently working on his PhD dissertation at the University at Albany. Professor McGrath teaches History and English at North Country College in Ticonderoga, NY. He has served for five years as historian / interpreter at nearby Fort Ticonderoga and is an advocate for historic preservation.

Professor McGrath is the author of Shepherdstown: Last Clash of the Antietam Campaign, September 19-20, 1862, the only full-length account of the Battle of Shepherdstown. He has also written numerous articles for a variety of publications including Blue & Gray, Yankee Magazine, Gettysburg Magazine, and Adirondack Life.