The imprint “Mumper & Co.” can be found on the reverse of carte-de-visite (CDV) prints of many late 19th-century photographs taken at Gettysburg National Military Park. The primary photographer was Levi Mumper, assisted later in his career by two of his sons who eventually took over the thriving business.

Mumper was a native of Dillsburg in northwestern York County, though his parents moved to Gettysburg when he was quite young. He was related to the Mumper family that owned the farm and orchard where part of Jeb Stuart’s cavalry camped during the Gettysburg Campaign.

Here’s a brief biography of this Civil War veteran. 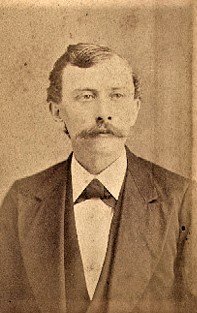 Levi H. Mumper was born on May 8, 1843, to Samuel Weaver Mumper and Mary Catherine (Shultz) Mumper in a house near Dillsburg. He was the second of seven children born to the couple. Reared in Gettysburg, Levi enlisted in Company I of the 127th Pennsylvania in August 1862. He served for nine months under Colonel William W. Jennings (the same officer that, as the colonel of the 26th Pennsylvania Volunteer Militia during the Gettysburg Campaign, would be chased out of Gettysburg by Jubal Early’s Confederates). Mumper was mustered out in Harrisburg after his term of service expired in May 1863.

Several of his comrades in the 127th returned to the ranks in mid-June to serve under Jennings in the emergency militia regiment but Mumper chose to stay home. He married and raised nine children with his first wife and one with his second mate.

He established his photography business in a studio on Middle Street vacated by Samuel Weaver. Over time, Mumper, after relocating to a building on Baltimore Street, built up a sizeable clientele. He moved to Littlestown in 1869 but later returned to Gettysburg. Mumper & Co. took photos of prominent battlefield landmarks, at times capturing the images of tourists as souvenirs.

Levi Mumper died in Gettysburg on November 28, 1916, and is buried in Evergreen Cemetery.