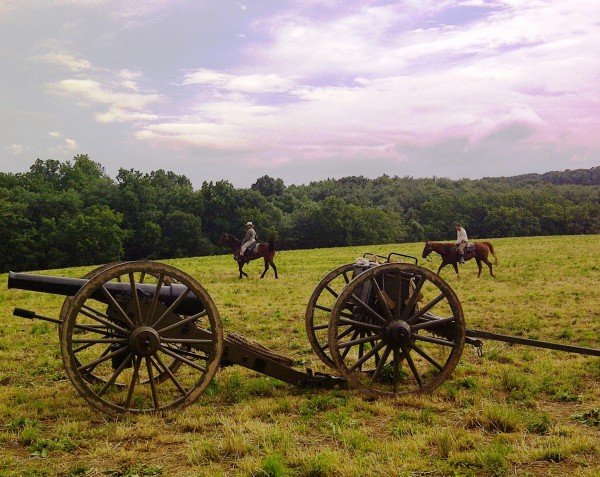 121. At the start of the Civil War, the Wrightsville Star was a nonpartisan weekly newspaper serving Hellam Township, Wrightsville, and east-central York County. It had been in business since 1854. Typical of most small town papers, it had only a few employees. After five staff members signed up for the army late in 1861, the paper ceased publication for the duration of the war. Its final wartime issue was dated January 2, 1862. The editor had for some time been urging citizens to furnish mittens for the soldiers on the front lines, an entreaty soon joined by the neighboring Weekly Mariettian and the Columbia Spy.

122. A boisterous political rally in downtown York in 1860 for Abraham Lincoln and his running mate Hannibal Hamlin turned ugly when pro-Democrat toughs began pelting the Republican “Wide Awakes” with stones and mocking them. Many of the Lincoln supporters had arrived by train from Columbia and Wrightsville. York borough would go on to cast 747 votes for Lincoln in the November election, against 870 for his opponents. Four years later, the president drew 792 votes versus 977 for Democrat George B. McClellan.

123. Lincoln’s funeral train arrived in York about 6:40 p.m. on April 21, 1865. According to a period newspaper account, “The sidewalks, doors, and windows swarmed with people. Badges of mourning and draped flags were everywhere seen… the ladies of York asked permission to lay on the coffin a wreath of flowers…” An army general agreed, and six York women solemnly carried the wreath into the funeral car, a scene punctuated my the mournful tolling of bells and a dirge played by a band. The newspaperman deemed the scene as “most touching.” The wreath was 3 feet in diameter, with an outer ring of white roses and inner circles alternating between the “choicest” red and white flowers. At 6:53, the train pulled out of the station bound for Harrisburg.

124. In July 1864, a year after the Confederate invasion of Pennsylvania, rumors meant to “frighten timid men and nervous women,” (according to the Columbia Spy) circulated in south-central Pennsylvania that Jubal Early’s Rebels were bent on a second trip to the Susquehanna River. Throngs of refugees passed through York along the turnpike to Wrightsville. There, a massive traffic jam ensued as anxious travelers awaited ferry boats to take them over to Columbia. Adding to the fright, unsubstantiated reports came that the Rebels had taken the Conowingo bridge downstream in Maryland. After almost a week of uncertainty, things finally calmed down when General Early returned to the Shenandoah Valley after fighting the Battle of Monocacy near Frederick, MD, and marching to the forts outside of Washington, D.C. The ferryboat operators made a small fortune as the refugees recrossed and returned to York and Adams counties.

125. The 87th Pennsylvania, largely from York and Adams counties, fought at the Battle of Monocacy, seeing heavy combat on the Thomas Farm and suffering several casualties. After the war, on November 24, 1908, more than 250 veterans from the 87th and two other Pennsylvania regiments (67th and 138th) from the Army of the Potomac’s Sixth Corps dedicated an impressive 35-foot high granite memorial on the battlefield.

126. Sergeant Charles H. Ilgenfritz of the 207th Pennsylvania received a Medal of Honor for bravery in the fight for Fort Sedgwick on April 2, 1865, just a few days before Robert E. Lee abandoned Petersburg and Richmond and tried to escape with his army, a task which ended in surrender at Appomattox Courthouse. Ilgenfritz’s citation reads, “The color bearer falling, pierced by 7 balls, he immediately sprang forward and grasped the colors, planting them upon the enemy’s forts amid a murderous fire of grape, canister, and musketry from the enemy.” Ilgenfritz is buried in York’s Prospect Hill Cemetery.

127. Members of the 187th Pennsylvania Infantry, including several York Countians, served as the honor guard when Lincoln’s funeral train stopped in Philadelphia in mid-April 1865. They escorted the body to Independence Hall and stood at attention while 200,000 visitors passed by as Lincoln lay in state.

128. The train carrying President Lincoln stopped at Hanover early in the evening of November 18, 1863, as he was on his way to Gettysburg to deliver what later became famous as the Gettysburg Address.  He did not plan to make a public appearance during the 8-minute stop. However, a crowd had gathered in hopes of seeing the president. “Father Abraham,” the Rev. M.J. Alleman called out, “your children want to hear you.” Lincoln, hat in hand, emerged from his car. “Well, you have seen me,” he remarked, “and according to general experience, you have seen less than you expected to see.” The crowd responded with what a local reporter termed “great merriment.” A small boy named Jackie Melsheimer, held up by his father, handed Lincoln an apple, which the president smilingly accepted.  Lincoln pointedly addressed the crowd about the June 30 Battle of Hanover, “I trust that when the enemy was here the citizens of Hanover were loyal to our country and the Stars and Stripes. If you are not all patriots in support of the Union, you should be.” After some young ladies presented him with flowers, Lincoln retired as the train steamed onward to Gettysburg.

129. Colonel John William Schall, a prewar York merchant and businessman, twice temporarily led Union brigades in combat, once at Second Winchester and again at Cold Harbor. He was normally the commander of the 87th Pennsylvania, but battlefield injuries and promotions gave him the opportunity to try his hand at managing larger groups of soldiers.  Schall survived a serious wound to his right forearm at Cold Harbor and returned to his regiment. He served again as a colonel of an infantry regiment in the Spanish-American War.

130. Another Civil War colonel from York was far less fortunate. Thomas Andrew Zeigle had been an officer in the Mexican War. At the age of 37, in August 1861 he became the first colonel of the newly raised 16th Pennsylvania, a 3-month regiment. He later helped raise and organize a company for the 103rd Pa., but died on July 15, 1862, in Warrenton, Va., of “congestion of the brain.” He is buried in Prospect Hill Cemetery.

131. The June 30, 1863, Battle of Hanover was the largest military engagement in York County history, with about 7,500 men on the field at various points in the conflict. Exact casualty counts differ from source to source, but a common estimation is that J.E.B. Stuart’s Confederate cavalry sustained 74 casualties while inflicting 154 upon the Union troopers. Wounded men were treated (sometimes for weeks) in homes, churches, schools, and public buildings. Many of the dead were initially buried in Hanover, but were later dug up and transported to Gettysburg for reinterrment in the newly created National Cemetery.

132. Most of the dozens of campsites used by the armies in York County are long gone, mostly to urban sprawl. For example, the main campsite of the famed Louisiana Tigers is now the Harley Davidson manufacturing complex off of today’s U.S. Route 30. A 1960s housing development sits on what was once the Union militia and later the Confederate campsite at Wrightsville. Dover’s subdivisions and the high school sit on the ground where J.E.B. Stuart’s cavaliers once slept. In Spring Grove, the Kennie’s shopping center is on the campgrounds of the 35th Battalion, Virginia Cavalry. Efforts are underway to try to preserve the historic Hoke House which was the Rebel HQ. Likewise, Stuart’s campsites around Dillsburg no longer exist (Mumper Lane area). Only a handful of sites remain, mostly on private property.

133. The last Civil War veteran living in York County likely was Charles Yeingst, who had enlisted in the 101st Pennsylvania in February 1865 a few months before the war ended. He was only 16 at the time. Decades later he farmed in Carroll Township, and then died in 1944 at his granddaughter’s house in Dillsburg. In one of his last interviews,he remained fiesty. If he “were only a couple years younger, he’d like to serve his country again in order to get a crack at Hitler, Mussolini, and Hirohito.”

134. The last black veteran cowas Fawn Township’s John Aquilla Wilson, who was 101 years old when he  died in 1942. “Quil” had served in the 32nd U.S. Colored Troops and was a veteran of the Skirmish of Wrightsville.

135. A number of former Confederate soldiers lived in York County after the war and are buried in this area. Some, such as the Latimer brothers of Shrewsbury, were residents before the war. The Latimers had moved to York County from the South with their mother following their father’s death. Holding strong Southern convictions, they enrolled in a Rebel regiment from Maryland. During the Gettysburg Campaign, they appear to have been on detached duty as guides for Jubal Early as their relatives in downtown York reported seeing the brothers as they accompanied the column through the streets.