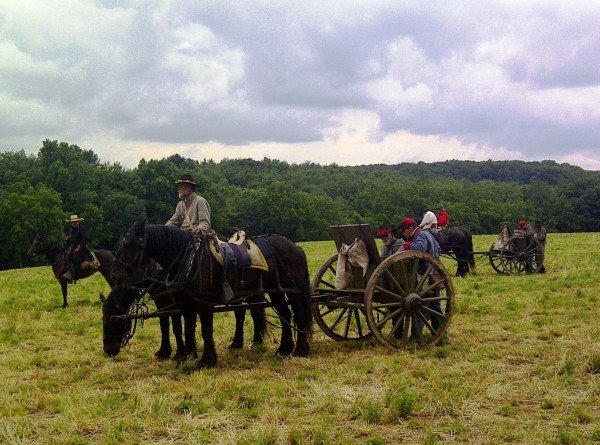 106. During the Gettysburg Campaign, Confederate Maj. Gen. Jubal Early brought 16 cannon into the vicinity of York, plus all the associated limbers, caissons, and ammunition and  support wagons. Lieutenant Colonel Hilary P. Jones commanded Early’s divisional artillery. He unlimbered four guns atop what is now Reservoir Hill (then called Shunk’s Hill) south of York and four more on Diehl’s Hill north of town. Four guns accompanied Brig. Gen. John B. Gordon’s expedition to the Susquehanna River on June 28-29 where Capt. William Tanner fired 40 rounds at the Union militia., while the remainder (James Carrington’s battery) remained in Camp Scott on the old York fairgrounds. Carrington reported that many York residents strolled to the camp to see the big guns, a common occurrence throughout south-central Pennsylvania in the days leading up to the battle of Gettysburg.

107. Several other pieces of Confederate artillery also rolled through York County, in this the case J.E.B. Stuart’s horse artillery. After fighting at the battle of Hanover, Capt. James Breathed led his guns toward Dover as part of Stuart’s ill-fated attempt to locate the flank of the Army of Northern Virginia. He had a pair of 3″ Ordnance Rifles of his own battery, as well as two more rifles and a pair of smoothbore 12-pounder Napoleons of McGregor’s 2nd Horse Artillery. Breathed would unlimber some of his guns on a ridge near Dover, threatening the town in case of any trouble while Stuart’s weary cavalrymen rested on the night of July 1 into the next morning.

108. The main Union force protecting York County in the days before the Confederate invasion in June 1863 was the 20th Pennsylvania Volunteer Militia. They had been hastily recruited in the greater Philadelphia region, and many were employed in the Corn Exchange (a type of early stock market for corn futures). Others were government workers such as postmasters, U.S. Mint employees, men from the Philadelphia Navy Yard, and others. Their commander, Col. William B. Thomas, was a wealthy miller and businessman from Montgomery County who was a strong financial backer of Abraham Lincoln’s 1860 election and an early organizer of the Republican Party in Pennsylvania. He established his headquarters in the National Hotel / Tremont House on W. Market Street. Thomas and his men focused their attention on protecting important military targets such as the bridges on the Northern Central Railway from York Haven south to Glen Rock.

109. In the fateful presidential election of 1860, Abraham Lincoln’s strongest support came from those townships in the extreme northern and eastern parts of York County. Newberry Township topped the list of Republican townships by casting a full 75% of its 393 votes for the Illinois rail splitter. By contrast, Codorus Township voted 94% against Lincoln and in Manheim Township only 2 of 176 voters cast selected Lincoln! Overall, Abe received only 43.6% of the vote countywide. No Republican would carry York County in any presidential election through the end of the 19th century despite largely dominating national politics of the era.

110. York boasted several well established schools and academies at the time of the Civil War. Several graduates from the York Academy (a forerunner to York College) went on military careers, including Maj. Granville O. Haller, the Regular Army officer from the 7th U.S. Infantry who commanded the defenses of Adams and York counties during the Gettysburg Campaign. Another prominent school was the Cottage Hill College, a girls school under the direction of Rev. John F. Hey. Founded in 1849, it stayed solvent for almost 30 years before closing.  Its 9-acre campus was off what is now Cottage Hill Road near Newberry Street north of Codorus Creek. Mary Cadwell came to the region because of the school; she later married Judge Robert Fisher and was a nurse at Gettysburg after the battle. 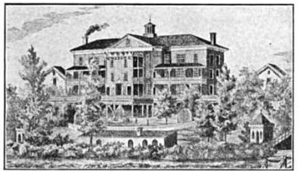 Cottage Hill College as shown in 1866

111. Members of certain religious organizations such as the Quakers as well as German Anabaptist groups such as the Dunkers, Amish, Mennonites, and others were exempt from serving in the military, but men of military age had to provide either a substitute soldier or exemption money. More than 150 men from York County, with a large percentage hailing from Heidelberg Township, successfully filed as objecting to the war on their “conscientious scruples.”

112. The first draft lottery in York County happened in October 1862. According to Dr. Mark Snell, 2,013 men were conscripted, but only 340 were mustered into the service. Another 341 were exempted, and 821 draftees furnished substitutes (often at a cost of between $200 and $1,000). A considerable number of draftees, 511 to be exact, skedaddled or hid to avoid the army. In one documented case, a merchant in Porter’s Sideling in southern York County hid in a cave (more likely an iron ore quarry) for months, leaving the store to his teenaged son to manage.

113. During the Maryland Campaign of 1862, Gov. Andrew Curtin of Pennsylvania called out the state’s emergency militia to help defend the borders in case Lee’s army continued northward from Maryland into the Keystone State. York County responded by raising six volunteer militia infantry companies, as well as a company of mounted cavalry and an artillery battery. They served from September 12-24, when they disbanded with Lee’s withdrawal across the Potomac River back into Virginia.

114. Response was more subdued to a similar call to arms in mid-June 1863 when Lee again threatened Pennsylvania. A single company was raised in Hanover; the volunteers formed the bulk of Company I of the 26th Pennsylvania Volunteer Militia. In York, not enough men were raised initially to fill an entire infantry company, and no cavalry or artillery signed up. It was the summer harvest season, and many men appear to have chosen to stay home with their crops rather than spend another fruitless two weeks as temporary soldiers as they had the previous September.

115. In November 1861, some of the leading women in York organized what became “The Ladies’ Soldiers’ Aid Society.” They made or went door to door collecting supplies for the soldiers such as knit stockings, shirts, reading material, food and home-cooked meals, bandages, etc. Some of the material ended up being sent to York County’s soldiers in field, while the rest went for the troops in Camp Scott (later re-designated as “Camp Franklin” for York’s native son Maj. Gen. William B. Franklin) or at the 6th New York Cavalry’s barracks on Penn Common. Later in the war they ministered to the patients in the U.S. Army Hospital.

116. In the fall of 1862, a 9-months regiment, the 166th Drafted Militia, was raised almost entirely from men selected in the draft or hired as substitutes. The men had the option, if drafted, to instead transfer to one of the 3-year regiments (which offered significant bounty money). However, most men at the time chose the shorter, less financially rewarding duty in the 166th and similar drafted militia regiments). Only six men in the 166th would eventually die in combat and eleven more perished from disease, a relatively small amount of each compared with some of the 3-year regiments.

117. Following Lincoln’s Emancipation, many in the North came to believe that the focus of the war effort had shifted from preserving the Union to freeing the slaves. Several editorials and articles in York County newspapers decried the shift in emphasis. With the proximity to slave-state Maryland and historic relationship in terms of business and culture, many York Countians, particularly in the southern portion of the county, were relatively ambivalent to the issue of slavery at first. When news arrived that the District of Columbia had abolished slavery, the York Gazette (a Democratic paper) on July 22, 1862, decried, “We can’t Believe it– It is Impossible.”

118. During the war years, rail travel could at times be dangerous. Some observers deemed the Hanover Branch Railroad as one of the roughest in the country. The Northern Central Railway, while boasting a smoother roadbed, had its own share of problems. In one incident in 1862, a cow wandered onto the tracks and caused a derailment, killing two passengers. Newspapers of the period and the annual reports of the NCWR also speak of other cow-train collisions, as well as locomotive explosions and train wrecks. In some cases these involved military personnel. In one instance, a New York soldier riding on top of an overcrowded railcar died when the train passed through a covered bridge near Hanover Junction and he struck the bridge’s superstructure.

119. After the Civil War, residents of south-central Pennsylvania could file border claims with the state for damages or losses incurred to the Confederates (similar claims could be filed with the Federal government if the perpetrators were Union soldiers). Political wrangling and state budget cuts eventually stalled this program, and few if any received any recompense. However, these documents are a gold mine to the researcher. They indicate that the Rebels took more than 1,000 horses out of York County and more than 60 mules, often trading their broken down nags for a fresh horse. Citizens often got creative in trying to hide their horses, secreting them in cellars, parlors, out-of-the-way ravines and hollows, thickets, hills, and woods. The Rebels often were equally adept at finding the hidden horses.

120. In one controversial case, a black man associated with the Confederate cavalry was particularly proficient at locating hidden horses in northwestern York County. For some reason, he stayed behind when the cavalrymen rode out of the region. Six irate farmers, including three Spahr brothers, discovered him along a road in Warrington Township and murdered the alleged horse thief. After the war, a grand jury failed to indict the men.