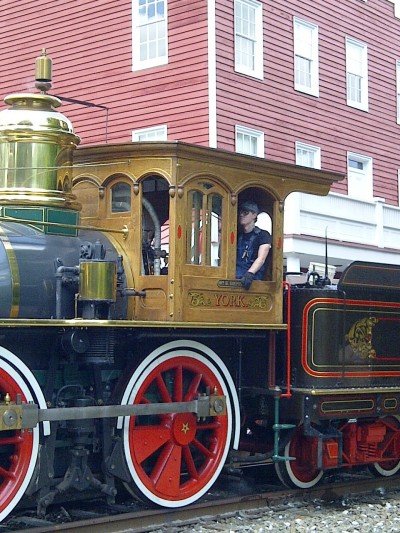 76. During the Gettysburg Campaign, Confederate cavalry raided the Northern Central Railway along its length from Hanover Junction to York Haven, burning or otherwise destroying more than two dozen bridges as well as severing telegraph lines and burning rolling stock. Major General Jubal Early threatened to burn railroad structures in York, but decided not to when it was pointed out that the fire could easily spread to nearby private homes.

77. Mary “Mammy” Ruggles was a matron at the U.S. Army Hospital on Penn Common during the war years.  When news arrived on June 28, 1863, that the Rebels were approaching York, the nurses and other women wrapped the flag around Mammy’s body, hiding it in the folds of her petticoat. She calmly walked down George Street with the flags safely hidden until she reached her son’s home near the Codorus Creek. In his fine book East of Gettysburg, modern historian Jim McClure added, “With each step, she said a prayer to save her flag from the Confederates who surrounded her.”

78. Cyrus Diller and his brother William of Hanover were instrumental in raising a company of soldiers from that region to serve in what became the 76th Pennsylvania Infantry. Three other brothers also were officers in the war, while their two youngest brothers were too young for the service. Amazingly all five Diller brothers survived the fighting. They are perhaps the only family in York County to send five boys off as officers in the war effort.

79. The battle of Antietam on September 17, 1862, was one of the first fights for the York Countians of the 130th Pennsylvania. They included at least one underage and undersized soldier, Edward W. Spangler, who back in August of that year had stretched his 5′ 2″ frame to his tiptoes to convince a recruiting officer that he was tall enough for the job. The minimum height at the time was 5′ 4″. He watched as several comrades fell wounded or dying, but served creditably and received an honorable discharge when his term of enlistment expired. He later was incapacitated as a U.S. marshal during the Gettysburg Campaign when a stray Confederate horse kicked him in the leg.

80. Confederate soldiers from McIntosh County, Georgia, learned on June 28 in York that black Union soldiers had torched their leading town, Darien, in a raid earlier that month. With anger burning in their heads, they nevertheless obeyed an order later that day to form a bucket brigade to transport water from the Susquehanna River and the nearby canal to save Wrightsville, Pa., when embers from the blazing Columbia Bridge threatened to lay waste to the riverfront town.

81. Unlike Jubal Early’s troops in June 1863, the first uniformed Confederates to visit York did not carry guns. They were a trio of prisoners of war seized by four members of the pro-Union Loudoun Rangers. The Rangers’ historian wrote, “These were the first “Johnnies” the citizens had seen, and, of course, they were a kind of curiosity. The Rangers were lionized for this heroic achievement and escorted to the hotel, where an ovation was given them, and a grand dinner which the boys enjoyed.”

82. Reports circulated in the early days of the Confederate campaign in Pennsylvania that the Rebels were seizing free-born blacks apparently with the intention of enslaving them. In Franklin County, several citizens managed to help free some of the captives, but others blacks were indeed carried away in what modern historian Ted Alexander has deemed “the great slave hunt.” Hearing the news from refugees, most of the blacks in Adams and York counties fled across the Susquehanna. However, one account suggests that when the Rebels came to York, they located and took a black lad into custody. He reportedly was last seen in the infamous Castle Thunder prison in Richmond.

83. Lincoln assassin John Wilkes Booth had ties to York County, having attended Bland’s boarding school on Prospect Street in York for a brief time in 1853. Booth hailed from Bel Air, Maryland, which was less than 20 miles south of York County.

84. Some accounts suggest that Booth met Edman “Ned” Spangler at the school; the York native held Booth’s horse after the assassination at Ford’s Theater. He would be convicted of being a conspirator to the murder plot and sentenced to six years in prison, a term later shortened when President Andrew Johnson pardoned Spangler.

85. After the war, many of York County’s former soldiers joined veterans organizations such as the Grand Old Army. These “camps” or “posts” often met to remember fallen comrades and to socialize, and over time some of these groups erected their own G.A.R. Halls. The main camp in downtown York was Post #37, named in memory of Union General John Sedgwick, the commander of the Sixth Corps at Gettysburg and in the Overland Campaign. He famously died from a sharpshooter’s bullet shortly after dismissing the danger with the sneer, “They couldn’t hit an elephant at this distance.” They could.

87. One of the deadliest battles of the Civil War for York County’s soldiers was the fight at Fort Stedman in April 1865 during the last days of the Siege of Petersburg. Among the dead was Zachariah Shepp of Manchester Township, a soldier in the 200th Pennsylvania. His widow soon had another tragedy when their daughter perished just three years later.

88. The fighting at Wrightsville on June 28, 1863, had a tragic outcome for at least three individuals. A black volunteer fighting in the trenches in civilian clothes died when a shell fragment decapitated him, and two Shenberger children later died near East Prospect. They were playing with a live shell which their father had found near Wrightsville and brought home. It rolled into the kitchen fireplace and exploded, mortally injuring the unsuspecting kids.

89. York’s police chief also perished as a result of the Gettysburg Campaign, but under much different circumstances. He had helped police the battlefield after the armies departed and contracted a disease, from which he expired. Other citizens of Adams and York counties are also known to have died from illnesses contracted while visiting the battlefield or field hospitals.

90. A convention of Peace Democrats (sometimes derisively deemed as “Copperheads”) took place in downtown York in September 1863, just a few months after the Rebels had left. They drafted a series of strongly worded resolutions airing their grievances against President Lincoln.