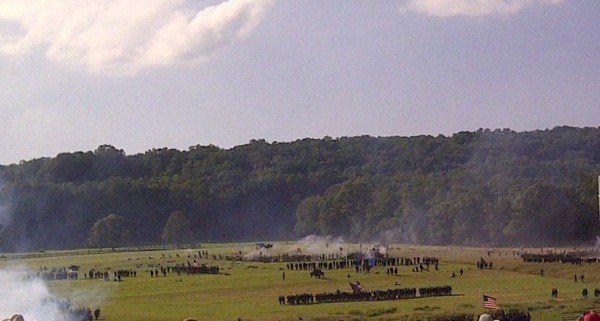 61. The artillery bombardment preceding Pickett’s Charge could be heard in most of York County, as could many of the earlier cannonades. Several written records exist. A group of boys wandered along the banks of the Codorus Creek near Laurel Rocks and Indian Steps. These were popular swimming holes. But the fighting raging 30 miles away in Gettysburg disturbed the normal solitude. “At these points,” Martin Luther Van Baman remembered years later, “the rattle of musketry and booming of cannon during the engagement could be distinctly heard.”

62. Prominent businessman Josiah W. Gitt inadvertently played a role in the June 30, 1863, Battle of Hanover. Some of the earliest fighting occurred in the vicinity of his grist mill outside of town, and later that day, according to tradition newly promoted Brig. Gen. George Armstrong Custer galloped into the town square and tied his horse to a silver maple which stood in front of Gitt’s red brick residence.

63. Two rifled cannon sit on the town square in Hanover. Their muzzles are marked 1 and 6, and some accounts suggest they are early prototypes of Parrott rifles. However, the bores are out of round and there are no military stampings which typically would have been used to verify inspections. Their actual origin remains somewhat uncertain, but they are excellent conversation pieces.

64. Four more gun tubes can be seen at Hanover Junction. These 3″ Rifles once surrounded the Civil War Soldiers Monument in Penn Park in downtown York, but were removed years ago and placed into storage. Efforts by the local camp of the Sons of Union Veterans led to their restoration and movement to Hanover Junction.

65. Additional gun tubes can be found in other places in the county, such as the memorial along Hellam Street in Wrightsville commemorating that town as the “farthest east” reached by Robert E. Lee’s Army of Northern Virginia in the Gettysburg Campaign.

66. A Civil War marker at the fire hall on Canal Street in Dover commemorates J.E.B. Stuart’s ride through the area on July 1, 1863, en route to Dillsburg and Carlisle. Stuart’s three brigades of cavalry and his artillery camped overnight around Dover.

67. York businessman A. B. Farquhar twice negotiated on Saturday, June 27, 1863, with the oncoming Confederates prior to their occupation of York. Threatened with hanging if he revealed too much information about the Rebel strength, Farquhar later was deemed as a traitor and Southern sympathizer, despite voting for Lincoln. He visited Gettysburg during the battle and met with Union General H. Judson Kilpatrick and later arranged for medical supplies and coffins to be sent to the town. In August he visited President Lincoln in Washington, who teased that Farquhar was “the chap who sold York, Pennsylvania, to the Rebels” before commending him for his actions. Secretary of War Stanton admired Farquhar and encouraged him to enlist as an officer.

68. A company of volunteers from Hanover and southwestern Pennsylvania participated in skirmishing at Gettysburg on June 26, 1863, the week before the Battle of Gettysburg. They were part of the 26th Pennsylvania Emergency Militia, a unit hastily organized and scarcely drilled which was sent via rail back through Hanover to Gettysburg to delay the Rebels. Several Hanoverians returned to Gettysburg in 1892 for the dedication ceremony of a monument to the regiment.

69. Patients in the U.S. Army Hospital on Penn Common in York wrote a series of resolutions to President Lincoln in early April 1863 denouncing the “corrupt and unscrupulous politicians” who were stirring up trouble and trying to divide the soldiers in sentiment.  They reaffirmed their commitment to the Union cause and their support for the general course of the war (this of course was before Chancellorsville and Gettysburg, and came at a time when many in the North questioned Lincoln’s policies after the failure at Fredericksburg and lack of progress in other fronts).

70. In the 1864 presidential election, incumbent Abraham Lincoln lost York County by a wider margin than in 1860. Weariness of the war, displeasure with the government’s policies, and the 1863 Confederate invasion were contributing factors to the surge in votes for Peace Democrat Maj. Gen. George B. McClellan. Interestingly, the army vote of soldiers from York County went overwhelmingly to the president.

71. York County residents filed more than 700 damage claims after the Civil War citing losses from the Confederate invaders, Union defenders, or both. More than 1,000 horses and almost 60 mules were reported taken by the Rebels, and such diverse personal property as ladies’ bonnets and a buffalo robe.

72. Confederate Maj. Gen. Jubal A. Early entered York County from the west on the late afternoon of Saturday, June 27, 1863, and camped near Big Mount. The following day he led his force of some 4,000 men (Gordon’s brigade and White’s cavalry being separate at the time from the main body) up Canal Road to Davidsburg Road, where they turned toward Weiglestown. Early supposedly spotted a resident sitting on a fence reading a newspaper. The Virginia general snatched the paper from the startled civilian and exclaimed, “That’s  what I need!”

73. Among Early’s officers were several future prominent Southern political leaders. Brigadier General John B. Gordon and Col. James Milton Smith would later both be governors of Georgia. Brigadier General William “Extra Billy” Smith was the governor-elect of Virginia as his men came into York County; he had been the governor previously during the Mexican War as well as a five-term U.S. congressman.

74. The famed (and much feared) Louisiana Tigers, which marched into York County with Early, camped where the Harley Davidson factory now is located. Unlike the popular misconception, they did not wear blue striped pants and French-style uniforms this late in the war, nor did the majority speak Cajun or Creole. They instead were a polyglot of nationalities ranging from Scandinavian to German to English, with the most prominent group being Irish. The Tigers reflected the diverse nature of Louisiana’s citizenry, many of whom were immigrants who had landed in New Orleans. A few were Northerners, including some Pennsylvanians who were returning to their home state in Robert E. Lee’s invading army.