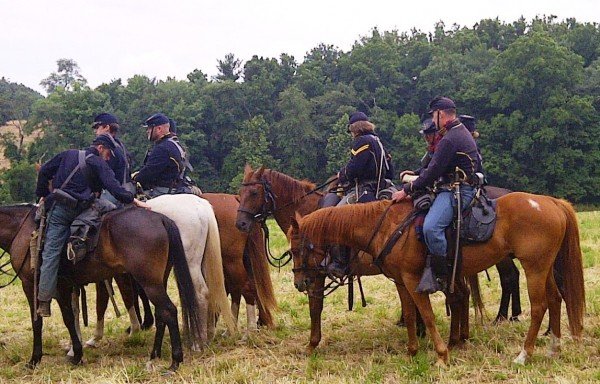 46. As the Battle of Gettysburg raged in Adams County on July 1, 1863, tens of thousands of Union soldiers were still on the road heading for the engagement. Some of them passed through York County, including Gen. David M. Gregg’s division of Federal cavalry. The marched to Hanover Junction, started for York, and then countermarched back toward Maryland and Hanover. They would be the last major Union cavalry force to pass through York County in the Gettysburg Campaign.

47. At least two women were telegraphers in York County during the Civil War, according to 19th century historian George Prowell. Mrs. W. F. Busser was ab operator for the Northern Central Railway at York in 1865. Near the close of the war, she received General U. S. Grant’s dispatch which was sent over all the wires of the North, announcing the fall of Richmond and its evacuation by the Confederates under General Lee. For a time, a lady named Mary Harris operated the telegraph at Hanover.

48. York County also had another rarity in the Civil War years, a female-owned and operated newspaper. Following the death of her husband Seneca, Maria Leader took over the Hanover Spectator. Her daughter Mary was a prominent reporter for the paper, and some accounts suggest she covered the dedication ceremonies for the National Cemetery in November 1863, an occurrence marked by Lincoln’s Gettysburg Address.

49. Another woman of note in the war was Mary Jane Rewalt. The daughter of the chief burgess of Wrightsville, she was a newlywed in the spring of 1863. As Confederates threatened to cross the Columbia Bridge on Sunday evening, June 28, Union officials ordered four civilian volunteers from Columbia to burn the span. Flaming embers soon caught Wrightsville on fire, and Rebel soldiers labored for hours to save the town by passing water from the river and nearby canal. Mrs. Rewalt offered Gen. John Gordon and his staff breakfast to say thanks. He suspected she may have been a Southern sympathizer, but she made a bold speech stating her Union loyalties. An admiring Gordon deemed her “the heroine of the Susquehanna.”

50. Jacob G. Lauman, a York native and graduate of the York Academy (a forerunner to York College) moved to Iowa in 1844. During the Civil War he rose to the rank of brigadier general and fought at the bloody battle of Shiloh. A year later he was relieved of duty as a division commander in the Siege of Vicksburg for “wanton disregard of orders,” which resulted in massive casualties among his men. He tried for years to clear his name, blaming the issue on a misunderstanding.

51. Twice during the war years veteran politicians A. J. Glossbrenner and Joseph Bailey battled for the congressional seat which encompassed York County, with each man winning once. Glossbrenner, a York resident, was a Peace Democrat while Bailey, although also a Democrat, supported President Lincoln’s war efforts.

52. York County’s last living veteran of the Revolutionary War, John Pennel, died during the Civil War at the age of 98 or 99 (accounts vary). He had once sailed under famed Admiral John Paul Jones.

53. York County had at least two semi-permanent Union army camps during the war. The larger one, Camp Scott, was located on the old fairgrounds near the intersection of King and Queen streets. A satellite campsite  south of Shrewsbury was manned occasionally to help guard the railroad. It was located on an old Methodist campground.

54. The 6th New York Cavalry established a temporary camp on Penn Common (now Penn Park) in the winter of 1861-62 before leaving for Virginia in late March. Their barracks would remain empty only a short time as by summer the army had established a 2,000-bed hospital on the site. Trainloads of wounded arrived from the Peninsula Campaign and then in the fall after Antietam.

55. North of the Accomac Inn along River Road sits a solitary gravestone marking in the reported final resting place of a Confederate soldier who died during the Gettysburg Campaign. Most accounts suggest he drowned while crossing the rain-swollen Susquehanna River and may have been a scout or a deserter. His identity remains an uncertainty, although it is most likely he was from either the 17th Virginia Cavalry or the 35th Battalion, Virginia Cavalry, both of which had patrols operating along the river in late June 1863.

57. Famed Confederate General J.E.B. Stuart after leaving the Battle of Hanover held a council of war on the evening of June 30, 1863, in either a tavern or a farmhouse owned by John E. Ziegler near Hanover Junction. Stuart made the fateful decision to press toward Dover (and later on to Carlisle), thus taking him north while the Jubal Early’s infantry division marched westward, preventing a rendezvous.

58. Earlier that day, Stuart had a close call at Hanover when he found himself and his aide W. W. Blackford isolated near the oncoming Union cavalry. Hastily withdrawing toward their lines, Stuart and Blackford leaped their horses over a deep 15-foot-wide ditch to safety, a jump their pursuers could not make with their army-issued mounts.

59. Among the more than 300 victims of the Battle of Hanover was an Ohio man named Henry Holman who had been a clown with a traveling circus before the war.

60. More than 11,000 wounded soldiers from the Battle of Gettysburg were evacuated via rail through York County. Often they paused at Hanover Junction to await trains on the Northern Central. Delegates from the U.S. Sanitary Commission arrived and set up aid stations to give nourishment and drinks to the wounded men.