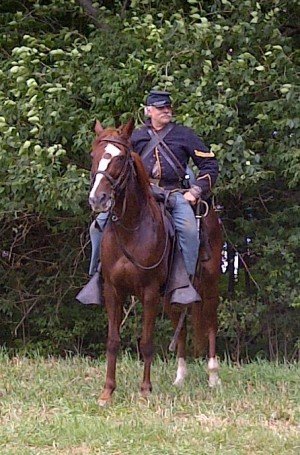 136. As the terms of enlistment expired for York County’s soldiers throughout the war, regiments or companies returned home. Often these homecomings were accompanied by parades, feasts, speeches, and/or other celebrations. One such instance was the return of the 130th Pennsylvania in May 1863. The regiment had been recruited back in the late summer of 1862 and had early on in their services fought hard at the Battle of Antietam. As the soldiers disembarked from their train at York’s depot, church bells rang joyously throughout York. The men formed into march column and headed through flag-draped streets for the army barracks at Camp Franklin (formerly Camp Scott). The Patapsco Guards from the Army Hospital led the parade, which including the Freemasons lodge members, Odd Fellows, the local fire departments, and a “large number of citizens.” Then it was time to enjoy a meal provided by the Ladies Aid Society.

137. One oft-forgotten part of the Confederate invasion of York County in June 1863 was an incursion into the northwestern townships on June 27-28, 1863, by Maj. James H. Nounnan and a battalion of the 16th Virginia Cavalry. They arrived in Dillsburg, took horses in the region, camped overnight in Carroll Township, and then rode down to Dover. They are known to have raided stores in the Rossville area, taking massive amounts of merchandise, supplies, and forage, as well as for good measure leading away the shopkeepers’ horses. The cavaliers finally rode northwest out of the county to rejoin the bulk of their brigade.

138. Several prominent future politicians and civic leaders passed through York County in the ranks of the opposing military forces. They included the governor of Virginia during the Mexican War, 65-year-old William “Extra Billy” Smith, who was the governor-elect in June 1863 when his almost 1,000 soldiers camped along N. George Street north of York. Another future governor of Virginia fought at Hanover — Fitzhugh Lee (Robert E. Lee’s nephew). Col. Russell A. Alger of the 5th Michigan Cavalry fought at Hanover; he would govern the Wolverine State from 1885-1887. Two future governors of Georgia tramped through York borough — John B. Gordon and Col. James Milton Smith.  Samuel Pennypacker trudged through Dillsburg as the 26th Pa. Volunteer Militia retreated from Gettysburg; he would be governor of Pennsylvania late in the century.

139. During the Gettysburg Campaign, hundreds of residents of southern York County took their horses and wagons to Cross Keys, assuming that the Rebels were unlikely to venture that deep into the southeastern region. They were correct; they were later able to return safely to their homes and farms.

140. Dr. Henry Palmer, the surgeon in charge of York’s U. S. Army Hospital, was noted for running a safe and well regarded facility. A pair of gazebos helped promote health by encouraging ill or wounded soldiers to get fresh air, and Palmer encouraged his patients to regularly exercise. Regular military drills were held, and the patients started a newspaper (the Cartridge Box), as well as participating in other regular activities meant to help them pass the time and keep their mental and physical conditions as sharp as possible. However, Dr. Palmer suffered a personal tragedy when his own daughter fell ill. Despite his skills, he was unable to save 5-year-old Kittie. She was buried in York’s Prospect Hill Cemetery.

141. York, being located on the turnpike between Philadelphia and Pittsburgh, boasted a number of hotels and inns for the weary or hungry traveler. Among the leading establishments were the National House (praised before the war by English novelist Charles Dickens) and the Metzel Hotel (where general Jubal Early stayed during his occupation of York in late June 1863). Confederate sympathizers reportedly waved handkerchiefs from the National’s imposing balconies at Early’s passing Rebel soldiers.

142. General Early and several of his staff and brigade commanders dined on June 3o in Davidsburg in western Dover Township. Supposedly they could hear the distant artillery from the Battle of Hanover. The innkeeper, William Julius, received Confederate money for his trouble in preparing the food. For some reason, Early failed to send out scouting patrols to investigate the source of the cannonade, and his powerful infantry did not march to the sound of the guns.

143. Several Confederates are known to have deserted from the army while they were in York County. Union cavalry patrols rounded up most of these men, but a few managed to escape or avoid detection. A handful stayed in York County, married local girls, and raised families. In some cases their descendants still live in the region.

145. At least one York citizen, a long-time farmer in western Hellam Township, committed suicide in the months after the Rebels left. While his exact motivation is open for conjecture, it seems likely that the loss of his horses and the resultant financial burden from not having a summer harvest, weighed heavily on his mind.

146. York watercolorist Lewis Miller captured scores of images of antebellum York as well as a handful from the Civil War. His colorful sketch of Confederate generals Early and Gordon parading into York’s center square is one of the few contemporary drawings of the Confederates entering a Northern town. He also drew images of York’s early war recruits preparing to leave via train for the South, as well as of the battle of Hanover and of the lowering of York’s flag to the Rebels.

147. The pastor of York’s Moravian Church, S. Morgan Smith, had pastored a church in North Carolina before the war. In June 1863, Confederates from his old church occupied the beds of the Army Hospital. Reverend Smith had a chance to renew old acquaintances. A year later, he was the chaplain of the 200th Pennsylvania Infantry. Later famed as an industrialist after throat issues caused him to give up the vestry, Smith died on Easter Sunday in 1903. His widow donated a beautiful stained glass window in Smith’s memory.

148. Many York County soldiers marched in downtown Washington in the late spring of 1865 during the “Grand Review of the Armies.” They paraded through the streets past a reviewing stand with General U. S. Grant, President Andrew Johnson, and other dignitaries.

149. With the close of the war in the spring of 1865, the Army decided to decommission its hospital on Penn Common. Usable wooden boards and other structural elements were sold off to the public. Within 20 years, local residents had erected on the old hospital grounds a large, impressive monument to the Civil War soldiers from the county.

150. Despite the Confederate invasion and all of the ensuing damages, the spirit of York’s people largely remained unbroken. Some went out west or relocated elsewhere, but the majority stayed put, helping stabilize the local economy. Veterans groups abounded, and many old soldiers were free to spin the war and its causes in their own words. Well into the 20th century, the number of citizens who lived through the war years dwindled. York resident Cassandra Small deemed the Civil War as “a time never to be forgotten.” It is up to us, now in the 21st century, to keep their stories alive for another generation so that Miss Small’s comment might still ring true.