Delta residents organized Sons of Veterans camp after the war 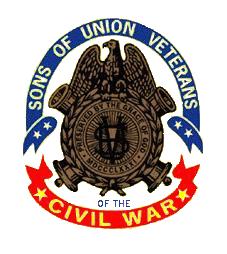 The Sons of Union Veterans of the Civil War (SUVCW) is a longstanding fraternal order whose membership consists of direct descendants of Union soldiers who served in the Civil War. It is the legal successor to the old Grand Army of the Republic, the national organization for veterans of the Civil War. The Sons organization was founded in Pittsburgh in 1881, sixteen years after the war ended, at the direction of Major Augustus P. Davis. He was a former officer in the Union Army of the James, which served in Virginia.

Davis envisioned an organization that would provided martial training for young men aged 14 and above. He believed this would foster patriotism and instill discipline in the youth. He further thought the government could call up this trained military reserve in time of war. As it turned out, the group evolved into a social and fraternal group that sought to keep alive the memory of their fathers’ (and later, their ancestors’) Civil War service, honor the dead and fallen on Memorial Day, educate the public about the war, offer charity to veterans and their families, and similar outreach activities.

Over time, several other descendants groups, including a Philadelphia-based group called the Sons of Veterans, merged int0 what became the SUVCW, which at its peak in 1904 boasted some 200,000 members. It maintained a strong, though independent, relationship with the Grand Army of the Republic, the main veterans group.

Today, the national SUVCW organization remains in place, albeit much smaller with some 6,000 male members. An local chapter in York County, Captain Edgar M. Ruhl Camp #33, continues to march in parades, supervise various charitable and educational activities, place flags on veterans graves, and perpetuate the memory of the Civil War. They were also instrumental in saving and restoring four vintage artillery tubes that once surrounded the Civil War memorial in Penn Park. Those historic tubes, one of which was used in the battle of Gettysburg, are now in Hanover Junction.

At one time, York County had several sons of veterans camps, including a camp of the Sons of Veterans in Delta. It was a local offshoot of the Philadelphia group. 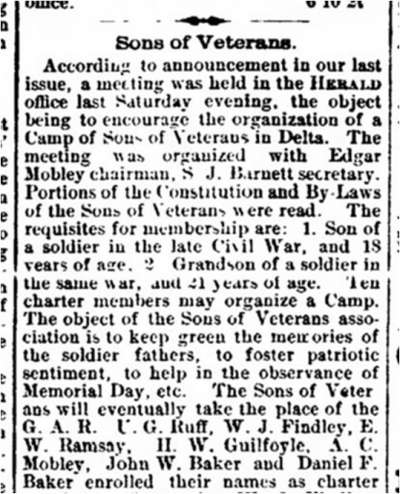 “According to the announcement in our last issue, a meeting was held in the HERALD office last Saturday evening, the object being to encourage the organization of a Camp of Sons of Veterans in Delta. The meeting was organized with Edgar Mobley chairman, S. J. Barnett secretary. Portions of the Constitution and By Laws of the Sons of Veterans were read. The requisites for membership are: 1. Son of a soldier in the late Civil War, and 18 years of age. 2. Grandson of a soldier in the same war, and 21 years of age. Ten charter members may organize a Camp. The object of the Sons of Veterans assocation is to keep green the memories of the soldier fathers, to foster patriotic sentiment, to help in the observance of Memorial Day, etc. The Sons of Veterans will eventually take the place of the G. A. R. U. G. Ruff, W. J. Findley, E. W. Ramsay, H. W. Guilfoyle, A. C. Mobley, John W. Baker and Daniel F. Baker enrolled their names as charter members. On motion W. J. Findley, Daniel F. Baker, A. Cooper Mobley and H. W. Guilfoyle were appointed a recruiting committee, to report at the next meeting.

“A number of sons under 18 years of age were also in attendance, and were quite disappointed that they could not be enrolled. Several members of the G. A. R. were present to lend their encouragement to the movement.

“Adjourned to meet at the HERALD office Thursday evening, June 16.”

If you want more information on today’s SUVCW organization and its local camp, please visit the website of the Pennsylvania Division or send an email to Ivan Frantz, Jr. at musictrains@juno.com.