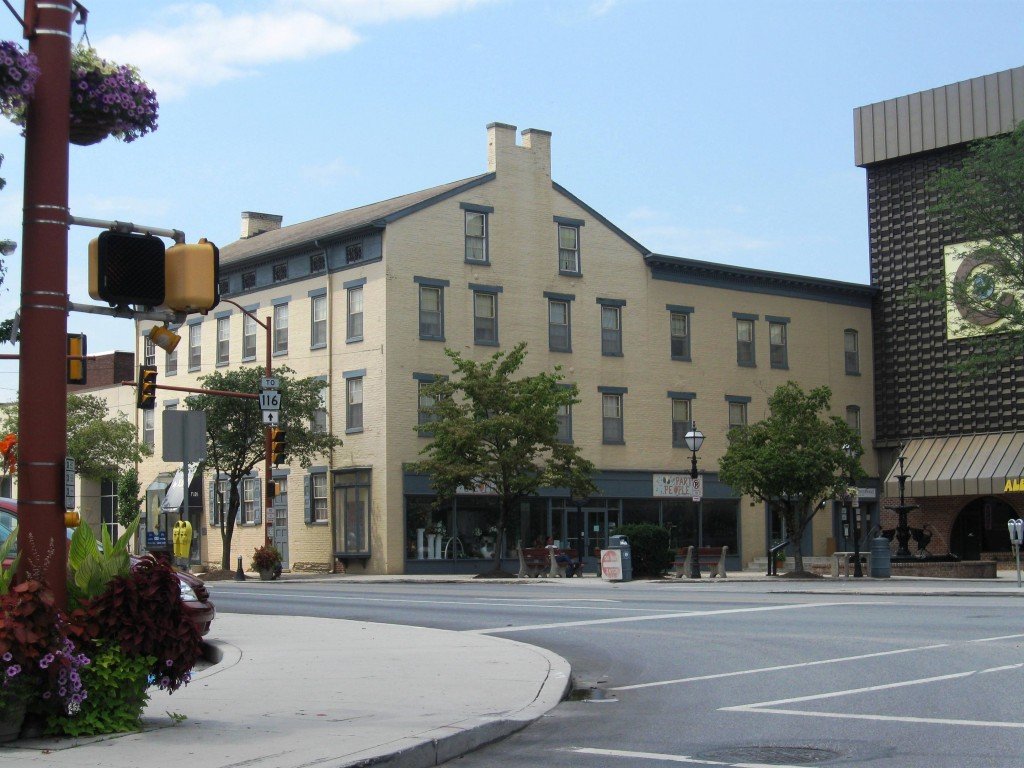 The Central Hotel in downtown Hanover, Pennsylvania, was a popular stopping place through much of the 19th century. The old building remains in use today, although not as an inn.

Thousands of Union soldiers of the Fifth Corps of the Army of the Potomac camped outside of Hanover on the night of July 1, 1863. They were en route to Gettysburg, where a battle had raged all day with elements of the Confederate Army of Northern Virginia. The First and Eleventh Corps were engaged, and the remainder of General George G. Meade’s Federal army hustled to join their comrades.

Quartermaster Daniel G. Macnamara of the 9th Massachusetts left a brief account of his regiment’s stay in southwestern York County.

“July 1, 1863, crossed Mason and Dixon line into the State of Pennsylvania. The farmers and countrymen hanging on the fences along our line of march gazed at our ranks in open-mouthed silence. Here and there we received a word of welcome, and grins of satisfaction were visible as they viewed our seemingly interminable columns of infantry. The feeling no doubt entered the souls of these good-natured non-combatants, as they gazed on our tanned and dusty veterans, that the country was safe, and in a short time it would be “all up” with “Lee’s invaders.”

In the afternoon we marched into Hanover, a borough of about 2000 inhabitants, the people receiving us with many welcomes. News from the inhabitants — verified by the dead horses lying about—informed us of the lively cavalry skirmishes that had taken place in this section of the country, between Kilpatrick and Stuart on the 29th. The latter was severely punished, and forced to retire after a short and sharp encounter.

During our march to this place we could hear at times the booming of cannon indistinctly. As we halted outside Hanover it was uncertain how long we should rest. The detonations from rapid-firing artillery could be plainly heard; to our practiced ears it told of a desperate battle going on a dozen miles away. The effect of the sounds of battle on our men was almost magical. All thoughts of their long marches seemed to vanish; they were lively and talkative and conjecturing on the sounds and rumors of the distant engagement. The excitement of it set the young, hot blood coursing through their hearts with a livelier beat than usual. That tired feeling was all gone, and each man seemed possessed of sleepless activity. We were under orders to be ready to move at a moment’s notice. Eight o’clock P.m. found us on the road to the battlefield.”