The first day of the battle of Gettysburg has long been of special interest to me. I wrote my final research paper in my Civil War history class at Miami University (Oxford, Ohio) on the Iron Brigade at Gettysburg in a class taught by Dr. John Eicher. I received an A on that test, and have enjoyed reading about the westerners and their exploits ever since. More recently, I spent a lot of time researching the role of the Louisiana Tigers on July 1 for a book that LSU Press published a few years ago. Walking the fields extensively gave me a new appreciation for the actions of Day 1, which are often overshadowed by the better-known combat on July 2 and July 3.

I have read most of the major books on Day 1 multiple times over the years. Some are really good; others perpetuate the common myths (shoes, snipers, etc.). David Martin’s classic book has long been my favorite study of the first actions at Gettysburg, but it can be intimidating for someone looking for a briefer, more concise overview without all the minute details that I like.

For folks who just want to get a good overview of what transpired in the fields and woods west and north of Gettysburg on July 1, 1863, here is a new option to consider. It does not go into the depth of Martin, nor is it intended to do so. The author accomplishes his goal of presenting a general summary of the actions of Reynolds, Howard, Doubleday, etc. and the men that opposed the First and Eleventh Corps on that fateful Wednesday so long ago. 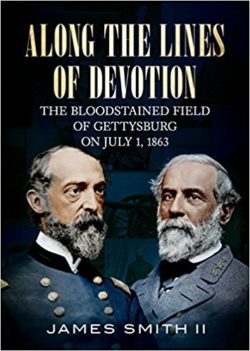 James Smith II has published a new study titled Along the Lines of Devotion: The Bloodstained Field of Gettysburg on July 1, 1863. The writer does a good job of setting up the fighting, taking the first 35 or so pages of the narrative to discuss the campaign, the fighting at Brandy Station and Second Winchester, the twin marches to the Susquehanna, etc. Anyone who spends more than a paragraph on Second Winchester and Jubal Early’s occupation of York County is off to a good start in my biased view, having written my own popular books on these sideshows to the main action.

There are some minor annoyances right off the bat, however, with this new book, most notably the copy editor’s insistence of misspelling Pennsylvania Governor Andrew G. Curtin as Governor Curtain. The author had it correct in the manuscript, but the publisher, Fonthill, being based in Great Britain, used their own local conventions. Hence, we have further for farther on multiple occasions, Curtain for Curtin, etc.

Mr. Smith, one of the “young guns” of the relatively new writers who are tackling Civil War topics, devotes a higher percentage of his book to the actions of the First Corps than the Eleventh Corps, as do most authors of the Day 1 actions, but that’s where the popular media has driven our thinking thanks to the movie Gettysburg and books such as Morning at Willoughby Run and others that totally skip the crucial actions on the Broad Open Plain and Blocher’s Knoll north of town. Smith gives a sweeping overview of that action in a chapter that he calls The Eleventh Corps Collapse, and he nicely ties together the tactical implications of that fight and the embattled First Corps to their west and southwest.

To his credit, Smith does not dive into the myth of Tennessee or Alabama sharpshooters up in trees in McPherson’s Woods targeting a Union major general on horseback, or Harry Heth bringing along his entire complement of artillery merely to search for a non-existent shoe factory. He sticks to the military situation and the tactical movements that marked the often swirling fighting on the first day at Gettysburg.

Smith’s prose is often compelling and vivid. Illustrative, here is a passage from his concluding chapter: “After the first day, both armies had already taken on a different look. Huge losses, on both sides, would forever stagger the ranks, exposing the troops to the horrors of what had happened and what was yet to happen, and yet each one of them possessing as much courage as the next to stand in line of battle against a foe that only had one purpose — to destroy them.”

The worst was yet to come.