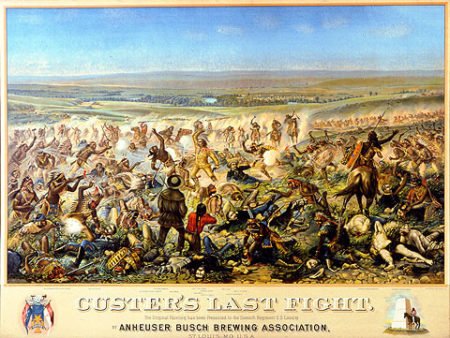 F. Otto Becker’s colorful 1896 lithograph of “Custer’s Last Stand” was widely distributed at the turn of the century at saloons and bars across America by the Anheuser-Busch Company as a promotional giveaway. Copies may still be found occasionally in flea markets and on eBay.

June 25, 2011, marks the 135th anniversary of the Battle of Little Bighorn, a fight forever known to history as “Custer’s Last Stand.” Enigmatic army officer George Armstrong Custer and more than 260 of his troopers of the 7th U.S. Cavalry would be dead by nightfall, slain by a force predominantly of Sioux and Cheyenne warriors. The debacle sparked a flurry of official military inquiries and proceedings, with blame cast variously upon Custer and/or two of his senior subordinates, Maj. Marcus Reno and Capt. Frederick Benteen.

All three were veteran officers, having served in the Union army during the American Civil War, as were many of the company commanders, including Capt. Thomas W. Custer, a two-time Medal of Honor recipient.

George Custer’s Civil War service included a brief stay in York County, Pennsylvania, where he first took the field in combat as a newly appointed brigadier general. That was the June 30, 1863, Battle of Hanover in the extreme southwestern part of the county.

Thirteen years later, he was dead on a wind-swept plain so far away from the scenes of his early success as a Civil War general.

On June 28, 1863, while in northern Maryland, Custer received word that Gen. Alfred Pleasonton had promoted him to brigadier general and assigned him command of a brigade of Michigan cavalry. Custer assumed command and led his men into action two days later in fields immediately south of Hanover, Pennsylvania.

Marker to Union general George Armstrong Custer on the wall of the current building that stands on the property where Josiah W. Gitt lived in 1863.

Custer used the comfortable brick home of Hanover businessman J. W. Gitt as his headquarters for portions of the Battle of Hanover and afterward. The site is now a bank, but a memorial marker recalls the time when the famed “Boy General” was in York County. In the 1850s, Gitt had planted a silver maple tree in front of his residence. During the Battle of Hanover, Custer used the tree was used as a hitching post by tying his horse to the trunk. The tree later became known as the “Custer Maple,” and a marker today commemorates the event.

The location of J. W. Gitt’s silver maple is marked by a star and four horseshoes in the sidewalk along the southeastern corner of Hanover’s Center Square.

One of Custer’s men who survived the 1876 Battle of Little Bighorn was a York County native, born several miles from Hanover. Click here to read his story.