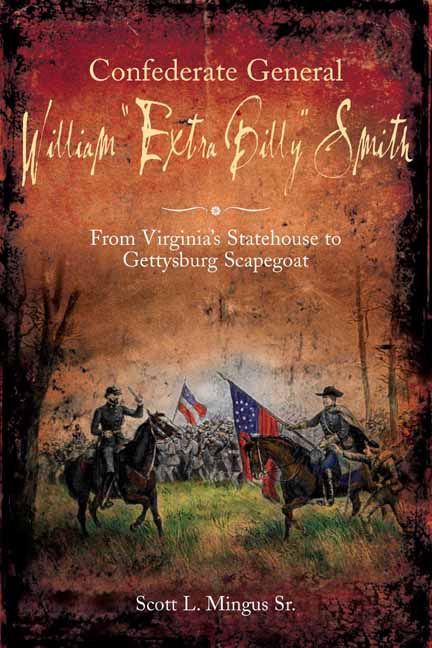 Savas Beatie LLC will have this new book out in print later this year. If you would like to be included in the pre-order list, send me an e-mail to scottmingusATyahooDOTcom.

Confederate Brigadier General William “Extra Billy” Smith commanded one of four Rebel infantry brigades that marched into York County, Pennsylvania, during the 1863 Gettysburg Campaign. I have previously written books on two of these brigades, those of Brig. Gen. John B. Gordon (Flames Beyond Gettysburg) and Harry T. Hays (The Louisiana Tigers in the Gettysburg Campaign). I have no plans to write a book on the fourth brigade, that of Col. I. E. Avery. Instead I have been helping a friend in North Carolina with the Gettysburg Campaign chapter in his manuscript on the brigade’s activities during the entire war.

Smith was the oldest Confederate general at the Battle of Gettysburg. He was also the governor-elect of Virginia, having previously served in that role during the Mexican War.

This new biography covers his life, with a twin focus on his political career and his military service.