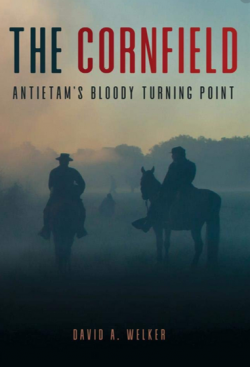 Civil War aficionados will recognize these places as landmarks of the Civil War battle of Antietam, fought near Sharpsburg, Maryland, on September 17, 1862. More Americans (22,000) fell in combat that day, most before noon, in what remains the bloodiest single day in the United States’ military history. Several were York Countians fighting in the 130th Pennsylvania Infantry regiment.

Farmer David R. Miller’s heretofore nondescript 24-acre cornfield, a half-mile north of Sharpsburg, was one of the worst killing fields in the long bitter day of death and destruction.

In many ways, the morning fighting among the carefully cultivated cornstalks epitomizes Antietam as a whole. Disjointed and unsupported attacks. Individual valor. General lack of cohesion. Retreat. Start the process over.

Author David A. Welker, whose work I have long admired, has published a new book focusing on Miller’s tract of land and the terrible events that he nor his family could have foreseen before that fateful September morn. Titled The Cornfield: Antietam’ Bloody Turning Point, this new book is simply one of the most detailed accounts ever written by a non-participant.

Drawing heavily on first-person accounts and military records, and supported by two dozen accurate and well-crafted maps, Welker’s book is a welcome addition to the historiography of the battle Southerners called Sharpsburg for the nearest town and Northerners called Antietam for the most prominent geographic feature.

The prose is crisp and lucid, and Welker does a nice job of keeping the text flowing without bogging the reader down in what was a complex and fast-changing tactical situation.

By noon on September 17, most of D. R. Miller’s cornstalks had been cut down by bullets and artillery shell fragments or had been crushed beneath the brogans of thousands of infantrymen. It was a harvest of death, one that would forever link Miller’s name to the battle of Antietam. Welker paints a vivid and compelling word picture of the swirling action.

Heavily annotated with endnotes, this fine work stands out as one of the best new books on Antietam in the past decade. Welker has two main contentions: 1) Major General George B. McClellan was fixated in his “linear thinking” early on in the battle in clearing the Rebels from the cornfield and 2) “the repeated failure by the generals McClellan charged with fulfilling this task created a self-reinforcing cycle of disaster that doomed the Union’s prospects for success.” As a result, thousands of men died.

Welker, like any good author of history, leaves the reader yearning to explore his conclusions further through personal research and additional reading of primary source materials. Stirring interest in the topic is the goal of any writer and, in this effort, David has admirably succeeded.