Confederates camped around York before the battle of Gettysburg 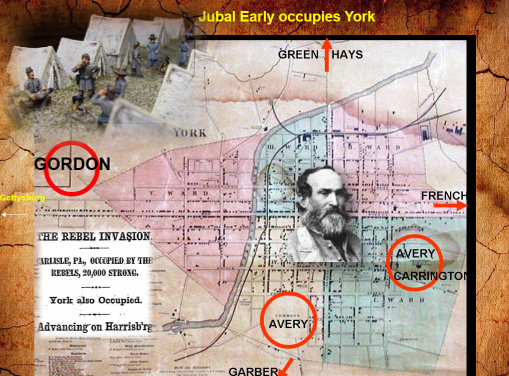 In giving frequent talks and presentations on Civil War topics related to York County, one of the most frequent questions I receive is the location of the various Confederate campsites in and around the city of York. Sometimes, the person wants to metal detect (almost impossible today because most of these old campsites are now covered with asphalt and/or buildings). Other times, the questioner is interested in why York so readily surrendered or why the town forked over more than $28,000 in hard cash to the invaders, and want to know how was the Rebel grip on the town. Others live near these sites, or have other reasons.

So, here is a quick summary of Confederate Major General Jubal Anderson Early’s main campsites during the occupation of York, the largest Northern town to fall to the Rebels during the entire Civil War. 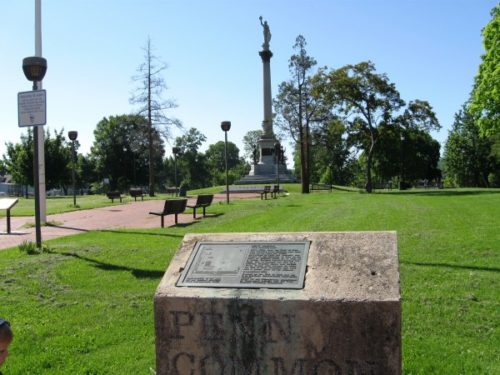 1. Brig. Gen. John Gordon’s Georgia infantry brigade – marched through York to Wrightsville on Sunday, June 28. Returned to York on Monday and camped off of Carlisle Road near today’s fairgrounds.

3. Brig. Gen. Harry T. Hays Louisiana Tigers infantry brigade – Most camped at the location of today’s Harley-Davidson factory north of York. Some men guarded the various flour mills (where San Carlo’s is today, and other mills north and south of that location along Codorus Creek up to Mundis Race Road). A few are reported as far north as Emigsville.

4. Col. Isaac E. Avery’s North Carolina brigade – Most occupied the wards of the U. S. Army General Hospital on Penn Common (see the above photo of modern Penn Park with the Civil War monument and wayside marker). The rest slept in the two open-air market sheds in the town square at the intersection of George and Market streets. When the Tar Heels left, Yorkers had to hose out the hospital buildings because of lice from the Rebel soldiers.

5. Green’s Louisiana Guard Artillery – Unlimbered on Diehl’s Hill facing south toward York. That hill is near the Harley-Davidson factory, and the guns were supporting the Tigers’ campsite.

6. Carrington’s Charlottesville (Virginia) Artillery – Unlimbered on the old York Fairgrounds just east of the intersection of King and Queen streets in what is now a residential neighborhood. This was the site of the Civil War Camp Scott, a former Union army training base. Some of Avery’s North Carolinans were also housed here. Captain James M. Carrington later spoke of the many York sightseers who came to the fairgrounds to see his four guns, limbers, and caissons.

7. Garber’s Staunton (Virginia) Artillery – Unlimbered on Reservoir Hill (then known as Shunk’s Hill) facing north toward York. No known infantry support, but it is likely some were present to protect the gun crews. Captain Asher Garber reported that at least two of his men deserted the camp and were never seen again.

8. Tanner’s Courtney (Virginia) Artillery – Went with Gordon to Wrightsville. Camped not far from Gordon off of Carlisle Road. Local tradition suggests the four guns were parked in what was then a field off of Taxville Road. Captain William Tanner’s battery was in action at Wrightsville on Sunday night, June 28, 1863, firing forty rounds of ammunition at Union militia positions. Two of Tanner’s guns were near the Mifflin House, now in danger of being razed to build an industrial park. That site marks the farthest east any Rebel artillery reached during the entire Gettysburg Campaign, and this part of the old Wrightsville battlefield absolutely deserves to be saved and interpreted, not destroyed.

9. Col. William H. French’s 17th Virginia Cavalry – Reportedly camped in various farms in what was then Spring Garden Township (now Springettsbury), including the Elmwood Mansion’s original location. Some of French’s men, likely a company or two, were on a hill just north of Emigsville near the intersection of Church and George streets. Condos now cover the reported site.

10. Lt. Col. Elijah V. White’s 35th Battalion, Virginia Cavalry – The least certain of all the campsites. “Lige” White nor his officers left any firm record of their whereabouts, and the damage claims filed by Yorkers after the Civil War only state “Early’s cavalry,” which could be either White’s 200+ men or Colonel French’s larger regiment. Most of White’s cavaliers, and Company C of French’s 17th Cavalry accompanied Gordon in the attack on Wrightsville on June 28. They came back to York via the railroad, burning all the bridges between the river and downtown. Some of White’s men are believed to have camped near today’s East York Walmart; some at other farms along E. Market Street/Route 462, with at least one detachment accompanying Gordon to Carlisle Street.

11. The wagon train – Early did not bring a large number of wagons with him, only ammunition wagons, medical wagons/ambulances, and a few supply wagons. He left the bulk of his baggage wagons and supply wagons at Greenwood, PA, on June 26 before heading eastward toward Gettysburg and on to York. Most of the divisional wagons that were with Early’s column appear to have been left north of town, but the location remains uncertain. Each brigade’s wagons camped with the respective brigade, as did the cavalry forges and wagons and the artillery supply wagons.

Do you have any oral traditions of Confederates camping on your ancestors’ property in or around York? If so, please share them via email to scottmingus@yahoo.com.

By the way, there were also a few Union campsites in York, most of them far longer in duration than the brief stay of the Confederates.