Confederate mapmakers prepared for the invasion of Pennsylvania 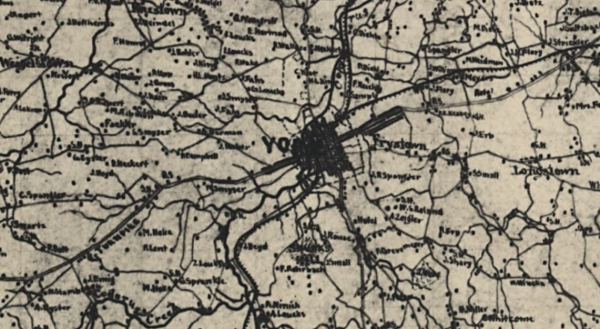 During the winter of 1862-1863, famed Confederate generals Robert E. Lee and T. J. “Stonewall” Jackson planned a possible invasion of the North, with a focus on central Maryland and south-central Pennsylvania. Jackson had long advocated such an incursion, aimed at breaking key Union supply lines such as the Cumberland Valley Railroad, the Northern Central Railway, the Baltimore & Ohio, and the Pennsylvania Railroad. Supplies, food, anthracite coal for the U. S. naval blockaders, reinforcements, ammunition, and other war materiel flowed through this network to reach the major Union supply depots. During the Valley Campaign of 1862, Jackson had told Confederate Congressman Alexander Boteler that is were given enough men, he would take the war to the banks of the Susquehanna River.

In late February, 1863, General Jackson called in his energetic and prolific mapmaker, Jedediah Hotchkiss, and asked him to make a map “extending from the Rappahannock to Philadelphia.” Hotchkiss was to keep this “a profound secret.” The implications were clear — Confederate high command was getting serious about a trip to the Susquehanna River.

The map (entitled “Map of parts of Pennsylvania, Maryland, and Virginia covering areas from Harrisburg to Leesburg, and from Hancock to Baltimore”) would pave the way for the eventual twin Confederate thrusts to the river in late June 1863, including Maj. Gen. Jubal A. Early’s invasion of York County, Pa.

Jed Hotchkiss had attended college in New York near the Pennsylvania coalfields. After graduating in 1846, he spent a year as a schoolteacher in the Lykens Valley, an anthracite region in northern Pennsylvania. He studied the mining industry and geology of the coal deposits. After completing the term, he and a fellow teacher walked the Cumberland Valley and explored the area well into Maryland and Virginia. His firsthand knowledge of the region proved valuable in constructing his detailed, accurate maps.

Based at Moss Neck, Virginia, Hotchkiss and his assistants pored over the available commercial and military maps of Northern Virginia, Maryland, and southern Pennsylvania. These included the 1860 Shearer & Lake map of York County, Pa., as well as maps of Cumberland and Adams counties.

In addition, he utilized intelligence from a series of operatives in the targeted regions. Locally in York County, stories abound of a one-armed “Bible salesman” and some assistants who went throughout the region collecting information, supposedly to help identify potential customers for their Bibles when they returned in the summer. 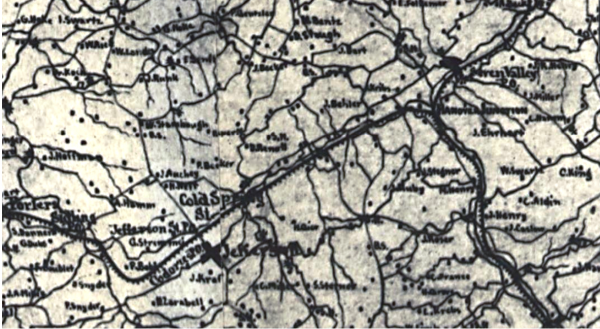 This section of the detailed Hotchkiss map shows the Hanover Branch Railroad from Porters Sideling to its intersection with the Northern Central at Hanover Junction. Key farmers, businesses, roads, towns, and railroads are denoted.

The final map was in sections and mounted on cloth in two large sheets which could be laid side by side if desired. Robert E. Lee’s staff used this map to plan the invasion of the North in what later was termed the Gettysburg Campaign.

The original Hotchkiss map is in the collection of the Handley Library in Winchester, Virginia. A photocopy is in the Library of Congress and appears on their website, from which photographs were adapted. Click here to see the map in its entirety.

Hotchkiss by the war’s end had made more than 200 military maps. In 1948, the Library of Congress acquired the maps, as well as Hotchkiss’s diaries and private papers from his last surviving descendant.

And, by the way, local legend says the one-armed spy came back to York in uniform during the invasion and left a box of Bibles, fulfilling his promise to bring them with him when he returned in the summer.

To read in depth about the Confederate invasion of York County, see any number of useful books and resources, including Jim McClure’s East of Gettysburg and our mutual books Civil War Voices from York County, Pa. and Echoing Still: More Civil War Voices from York County. Details of J.E.B. Stuart’s invasion of Hanover and western York County can be found in John T. Krepps’ fine book A Strong and Sudden Onslaught and in Wittenberg and Petruzzi’s Plenty of Blame to Go Around. Details on Jubal Early’s march through York to the river are available in my book Flames Beyond Gettysburg.